Barber Motorsports Park winner Alex Palou says he’s in love with his champion teammates, Scott Dixon and Jimmie Johnson, but doubts they reciprocate the feeling when he’s pestering them.

Palou, who held off Will Power and Dixon to score his first IndyCar win in his inaugural race for Chip Ganassi Racing-Honda, said he’s been bugging the six-time and reigning IndyCar champion and NASCAR legend but IndyCar debutant Johnson.

“And I'm the same with Jimmie: ‘How do you keep up winning seven championships? How do you do it?’ So I think every time they see me around they are like, ‘Oh no, this guy again!’ But I'm enjoying it. I try to learn everything from them.

“I'll tell you that I've never been around a champion like them until this year. Seeing how they work, you understand why they are able to win that much.

“I was surprised when I saw Scott that's been doing INDYCAR for, I don't know, 20 years, and has been winning six championships that he was at the [race]shop every time I was there. So I was like, ‘Man, this is not possible.’ Like if I see him every time it means that maybe he's there more. So I started going more and more, and he just works a lot.

Asked what he learns from watching Dixon, Palou replied: “I learn that you've got to keep working as hard as possible every day, not only in the races, not only when you are struggling. You've got to go to work.

“Maybe not tonight. Maybe tonight I can have a good fatty dinner because I like fatty dinner after a win. But tomorrow I have to go 8:00 a.m. and work and prepare for St. Pete, because that's what they do, that's how you keep on working, and that's what I'm going to do tomorrow.”

Palou described joining Chip Ganassi Racing, which has taken its drivers to 13 championships over the past quarter century, as “50 percent of my dream.”

He went on: “One of the dreams was to come here to the U.S. and once you are in the U.S. you want to be more and you want to be competitive, and to be competitive I wanted to be part of [Ganassi]. I actually introduced myself to Chip at the Indy 500 because I wanted to be part of that team. I saw the spirit of the team, just because of the years I was following. And yeah, to be part of Chip Ganassi [Racing] is 50 percent of another dream, which is to become a champion.

He continued: “When you are part of a big team and a successful team like Chip Ganassi, they give you all the tools. Like you have everything you need to win, and that's why you see so many successful drivers [there]. So I just have to thank the team for giving me the opportunity and all the sponsors.”

Asked about his championship prospects, Palou agreed it was achievable but was going to stick to the one-race-at-a-time mantra.

“This championship is so long that you need to take it one race at a time, and yeah, maybe when it's three races to go we can start talking about what's really the championship or how is it going. But at the moment let's focus on St. Pete, try to do the best result we can there. If we have a car to finish fifth, try to finish fourth, and that's what we're going to try to do all year.”

Regarding the race itself, Palou, who started third, said that the team switched strategies because eight of the first 11 laps were run under caution, firstly due to a Lap 1 crash triggered by Josef Newgarden, and then a spin and stall by Johnson. That swung the team’s decision that a two-stop strategy would be faster – a point proven by Palou, Power and Dixon finishing 1-2-3 on two-stoppers, and polesitter Pato O’Ward getting mired in the pack while completing his three-stopper.

“The first plan was to do a three-stop,” said Palou who became Ganassi’s first ever winner at Barber Motorsports Park. “I think to do a two-stop you had to go really, really slow just because of fuel mileage, but as we got two yellows, it was clear. Like as soon as the first yellow came I was already thinking on two stops. I was trying to save as much fuel as possible there.

“To be honest, I saw that [early leaders] Alexander Rossi and Pato [second and first respectively] were not saving that much fuel. I was wondering, ‘Are they going to just not even try to do it or do they just know how to do it and not me?’ I was surprised that they didn't go for a two-stop because I think it was fairly easy after the two yellows.

“But hey, I didn't call a two-stop; it was the team. They just told me, ‘Now it's time to push. Do 15 more laps and this is the target for fuel mileage that you have to do. So that's what I did, and it worked.”

Asked by Motorsport.com if he could have matched O’Ward and Rossi for pace, had the race played in the favor of the three-stoppers and he had stuck to that original strategy, Palou replied: “You never know. You never know what could happen, but I think I [would have been] able just because when we started pushing, like when we were racing with them, I was saving fuel already. like I was hitting my numbers and I was just keeping my tires and saving fuel to be able to go for a two-stop.

“I didn't know they were not, so that's why I was like, ‘Man, they are pushing a lot and they have some more pace than me. But it was just that I was fuel saving and they were not.

“I thought Pato was strong, so it would have been something with strategy that we could do to overtake him, and with Rossi I think we could have done something on track to overtake.”

Palou, who scored his first podium in only his third ever IndyCar race, driving for Dale Coyne Racing at Road America, said he was ‘a hundred percent’ confident that this weekend’s performance at Barber was a good omen for Ganassi’s pace in the remaining road course races.

“I think everybody could see from free practice that Chip Ganassi did an amazing job over the winter, especially on qualifying. Like qualifying … they struggled a lot [on road courses] last year, and suddenly first race and you put three cars in the Fast Six!

“I think it's going to be good also when we go back to Indy road course, to Mid-Ohio, to Road America. You never know if you're going to have such a good day as yesterday [in qualifying]. But we'll try and we'll work for that.” 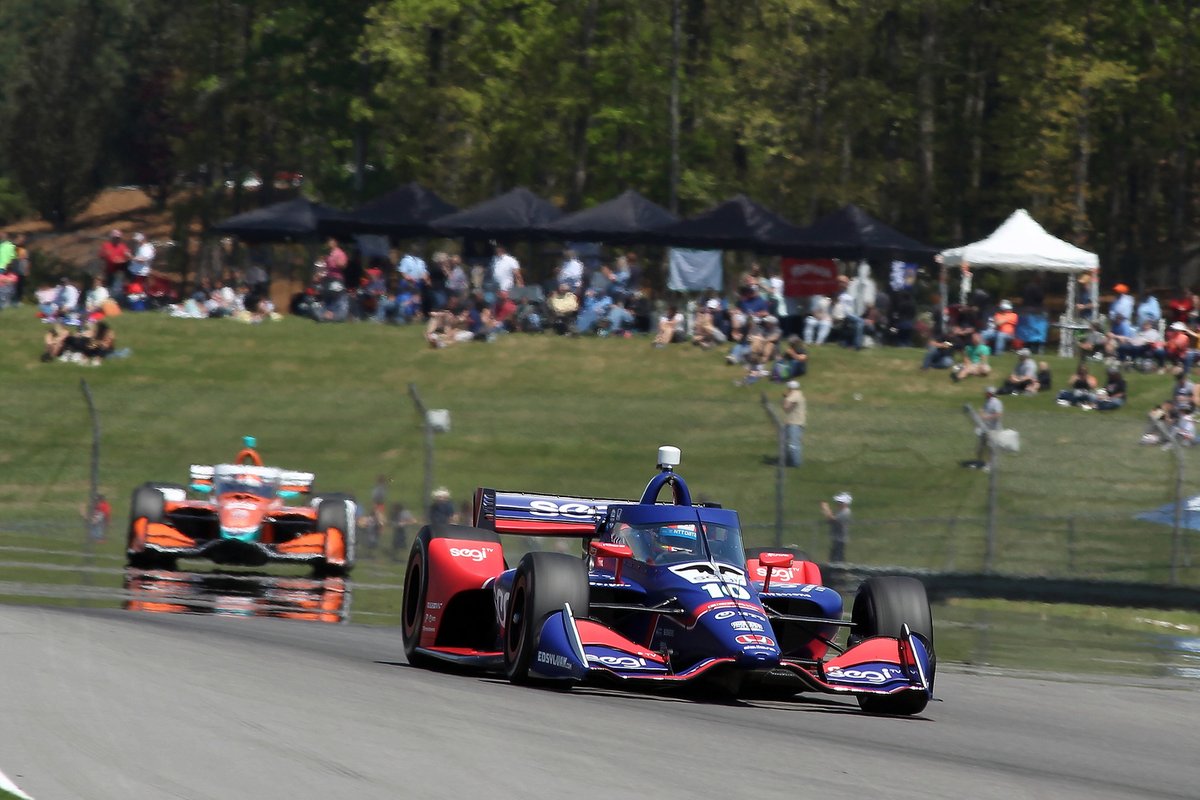 Lundgaard under the radar but top of the rookie standings

Ericsson on Palou clash: “Nothing wrong with that move”

Palou says he was faster than McLaughlin but couldn’t pass

Lundgaard under the radar but top of the rookie standings

Palou says he was faster than McLaughlin but couldn’t pass