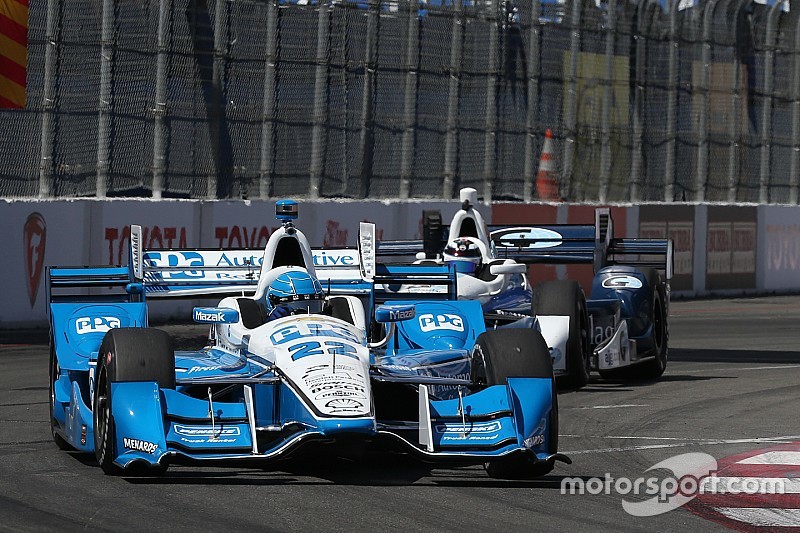 The #22 Penske driver had a lucky escape from censure after he put all four wheels over the blend line as he exited the pits on his crucial final stop. That move meant he just held off the earlier-stopping #9 Ganassi machine to hold on to the lead, but Race Control let it go with a warning.

Over the remaining 26 laps, Dixon could not quite get on terms with Pagenaud, and only backmarkers allowed the winning margin to close to 0.3sec.

Behind the lead pair, Castroneves and Montoya were third and fourth for Penske, 2013 Long Beach winner Takuma Sato was fifth and highest-placed Honda, while Tony Kanaan and Will Power were sixth and seventh for Ganassi and Penske, respectively.

At the start of lap 4, Pagenaud was pressuring Castroneves for the lead, while Dixon had fallen back by a second.

Hinchcliffe was holding onto Montoya, just 0.4sec behind him, while holding off 2013 Long Beach winner Takuma Sato.

On lap 5, Charlie Kimball pitted his #83 Chip Ganassi Racing-Chevrolet for a set of red alternate tires, and four laps later Jack Hawksworth was doing the same in the AJ Foyt Racing-Honda, and Max Chilton emulated them on Lap 12.

By Lap 10, Castroneves had a 1.4sec over Pagenaud who was a similar distance ahead of Dixon. Kanaan was still trying to pass his teammate, while Power held back, one second behind Kanaan, with Montoya a further 0.6 adrift.

Hunter-Reay was falling off the pace of Sato by lap 12, and 10th placed Newgarden was was looking antsy right behind him, as the #28 car’s slower pace was backing him into Carlos Munoz (Andretti Autosport-Honda, Daly, Bourdais and Graham Rahal (RLLR-Honda).

Finally, Newgarden and Bourdais broke the deadlock and pitted early, on lap 21, as did Mikhail Aleshin in the second Schmidt Peterson Motorsport-Honda. Hunter-Reay pitted on lap 23, emerging right ahead of Bourdais.

By lap 25, Power was 2sec adrift of Kanaan, but still 0.8 ahead of Montoya when he pitted. But a strong inlap and outlap and a clean-pit stop meant he emerged ahead of the #10 Ganassi car which pitted two laps later. That left Kanaan to hold off Montoya who had pitted a lap after Power and a lap before TK.

Castroneves, Pagenaud and Kanaan pitted on lap 27, Dixon on lap 28, and that was enough to jump the defending race winner ahead of Pagenaud, who now also had to watch his mirrors as Power bore down on him.

Hinchcliffe was the big loser in the pit stop shuffles dropping from 7th to ninth, while Sato and Newgarden moved into seventh and eighth places. Behind Hinch, Rahal and Sebastien Bourdais ran 10th and 11th, ahead of Daly but Hunter-Reay had fallen into anonymity, tumbling down the order after his pit stop. He would make his second stop as early as Lap 40.

With Dixon holding off Pagenaud, Castroneves was able to pull away to the tune of 2.5sec, and resumed the lead when Kimball pulled in for his second stop.

By lap 33, Dixon had trimmed the deficit to Castroneves to under two seconds, and by lap 36 it was down to 1.3sec, and there it stayed for 10 laps. In fact, given that there had been no full-course yellows, it was impressive – although a by-product of fuel saving - that by half distance the top nine cars were covered by just 10sec.

But on lap 47, Dixon was inching closer to Castroneves, while Montoya was also beginning to size up Kanaan.

On lap 48, Rahal made his second stop after falling some 2sec behind Hinchcliffe, but all eyes were on the front as Dixon pulled right up on Castroneves as they hit traffic, and then pitted on lap 51 to switch from blacks to fresh reds.

On lap 52, Castroneves and Power followed suit, leaving Pagenaud to take the lead, while Dixon’s scorching out lap ensured he jumped Castroneves. Meanwhile Power had a refuelling hose issue that led to a slow stop, and saw him jumped by Montoya, Kanaan, and Sato after their pit stops.

Pagenaud emerged from his Lap 54 pitstop ahead of Dixon ahead after some great laps in front but his exit from the pits went under review as he drove over the blend line with all four wheels. However, Race Control let him off with a warning.

News of that reinvigorated Dixon’s efforts to pass the #22 Penske, as Castroneves fell 4 seconds behind by lap 65, leading Montoya, Kanaan, Sato, Power and Hinchcliffe.

This order remained until lap 67, when Sato passed Kanaan for fifth place.

With 10 to go, Pagenaud had a 0.8sec margin over Dixon, and the pair of them were over 7sec clear of Castroneves, while at the bottom of the Top 10, Bourdais moved past Rahal for ninth and Newgarden followed suit two laps later to take 10th.

On lap 75, Sato was on Montoya’s rear wing, looking for the pass, but JPM hugged the inside line into Turn 1.

Backmarkers in the final lap allowed Dixon to close back onto the tail of Pagenaud, but the Frenchman did everything right to open his win account with Team Penske and score the fifth victory of his IndyCar career.