INDIANAPOLIS (Oct. 3, 2013) - The heat has been turned up literally and figuratively on the IZOD IndyCar Series Championship as it heads south for the final doubleheader event of the 2013 season. Championship contender Simon Pagenaud is focused on staying cool-headed as he heads into one of the most important race weekends of his career at the Grand Prix of Houston. 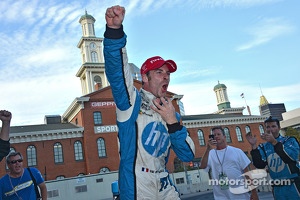 Pagenaud is currently third in championship standings, 70 points behind leader Helio Castroneves, after his win at the Grand Prix of Baltimore last month.

"I'm excited to go into the Grand Prix of Houston third in points because I don't have the pressure that the drivers in front of me have," Pagenaud said. "I'm just focusing on myself and my performance in the HP car. I can't wait to get back to work."

Momentum has been a crucial factor for Pagenaud and the Schmidt Hamilton Motorsports team over the last three races in Mid-Ohio, Sonoma and Baltimore.

"We've showed the most strength of any team in the past three races by scoring more points than anyone else," Pagenaud said. "We'll obviously be riding that wave in Houston. Being a doubleheader race weekend, we have two chances to maximize points and close in on Helio (Castroneves)."

Although it has been a month since the last race, Pagenaud has kept busy in the No. 77 Schmidt Hamilton HP Motorsports Dallara/Honda/Firestone car. He participated in Firestone Racing's tire test at the Indianapolis Motor Speedway on September 11th and 12th, and tested at Auto Club Speedway on Sept. 24th.

"It's been a long break, but we've stayed busy testing," Pagenaud said. "I've remained very focused on the Grand Prix of Houston during the break because it's going to be a huge race weekend for us. To challenge for the championship we need to have a strong showing to stay in the hunt."

Rookie teammate Tristan Vautier spent his month out of the No. 55 Angie's List Schmidt Peterson Motorsports Dallara/Honda/Firestone car testing, visiting his home in France and even playing the role of a race fan.

"I went home to France for 10 days! It was so great to see my family and friends after not having been home since February," Vautier said. "I attended a race of the French GT Championship and got to see a lot of my old racing friends too.

"Apart from that I participated in the development of the new Indy Lights tire compound from Cooper Tires with testing at the Indianapolis Motor Speedway and the Milwaukee Mile. Later in the month I got to test at Auto Club Speedway with Simon (Pagenaud) to prepare for the season finale. That track is very different in an IndyCar than it was in an Indy Lights car for me last year so it was a big bonus to be able to get a first impression of things before we go there in a few weeks for our race."

As Schmidt Hamilton Motorsports and Schmidt Peterson Motorsports prepare for the 10-turn, 1.683-mile street circuit at the Grand Prix of Houston, the teams have opted for similar strategies to what they brought to Baltimore.

"It looks like Houston will be very bumpy and is primarily made of concrete, similar to the Baltimore circuit," Pagenaud said. "Our car should be fast again, so we'll arrive in Houston with a similar car and not try to revolutionize the set-up. If our cars aren't fast we'll deal with it but we should be starting from a good point with the data we have from Baltimore. I'm very much looking forward to the challenge."

IZOD IndyCar Series action begins in Houston for practice and qualifying on Friday, October 4. Race 1 will be broadcast on NBC Sports Network on Saturday, Oct. 5 at 3 p.m. ET, and Race 2 will air on Sunday, Oct. 6 at 1 p.m. ET. For the latest updates from Schmidt Peterson Motorsports and Schmidt Hamilton Motorsports during the race weekend, follow @SPMIndyCar on Twitter.