Pagenaud on Indy 500 win: “Today was about attacking” 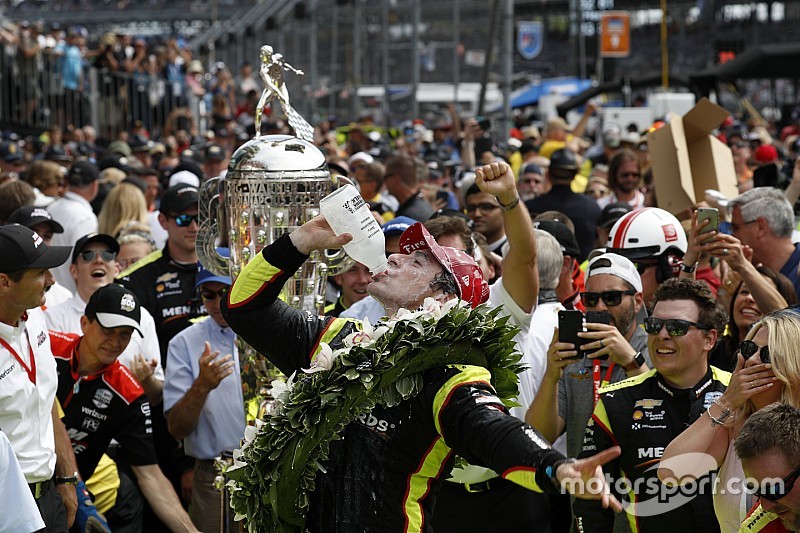 Team Penske’s 18th Indianapolis 500 winner said that the stars aligned to allow him to simply attack from the start of the 103rd Running of the Indianapolis 500 presented by Gainbridge and to “take our fate in our own hands.”

The 2016 IndyCar Series champion, who has driven for Team Penske-Chevrolet since 2015, led 116 of the 200 laps, fought a fierce duel with the Andretti Autosport-Honda of Alexander Rossi and became the first Frenchman to win the Indy 500 since Gaston Chevrolet in 1920.

He declared: “It's amazing. It's another dream come true, and the biggest dream of my life come true. It's hard to fathom really. It's really hard to process it right now, but I'm just filled with a lot of joy. I drove really spirited today, but it's just incredible.

“I can't take all the credit because I think … it showed I had the best car out there.

“We've had so many times we thought we could have won the race, especially since 2015 when I joined Team Penske. I think '15 was one of those years, I think last year was one of those years for sure. In '16 we had a mechanical issue that took us out, but we were running second. You know, there's been a lot of races we were strong, but we never really executed to the end.

Pagenaud said he wasn’t worried when Rossi passed him on Lap 198.

“Obviously I led most of the race, so I didn't have – except when I was passing back markers – big knowledge of my car in traffic,” he commented. “We ran so much up front we didn't save enough fuel. When I let Josef [Newgarden] by [on lap 151] the car was phenomenal, and it was really easy to follow for me. So we adjusted the car really well during the race.

“Obviously [strategist] Kyle Moyer and Ben Bretzman, my engineer, were giving me the perfect information. I think we had the perfect amount of downforce on the car, all the right decisions were made. The car was just fantastic, and I realized that I could run second as long as I wanted and pass people when I wanted.

“Rossi I knew was going to be the biggest threat for a while because he looked really strong. He came back from the back and he's always really strong in these races, so he was a bit of a concern. But yeah, I let him by to save fuel again just before the yellow came out, so that was a bit of a bummer. But we were able to get him back.

Referring to the fact that he also now matched Power’s 2018 sweep of May, with victory in the Grand Prix on the IMS road course as well as the 500, Pagenaud commented: “I think it's fate. Obviously in racing you need a little bit of luck on your side. You need everything to go your way. So it did today. I could do nothing wrong, quite frankly – and sometimes I can't do anything right! That doesn't mean I lost my talent, that doesn't mean my team is not doing a good job. It's just you have to accept that there's a little bit of mystery out there that you can't control.

“All you can do is the best you can and extract the best out of yourself in every situation. The rest, it sorts itself out really.”

Pagenaud said that he expected the win to have a lot of impact in his country of origin, but he also thanked his adopted home, America.

“I've got 330-something texts… and I'm sure it's going to keep coming. Actually people in France are sleeping right now, so I'm sure tomorrow morning will be pretty crazy.

“I'm just so, so proud. Obviously flying the French flag like this, obviously there hasn't been a winner in a long, long time, almost a century, being the next one is just phenomenal. I'm so proud. Proud of myself, proud of my country, and I'm happy that I'm giving smiles after the burning of Notre Dame was a catastrophe. It's good for the country to just give back, give some smiles and make people happy. That's what sports are all about. It's about transporting joy and adrenaline and fun. That's what we did today.

“I'm so proud that I think France is going to be very excited. Obviously the numbers talk for themselves. I'm sure we'll do a media tour there, as well.

With the Indy 500 being worth double points, Pagenaud has moved into the lead of the NTT IndyCar Series championship by one point ahead of teammate Newgarden who finished fourth today.

Said the jubilant winner: “I want many Indy 500s and more championships. I told Ben Bretzman before the month, “Knowing our momentum, we can win the next two and be in the championship, and it’s happened.

“So we're going to go into Detroit with a really good street car. We've done a lot of work on that car, and I think we're going to be strong there. So I'm excited. I love that track. That's the place where I won my first Indy car race in 2013, so we'll try to make it happen again.

“But that's my next box, obviously – to win another championship. I got so close in '17. It would be awesome to add some numbers.

“But some day I want to go back to Le Mans and win it, but…I'm not in any rush. I've got more to accomplish here. I want to keep driving for Team Penske forever and keep winning races. Le Mans would be one of my dreams, and another dream is to win the Monte Carlo Rally, but that's for a long time ahead. Probably when I'm 45, 48 years old.”

Asked if his rivals should be scared about his potential over the remaining 11 rounds of the 2019 championship, Pagenaud replied: “We still have work to do for the championship. There's been a lot of very competitive teams. It's not going to be easy. We're going to have to work really hard at this.

“But certainly I think we've hit our stride. I think we've understood what I need from this car and how to get it. That was the biggest thing. We knew what I needed. It was how to get it. We did get that. Very comfortable on the oval now. I love the package. And on road course and street course, I think Team Penske has done a phenomenal job now, and I think our team is going to be very strong.
“Yes, the goal is to win the championship this year. There's a lot to achieve still, and we're going to get back to work tomorrow. But I hope everybody is scared.”

Rahal slams Bourdais for Indy shunt: “He obviously doesn’t get it”