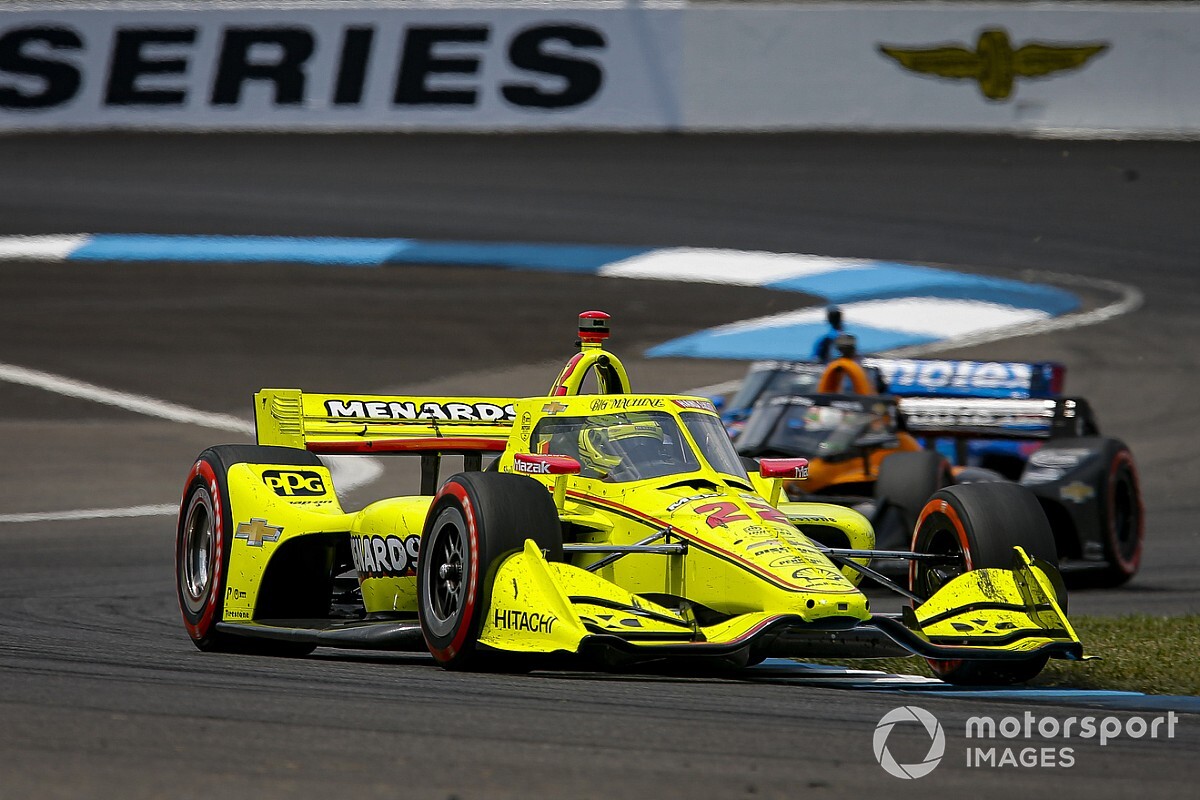 Team Penske-Chevrolet driver Simon Pagenaud says that rising from 20th on the grid to finish third in IndyCar’s GMR Grand Prix of Indianapolis was a result of a setup breakthrough, strong strategy, Chevrolet power – and going into attack mode.

The 2016 IndyCar champion, a three-time winner on the IMS road course failed to make it past the Q1 stage of qualifying and had to start on the 10th row of the grid.

Come the race, pitting earlier than his rivals and then exploiting his subsequent grip advantage enabled him to make passes, and crucially, too, Pagenaud had already pitted for a second time not long before the race’s only full-course caution.

“We weren't totally happy starting the race,” he said, “and we adjusted the car and then got better and better, and we were also able to keep the tires underneath us really well. Made a lot of ground in the pit sequence by really pushing really hard when everybody pitted and gained a lot of ground that way.

“The yellow also helped us a bit because we had pitted already five laps before, so that did help us. But at the end we had good pace. It was very hot, so thanks to all the training I put in because it was a very physical race.”

Explaining the #22 team’s tactics, Pagenaud said: “We started on black [primary tires]… we were going to do three stops and attack. The pit window was very open, so you could pit early and jump back in a sequence of pit stops. With worn-out tires you had more degradation than other years, so coming out of the pits on new tires, you would actually gain a lot of time, so the undercut was very interesting, and we played that game a lot, and it gained us a lot of position at the beginning of the race.

“I pushed myself 100 percent from the beginning. I did a little bit every pit sequence with a lot of use of push-to-pass… I think the Chevy power played a big role in the comeback. We were able to pass cars. We were really fast down the straightaway. We also trimmed the rear wing, but the balance was decent.

“Overall it was an attack race, and the yellow fell five laps after we pitted. It worked out well for us.”

Like many drivers, Pagenaud felt the severely reduced airflow to the cockpit caused by the aeroscreen made for tough circumstances on a 90degF day in Speedway, IN, but he says he dug in.

“Whether it was me being exhausted in the car, I never gave up. I had just enough juice to go after Graham at the end. That's my nature. I don't give up. And I love that feeling of pushing myself further than I think I can go…

“I got spanked [in qualifying], frankly. I was like, ‘Man, what did I do wrong? What was that all about? There's always something to learn from it. I came back with the lion's spirit that I have, teeth out.

“The warm-up was a blessing. It allowed us to try something that was completely kind of the opposite of what we had in qualifying, and that allowed us to recenter and know exactly where we needed to be… What I love about the #22 team is how they rebound, how we rebound in general. It's like there's a no-giving-up attitude, and I love that.”