Fontana, Calif., (Oct. 19, 2013) - Simon Pagenaud rounded out his sophomore IZOD IndyCar Series season with a 13th place finish in the MAVTV American Real 500 after a roller coaster race, but more importantly the Frenchman captured third place in the series championship. 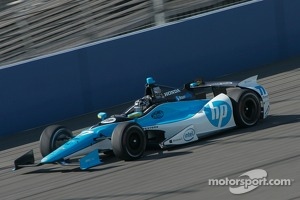 Pagenaud started 13th, but a tire issue early on forced him to pit earlier than scheduled. The No. 77 Schmidt Hamilton HP Motorsports car was not held down for long, however, after falling a lap down to the race leaders.

"The first few laps were difficult because we had an issue with our tires," Pagenaud said. "Luckily we were able to recover from that. We had an incredible race car, and I couldn't believe how strong it was in traffic. We drove our way back from one lap down to eighth, and then we even ran as high as fourth."

After blowing his way through the field on the 2-mile D-shaped oval at Auto Club Speedway, Pagenaud's forward march was halted when he experienced an engine issue.

"We had a top-five or top-six car, but unfortunately we had an engine issue in the end," he said. "It's unfortunate but we were so strong all night."

The 29-year-old Frenchman believes his showing tonight proves that his Schmidt Hamilton Motorsports team is a true threat in the IZOD IndyCar Series.

"We've been able to show that we can be strong on each type of track now," Pagenaud said. "It's only our second year but we came home third in the championship, which is seriously cool. I'm so proud of the guys and the HP team for what we've accomplished this year."

Rookie Tristan Vautier, driving the No. 55 Angie's List Schmidt Peterson Dallara/Honda/Firestone car, started 23rd on the MAVTV American Real 500 grid. Vautier was acclimating to the fast pace and numerous passing lanes on the D-shaped oval when he was collected in a 5-car crash in the exit of Turn 2 that was set off by a spin from Justin Wilson. 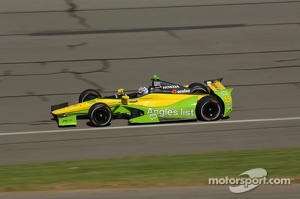 "I just went through the smoke and I didn't even see that I was going into Justin (Wilson)," Vautier said. "I had nowhere to go and I was in the middle of the smoke. Then I just felt the impact. It's a shame because we were trying to stay out of trouble and finish strong for Angie's List."

Vautier completed 110 of 250 laps prior to the incident and finished 21st.

Will Power of Team Penske won the MAVTV American Real 500 at Auto Club Speedway. The 2013 IZOD IndyCar Series Championship went to Scott Dixon of Ganassi Racing. The series will resume action in 2014 at the Grand Prix of St. Petersburg on March 30.