"We had bad luck with our first pit stop because the yellow flag came out right after we pitted, losing us a ton of track position"

HOUSTON (Oct. 6, 2013) - Simon Pagenaud entered Race 2 at the Grand Prix of Houston hoping to catapult himself even deeper into the hunt for the 2013 IZOD IndyCar Series Championship, but he was relegated to a sixth place finish after starting third. 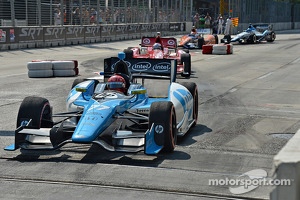 Drivers lined up on the Grand Prix of Houston starting grid by entrant points after a morning qualifying session was canceled due to heavy rain at the 1.683-mile temporary street circuit.

Pagenaud, driving the No. 77 Schmidt Hamilton HP Motorsports Dallara/Honda/Firestone car, held third position through most of his first stint until an ill-timed caution flag after his first pit stop resulted in him losing valuable track position.

He battled back up to sixth, but fellow championship contender Scott Dixon finished second, leaving Pagenaud 55 points behind Dixon's total of 546 points.

"It's unfortunate because we struggled with time management here all weekend in Houston," Pagenaud said. "We didn't struggle on restarts nearly as much today as we did in Race 1, but we had a difficult time managing the (Firestone) red tires in the rear of the car. That's something that we still need to strive to understand as we move forward."

Pagenaud did gain ground on Helio Castroneves in the championship hunt, however. Castroneves leaves the Grand Prix of Houston with 521 points in second, just 30 points ahead of the No. 77 car.

"I have no regrets after today's race," Pagenaud said. "I tried as hard as I could just as the team did. We missed the championship this year but we can be very proud to be sitting third. We still have the opportunity to grab second from Helio (Castroneves) and it's been a great season overall. We're disappointed today but we gave it our all and we'll be back ready to fight in Fontana for the season finale." 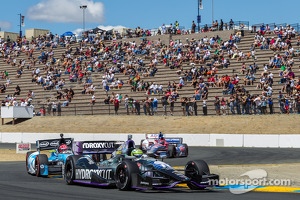 Tristan Vautier drove the No. 55 Angie's List Schmidt Peterson Dallara/Honda/Firestone car from 18th to 11th in Race 2 at the Grand Prix of Houston. Vautier suffered the same fate from the first caution period of the race as his teammate.

"We had bad luck with our first pit stop because the yellow flag came out right after we pitted, losing us a ton of track position," he said.

There were nine caution flags peppered throughout the 90-lap race, and the rookie had difficulty keeping debris off of his Firestone tires during the caution periods.

"Under the long yellow flag during my second stint I got pickup on my tires from weaving back and forth too much trying to keep them warm," Vautier said. "I fell backward for three or four laps after that."

Vautier avoided a three-car incident on the final lap of the race and brought home an 11th-place finish.

"After struggling in the second stint, the rest of the race was about trying to charge back," he said. "I had a few good moves in the last stint and our pace was great. It's a disappointing weekend because I feel that we had more to show in the Angie's List car, but the Schmidt Peterson Motorsports team was so great to repair my car after a few incidents during the weekend. It's a positive end to the race to come in 11th though and now we're focusing on the last oval race in Fontana."

Will Power of Team Penske won Race 2 at the Grand Prix of Houston. Scott Dixon and James Hinchcliffe followed him to the checkered flag in second and third position.

Ups and downs for Barracuda Racing on day 2 at Houston