O’Ward not frustrated by another victory near-miss 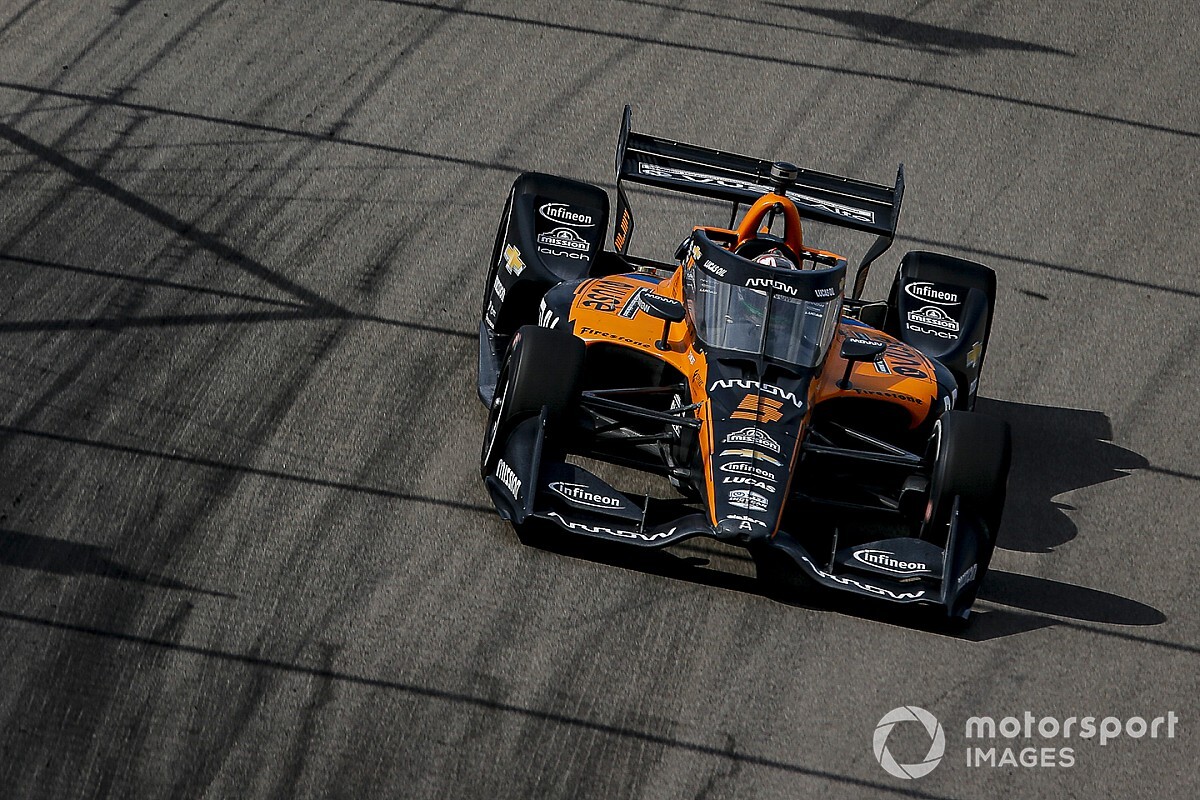 Despite being narrowly beaten to the checkered flag at Gateway on Sunday, Arrow McLaren SP-Chevrolet’s Patricio O’Ward says his season is “great”, and is convinced “our win will come.”

The 21-year-old Mexican driver scored a runner-up finish in the second of the Bommarito 500 races at World Wide Technology Raceway on Sunday, backing up a third place that he scored in Race 1.

He has now scored three podiums this season and a pole position, but today he was narrowly beaten out of pitlane in the final round of stops by Josef Newgarden. On a day when passing was so hard, that proved the pivotal moment of the race, for while both of them vaulted the traffic-hindered Will Power, it consigned O’Ward to once more follow a Penske, and he was never close enough to try a serious move on the leader. The race then finished under yellow when Takuma Sato hit the wall, ending O’Ward’s chances at a last-gasp effort to usurp the leader.

But asked if he found another near-miss frustrating, O’Ward responded: “Not really, man. I'm honestly having a great year. I'm third in points. I'm scoring podiums. I'm technically a rookie. To be able to be challenging for [a win] in my first year, I think I should be very happy with that.

“Obviously we want to win. We're in this to win. But we're in this to be on podiums, as well. We just keep getting better and better. We're working together, stronger each race weekend. Yeah, we just have to keep doing what we're doing, executing how we have been, our win will come.

On the subject of whether he might have had a chance of winning, he said: “I could probably get within a car length or two. But it was really tough to follow because the train of cars in front of Josef was massive. If maybe there were no more cars in front, maybe it would have been a bit easier to close up on him and try to get a run.

“It would have been extremely difficult. My only chance was on the pit exit. I had so much understeer.

I have so much respect for Josef. He is one of the fairest if not the fairest and cleanest drivers in the paddock. So competitive but yet he's not dirty. I know that I can really race him hard without putting both of our races in jeopardy. Honestly, I tried on the pit exit when I was on his outside but couldn't quite get it done.”

Power, who finished third and was competing closely with O’Ward in both races at WWTR this weekend, said of his rival’s progress this season, “It's very strong, very strong. Always knew he was really fast. We saw that in Indy Lights and the few races he did in IndyCar last year.

“He's right where we all expected him. He's definitely going to be a force to be reckoned with in the future.”

O’Ward said the 21degF higher track temperatures in Sunday’s race had made the track slicker and therefore more difficult to pass, and didn’t lay the blame on the oil-dry mixture that had to be laid down before the start of the race after a track-sweeping vehicle leaked oil onto the course.

“For me it was the heat [that was the problem],” said O’Ward. “The track was quite a bit hotter than yesterday. I feel like that made it harder. Kind of like yesterday being [like] Carb Day at Indy, then the race being today, where it's just hotter, just tougher to follow.”

Power, who finished third, added: “It's simply the weight of the car now. It's obviously a much heavier car. You lose a lot more grip, mainly the front, when you try to get close to someone. You basically need two lanes. That would make the racing really good.”

Power said the tire dragon device, which consists of piles of tires towed around by a truck to attempt to lay down rubber in a second lane, made no difference.

“Nah, it does nothing,” he said. “They run a powdery thing into it. Does nothing.

“It's got to be hot rubber that's pressed into the surface. Our cars produce, in this configuration, 4,000 pounds of downforce. With hot rubber being pressed into it, if they had a machine that did something like that it would work.”