“It was tough out there today, but that’s what we expected"

HOUSTON, Tex. (October 5, 2013) – A spirited drive by National Guard Panther Racing driver Oriol Servia in Race One of the Shell/Pennzoil Grand Prix of Houston concluded with a DNF as the Spaniard was poised for a Top Ten finish. Servia, who started in 17th, had driven to inside the Top Ten and was preparing for his final pit stop of the afternoon when his No. 4 National Guard inexplicably stalled on the racetrack. 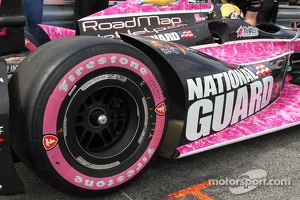 Servia was making his fifth start for Panther on what was the team’s first career start on Houston’s 1.634-mile temporary street course. The team wasn’t able to qualify until earlier this afternoon as IndyCar officials were making alterations to the first turn of the track to repair a section that was causing cars to launch off the ground. Officials completed the work overnight and the teams qualified earlier in the afternoon in preparation for today’s 90-lap race.

After a series of caution flags to begin the event, the track finally went green and Servia was able to make his way up the grid. He quickly advanced inside the Top Ten to ninth place before the National Guard team made its first pit stop. Servia returned to the field and quickly got into a battle with Justin Wilson and Charlie Kimball as his pace increased dramatically throughout his second stint. Servia moved to eighth position just before he prepared to pull off to make his final pit stop, but his car unexpectedly stalled in Turn Three on Lap 64. The team was unable to diagnose the problem in pit lane and Servia concluded the race in 19th position.

Ganassi Racing driver Scott Dixon captured the race victory and was joined on the podium by Simona De Silvestro – capturing her career-best finish of second place – and Wilson in third.

Oriol Servia, No. 4 National Guard Chevrolet: “It was tough out there today, but that’s what we expected. Our car was so great and I really thought we were going to be able to give the National Guard guys a good race. Baltimore was awesome for us, and when we got here I had a great pace. I was just waiting for our last stop. I don’t know what happened – it looked like we lost fuel pressure – but we’ll have to see.”