Newgarden: “We absolutely can win the championship” 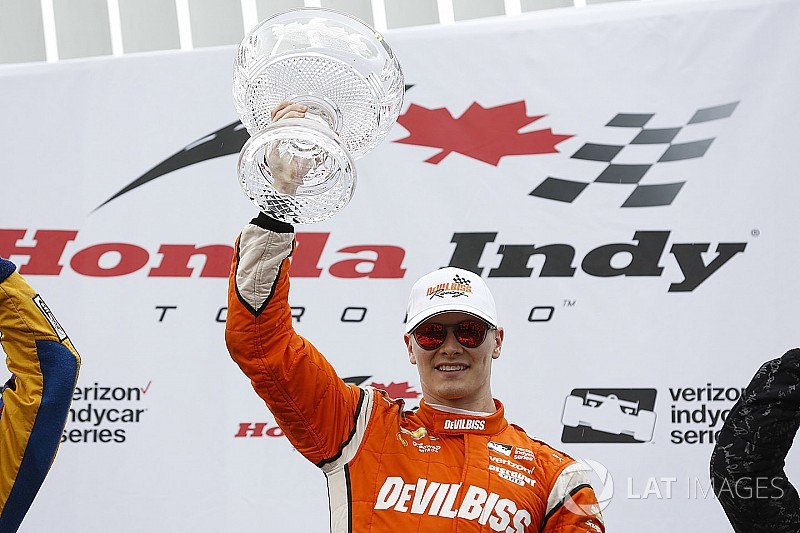 Toronto winner Josef Newgarden believes that solid consistency could see him finish the season at the top of the points table, in his first year with Team Penske-Chevrolet.

Newgarden scored his second victory of the year – and fifth of his career – and has climbed to fourth in the championship, just 23 points behind leader, Chip Ganassi Racing-Honda’s Scott Dixon.

He said: “It's a good day for us, specifically on the #2 car. I think for Team Penske as a whole, it's a good day with where Scott finished [10th]… I’m excited about that.

“The big thing for us is we can't get into any more incidents like we have the first half of the year. I think month of May is really what killed us in the points championship. We had a bad GP with a pitlane speed limiter issue, and a bad Indy 500 wrecking out with 20 laps to go, getting caught up in something.

“We've had some races that we've had to pick up from a deficit, and I think if those weren't there, we'd probably be leading the championship. But other guys can say the same thing. They'll say, ‘We had races like this, too.’ It kind of yo-yos back and forth for everybody. Everyone is going to have good races and bad races.

“We have to prioritize having solid finishes from here to the end. I think if we're the most consistent, we absolutely can win the championship. It's going to be the guy who does that the best.”

Although Newgarden admitted he was fortunate to have teammates Helio Castroneves and Simon Pagenaud, as well as Graham Rahal, get relegated by the closed pits following Tony Kanaan’s full-course caution-inducing accident. But Newgarden pointed out that he thinks he may have had the pace to fight for victory anyway.

“I think track position was a big thing today. I didn't get to see the race from really the middle or the back. But I have to think it was very difficult to pass people today. If you got track position, I think that was king.

“The yellow for sure played a part in winning this race. It was a good call at the right time for the #2 car guys and Tim Cindric. That was the first domino for us to fall and after that it was a matter of managing a race, making good fuel mileage and driving fast.

“I think if it didn't fall for us, we could still potentially come out victorious. It's impossible to predict, if we didn't catch the yellow, would we have won the race? I have no idea. Maybe we would have finished fifth or fourth or something.

“After the first start, we found ourselves in fourth position after we missed Will [Power’s] and Scott's incident, so it was a really good start for us. From there we still had a plan we needed to have track position. That was our go-to plan to differentiate ourselves between us and the leaders. If the yellow didn't fall, we were still doing something like that. How it would play out, I have no idea. The yellow just worked perfectly.”

“We were still fast, still up there. Always will take a little bit of luck. I think we all would. It's funny because Rick Mears told me one time, ‘You'll have more days where you should have won the race and things go against you and you don't win the race, than you have days where it go goes your way and you end up winning the race.

“So the days it goes your way and you get something lucky, you just take them. Because there's more days where you could say, ‘We should have won that race.’ So I'll take a lucky yellow any day of the week.”