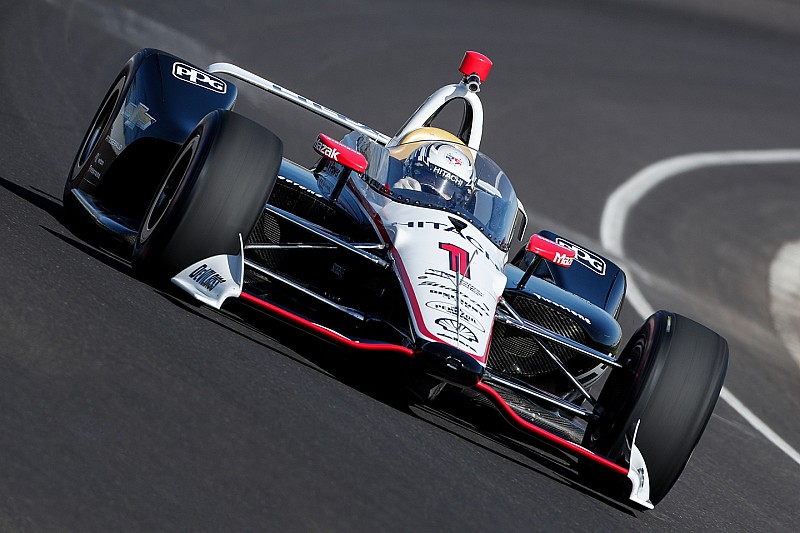 Reigning IndyCar champion Josef Newgarden tested the #1 Penske-Chevrolet with a modified fitment for the series’ proposed cockpit screen, although it took further adjustments until he was comfortable.

Following the end of the Open Test, Penske rolled the car onto pitlane fitted not only with the screen as tested by Scott Dixon at Phoenix’s ISM Raceway in February, but with further modifications.

A NACA-style duct has been added behind the shock-absorber access panel to feed cool air to the cockpit, while because of reflection glare, matte-black duct tape was put across the white nose of the Hitachi-liveried car, on the drivers’ side of the windshield.

After a couple of in and out laps, Newgarden had his tinted helmet visor removed and replaced with a clear one but also admitted that the aero path and low-pressure area within the cockpit was pushing his helmet forward.

“You’re not used to that much of a windscreen in front of you,” said Newgarden, who currently leads the 2018 championship points standings. “It was really interesting to try it out.

“The most interesting bit for me was the visor change, going from a fully-smoked visor to a clear visor. I actually thought that was better. It helped the clarity and visibility. So I think helmet manufacturers will be involved in this process in helping make it better and happier for the drivers.

“But overall, pretty clean and easy – easy installation today. It took us just 10 minutes and to be able to jump in and do 10 or 12 laps didn’t seem too difficult.

“There’s probably some small improvements we can continue to make such as the clarity of the visors and the perception of what it’s like to see through [the screen], but overall it was pretty easy to make it work. I didn’t have any major issues. So I think IndyCar did a really nice job.”

Newgarden added that the reduced wind noise was noticeable and that the engine note “sounded different with the wind not interfering”.

Regarding the NACA duct, Newgarden observed: “It alleviated some of the head pressure you get with not having the air on your helmet directed straight to you, so you have this back pressure that pushes your helmet forward.

“They cut that back pressure down by about 50 percent, and also you got some airflow inside the cockpit… If they said I could have more, I’d take it to get more airflow to the driver but to me it wasn’t too bad, it wasn’t crazy-hot.”

Further explaining the helmet visor issue, Newgarden said: “Because you wouldn’t normally run a clear visor on a sunny day, I started getting my face reflecting through the visor and that was bugging me a little at the end. But that’s something we can figure out with the helmet manufacturers to make a lot better.”

Newgarden also said that one of the question-marks over the screen remains its clarity deep into a stint, and that there may need to be further adjustments needed to adjust the path of the airflow.

“We were talking a little bit about what the dirtcar guys do,” he commented, “creating a little flip-up to push everything over a visor or over a windscreen. I think we can make that better because it was accumulating bugs pretty fast.

“It had tear-offs on it so we could make a tear-off change and have clear vision again but I think it’s something we’ll need to improve to direct the airflow much more over the screen.”