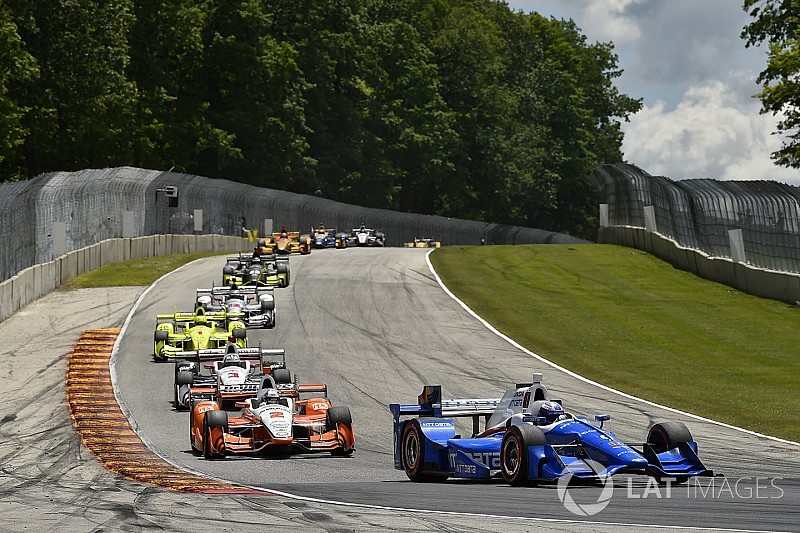 Runner-up Josef Newgarden, who led the Penske foursome in the Kohler Grand Prix, says winner Scott Dixon and Chip Ganassi Racing earned their win, although he regretted being on the wrong tires to defend his lead on the first restart.

Team Penske-Chevrolet’s Helio Castroneves, Will Power, Newgarden and Simon Pagenaud locked out the first two rows of the grid in qualifying, while Dixon qualified fifth but 1.6sec off pole. However, in the race, the Ganassi-Honda driver was able to move up the order by stopping a lap later than three of the Penskes.

His pass on Newgarden to take the lead on Lap 31 following a restart came when the Ganassi car was on red tires, and Newgarden was on the harder-compound blacks, which are more difficult to bring up to temperature following a full-course caution.

“Dixon and the whole Ganassi team did a great job and they deserved to win with the job they did.”

Toward the end Newgarden closed down the gap on Dixon, but came up 0.6sec short of re-passing him.

“I felt good about what we had and we had four strong Chevrolets all weekend with Team Penske,” he commented. “It stings a bit that we didn’t get the win because of how good this car was all weekend. We had the fastest lap which was pretty cool and I am just proud of all our guys. Just disappointed we couldn’t get it done.”

Dixon credited the Honda engine’s superior fuel efficiency for his 41st Indy car victory  and Pagenaud concurred that it had been crucial. He finished fourth, just behind Castroneves and just ahead of Power.

“Fuel had a big part in every stint,” he commented. “If you could go a lap longer it was gaining you a lot of time. We didn’t have as much fuel efficiency as Dixon, but Josef did an amazing job in the first stint. I think that is what helped him a lot.

“The car was great and one of these days all four guys are going to be at the front. We were really fast and we raced each other hard but we didn’t have enough push to pass at the end unfortunately.”

Power, who lost a place to Newgarden at the start and temporarily fell behind Ganassi’s Max Chilton and Charlie Kimball after a restart, said: “We were just caught up in things all day. The Verizon Chevy was fantastic just as it had been all weekend.

"I battled well with Dixon on that first stint. Maybe we could have gone one more lap on that first set of tires, but the fuel numbers might not have worked out, so we played it safe.

“My hat is off to Scott. I felt pretty good about a Team Penske victory today, but [Ganassi #9 team] did a great job.

“My guys gave me a great car and we didn’t have any problems in the pits. We gave it all that we could.”