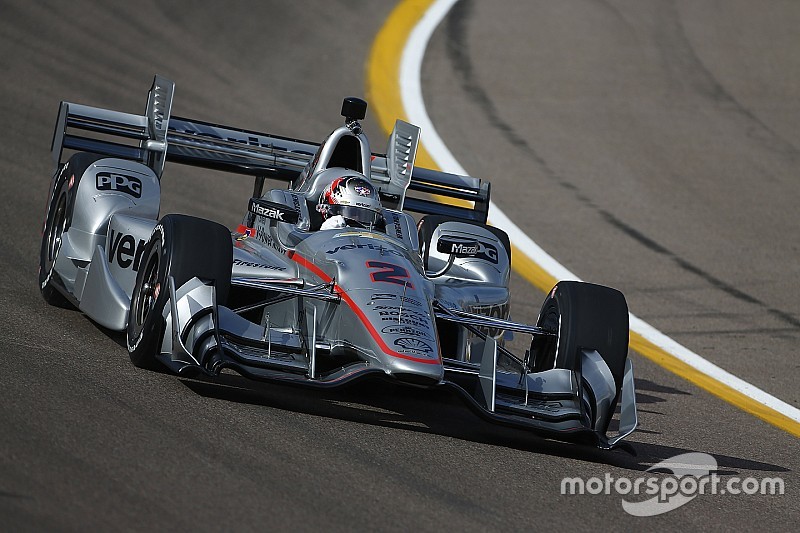 Josef Newgarden’s Penske-Chevrolet topped the first three-hour session in IndyCar’s open test at Phoenix International Raceway, and is so far the only driver to crack the 190mph barrier.

Until the final 20 minutes, Sebastien Bourdais had led Ed Jones in an impressive Dale Coyne Racing-Honda 1-2 at 186mph, but a late surge on new tires from several drivers saw the DCR cars drop to eighth and ninth. On Newgarden’s 39th lap of the day, the #2 Penske lapped the 1.022-mile track at 190.129mph.

In the end, it was Newgarden’s former team owner and teammate Ed Carpenter who came closest to deposing the Tennessee native, running a 189.990mph in the Ed Carpenter Racing-Chevy and knock Will Power’s #12 Penske down to third on 188.637mph.

JR Hildebrand, who this year will be a fulltime IndyCar driver for the first time since 2013, was an impressive fourth quick in the second ECR car ahead of Alexander Rossi’s Andretti Autosport-Honda. Indy 500 winner Rossi’s oval debut came at PIR last year.

AJ Foyt Racing had a difficult start to its relationship with Chevrolet, Carlos Munoz only 18th fastest despite completing the most laps of anyone (64) and Conor Daly’s engine had a fractured oil line, spewing Sunoco’s finest around the track on only his seventh lap.

The disappointment of the session was Schmidt Peterson Motorsports, Mikhail Aleshin and James Hinchcliffe pegged at 179mph in 19th and 20th.

Schmidt: “If we don’t win with both drivers, I’ll be disappointed”