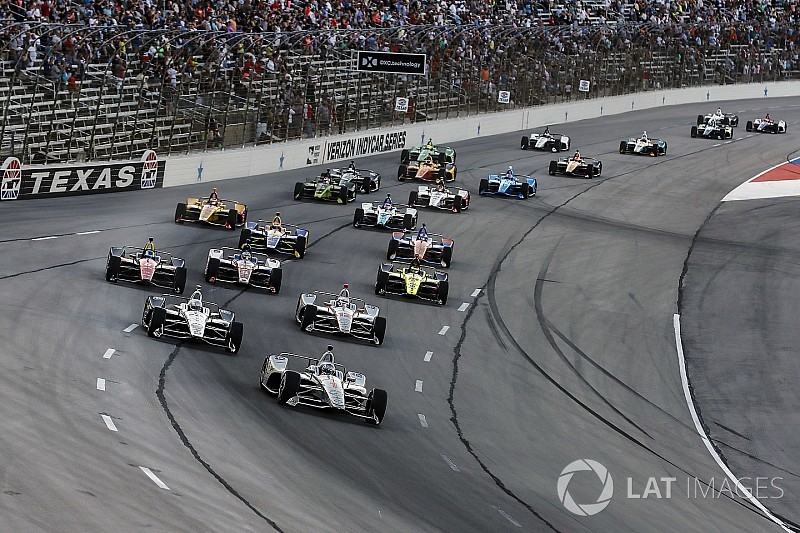 Team Penske-Chevrolet’s reigning IndyCar champion Josef Newgarden has criticized series Race Control for the imposition and nature of the penalty that saw him finish the Texas race four laps down.

Polesitter Newgarden was struggling with his raceday setup, suffering severe blisters on one set and a tire deflation on another, when he was penalized for jumping the final restart.

With the 60mph pitlane speed-limit being extended all the way around to the back straight for safety reasons – the cars are lighter on downforce and the warm-up lane was low on grip – a pitstop would cause drivers go two laps down to rivals who were still at racing speed.

To compound his tire misery, Newgarden was given a drive-through penalty for jumping the final restart. A further stop for a deflating tire meant he hit pitroad a total of seven times last Saturday night, compared with winner Scott Dixon’s four pitstops.

Newgarden told Motorsport.com: “At this point it doesn’t matter about the penalty because of the right-rear that went down – although maybe I picked it up while serving the drive-through!

“But I think Race Control has been so inconsistent and if this race was the one they decided to be aggressive, then… I think they need to look at the severity of penalties. On that restart, I didn’t pass anyone before the start/finish line but literally because I was out of line at the restart they call me for a drive-through which kills us because of them extending the pitlane speedlimit.

“If they’ve got an issue with my restart and want me to give up one or two positions, then fine. But putting us further out of the game by putting us two laps down is too harsh.

“And what they called us on tonight, they’d never called before. So I’m getting dinged on something they want to be aggressive on all of a sudden. OK, well now I know but I hope they’re consistent on this going forward, for everyone.”

Regarding tire blistering issues, Newgarden said that rivals who hadn’t suffered similar problems to the Penske-Chevrolets, which had qualified 1-2-3, provided some encouragement.

“It seemed like other people were better than us,” he commented. “If you look at Schmidt or Ganassi tires, it doesn’t seem like they had the same problems we did, so I’d say this was just a miss by our team. It happens. But in a way that’s good, right? It means there is a solution out there – it’s up to us to find it.

“I thought our car was really good, it felt great in Friday evening practice and I think our guys did a really good job. But I think when we discuss it together, we have to see how we can survive a race stint. The car was quick, but didn’t work throughout a whole stint, so if we repeated this, we’d get the same result.

“Between us three drivers and our race engineers, we should be able to come up with a solution that doesn’t cause all the blistering.

“The [second] stop, the one I got way out of sequence on, the tire was destroyed and I about hit both ends of the car on the wall because the floor of the car hit the ground. I went into Turn 3, the floor hit, and I just about hit the wall in Turn 4.

“So that got us way off sequence and because of this stupid pitlane speed limit thing around to the back straight, you lose two laps by pitting, so you can’t even catch up.”

Newgarden is now fifth in the championship, 66 points behind leader Dixon.

2019 IndyCar development to be defined in August “at the earliest”