Newgarden not apologetic for pass on Pagenaud 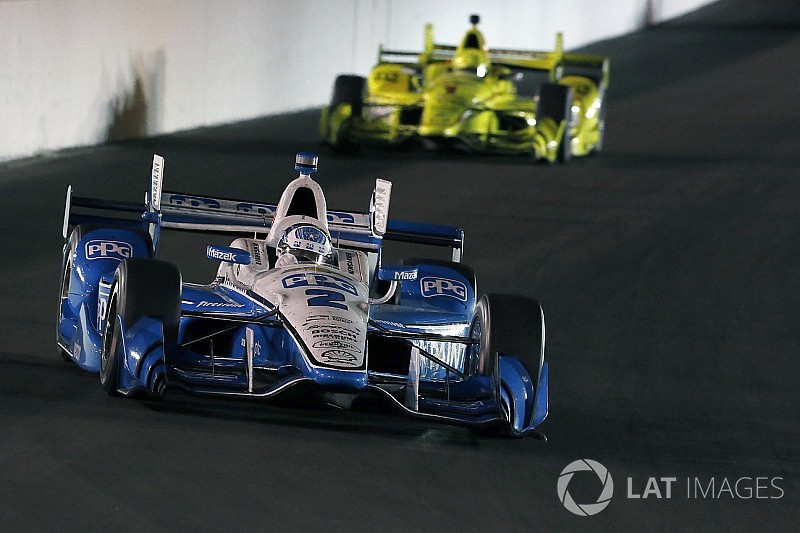 Josef Newgarden says he will continue to race with Simon Pagenaud the same way, despite the reigning champion’s anger at how he lost the lead at Gateway Motorsports Park.

Pagenaud had taken the lead of the Bommarito Automotive Group 500 by nosing his Penske-Chevrolet out of the pitlane ahead of teammate Newgarden by a minimal margin under yellow. At the start of Lap 218, four laps after the restart, Pagenaud adopted the traditional defense of swinging low on the front straight to force his opponent to take the high line into Turn 1 if he were to make a pass.

However, Newgarden stayed in Pagenaud’s tow starting Lap 218, and when the 2016 champion moved slightly right to take a less compromised line into Turn 1, Newgarden squeezed into the gap on the inside.  The cars touched slightly as the pass was made and Pagenaud’s #1 car drifted up the track and lost momentum and second place to Chip Ganassi Racing’s Scott Dixon.

“Simon gave me a lane to work with,” explained Newgarden. “I had a good tow on him, put my car inside in the opening, got about halfway alongside of him. One thing I didn't want to do was touch him too hard. I think if I would have stayed too far left, I would have jumped the curb and taken both of us out.

“I tried to get Simon to move over a little when we were coming to the opening of the corner. We both had to slow up. Fortunately worked out well for us on the 2 car side. Pagenaud didn't get up into the wall or anything like that, so I would say it worked out OK for him, too.”

Newgarden, who has moved into a 31-point lead over Dixon in the championship battle and is 43 points ahead of Pagenaud with two rounds to go, said that the nature of the Gateway’s 1.25-mile course meant it wasn’t possible to make a clean pass before the turns. Instead, the attacking driver needed to get alongside and force his opponent to take a compromised line and lose momentum.

“If you looked at practice last night, there was no clearing people here,” he said. “You're not going to pass ’em and clear ’em before the corner. You're going to get halfway or three quarters alongside someone – that's how you're going to pass 'em.

“For me, I think what allowed the pass to happen was Simon left me a lane. I took the lane. That's about as far as I was going to get up on him. We ran hard into the corner. Had to check up and both got through there.

“I did see a replay and we did touch. I moved over on him one time… I kind of was hoping he would open the door a little more when I was alongside of him. He didn't open it any further. I feel like if I didn't move him just a touch, if I jump the curb, we both would have been in the wall.

“I honestly thought Simon was going to lift and move over once I was there. And he didn't. So then it was a matter of trying to sort it out when we were getting into the corner.

“But I think he's one of the world class drivers that you race against. That's what made that work. I can trust him to not lose the racecar and hold his own into the corner. Any other guy, he might not have had the ability to make it work. Simon has that and even more. So he's one of the best drivers in the world to go head-to-head with.

“[But] If you leave me a lane, I'm going to take it. Especially in the situation where we were leading most of the laps, we were in position to win the race, we lose out on a pit stop exchange. He's got to know I'm going to try to get back by him. That's not the way we want to lose the race.”

How Gateway hit a home run on IndyCar’s return