The 22-year-old, Josef Newgarden, drove at Baltimore in IndyLights Series in 2011, but he is completely new to the circuit in an IndyCar.

BALTIMORE - Josef Newgarden is looking forward to actually racing an IndyCar in this weekend's Grand Prix of Baltimore after being forced to watch the race from the Sarah Fisher Hartman Racing (SFHR) pit stand in 2012 due to a broken left index finger.

The 22-year-old drove on the 2.04-mile, 12-turn street circuit in the Firestone IndyLights Series in 2011, but he is completely new to the circuit in an IndyCar. 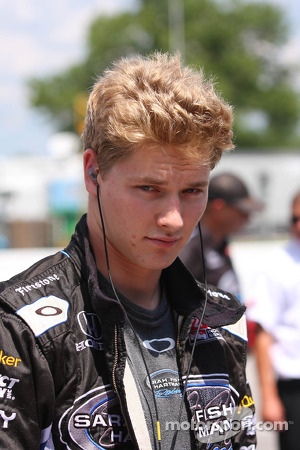 "Baltimore is a great track," Newgarden said. "I like the driving style that's required there and I think it translates pretty well to an IndyCar so it shouldn't be too big of a problem. I wish I could have raced there last year but it just didn't work out after the injury I sustained in last year's Go Pro Grand Prix at Sonoma Raceway."

The temporary street circuit that wraps around the Inner Harbor area of downtown Baltimore can be challenging for the IZOD IndyCar Series field, according to Newgarden.

Baltimore 1 "Baltimore is generally the bumpiest street circuit we go to all year, which brings its own challenges with trying to make the car work around there," he said. "

The curves and the front straightaways are just very bumpy and you can get airborne with the car.

"Setting up the race car for those aggressive bumps and surface changes can be really difficult, especially when you're trying to make the car go fast as well. There's a compromise that comes in at Baltimore and it's also one of the most understeer-driven tracks that we go to."

"Baltimore is a great city and it's a good location for a race," Newgarden said. "There are always great fans, good personalities in the city, and of course good restaurants."

The sophomore driver holds 17th place in IndyCar championship standings, with only four races remaining on the 2013 schedule.

"It's very important to do well and finish these last four races strong," Newgarden said. "It's been difficult these last couple of weekends, but we will be on top of our stuff and if everything goes according to plan we should have a fast race car and be ready to get solid points for the rest of the year."

To watch Newgarden and the No. 67 SFHR Dallara/Honda/Firestone car take off on the Streets of Baltimore, tune into NBC Sports Network at 2 p.m. ET on Sunday, Sept. 1