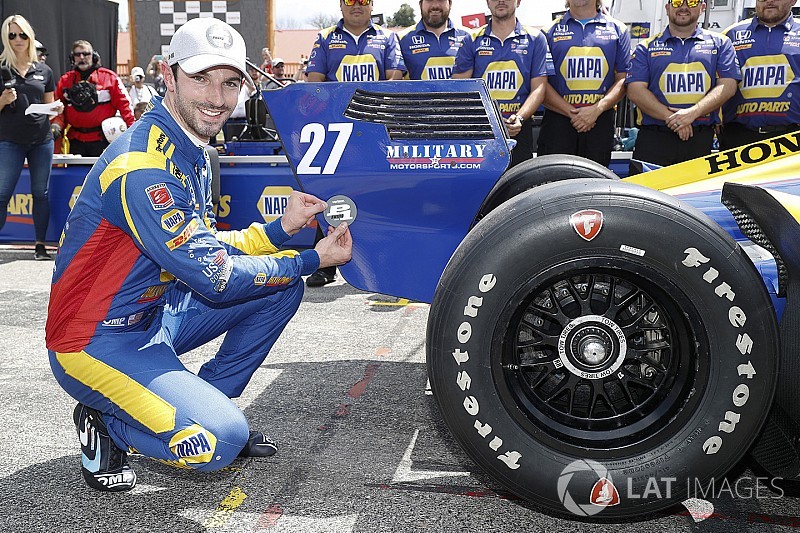 Alexander Rossi scored the fourth pole of his career and third of the season after completing just a single qualifying lap in the Firestone Fast Six, beating the best efforts of Team Penske-Chevrolet’s Will Power.

The biggest surprise was Max Chilton of Carlin Racing-Chevrolet earning sixth place in the team’s debut season. However, it’s not cruel to point out that while he performed well, Chilton’s promotion to Q3 was a direct result of circumstances in Q2 eliminating several more fancied runners.

Q2 saw James Hinchcliffe bring out the red flag with less than a minute to go with a spin and shunt, immediately after setting fastest time, losing his two best laps and dropping him to 10th. This brought this session to a premature conclusion, costing both Chip Ganassi Racing-Honda entries, Scott Dixon and Ed Jones, their last-gasp chances to advance, with the Rahal Letterman Lanigan Racing-Honda entries of Graham Rahal and Takuma Sato suffering a similar fate.

However Dixon, who will start his 300th Indy car race tomorrow, said that a previous lap would have gotten him through but both he and Newgarden encountered a slowing Rossi, who was backing up, trying to make space for himself. However, after several minutes of official review, the Firestone Fast Six was allowed to stand as is, with Hinchcliffe’s demotion earning Robert Wickens a reprieve.

Despite being eliminated in Q1, Conor Daly excelled himself – and Harding Racing-Chevrolet’s expectations – clocking a 65.7260sec lap that ensures he will start 14th, alongside Marco Andretti who was bounced out of Q1 Group 1 in the dying seconds by teammate Zach Veach.

Charlie Kimball completed a strong day for Carlin Racing with 15th, two places ahead of Simon Pagenaud in the third Penske-Chevrolet, as the 2016 champion (and 2016 Mid-Ohio winner) struggled with rear-end grip.

Pietro Fittipaldi was 22nd in his first qualifying session since his Spa sportscar shunt, but amazingly that performance put him ahead of Dale Coyne Racing teammate Sebastien Bourdais who ruined his own chances by going off on his second lap on blacks, bringing out a red flag. The car nosed into the tire barrier at Turn 2, and it would have cost him his best lap times even if he’d had enough time for repairs.