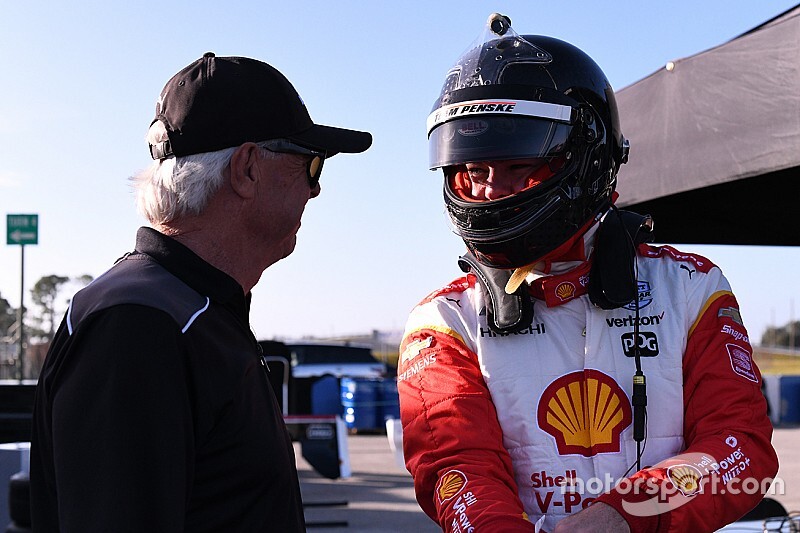 Penske president Tim Cindric told Motorsport.com yesterday that reigning and two-time Supercars champion McLaughlin could run the IndyCar Spring Training at COTA next month, as he was being considered for an extra entry in one or more NTT IndyCar Series races this year.

Mears, like current Penske IndyCar drivers Josef Newgarden, Will Power and Simon Pagenaud, attended McLaughlin’s inaugural IndyCar test at Sebring on Monday and was left impressed by the two-time Supercars champion’s pace, style and feedback, leading him to conclude that the 26-year-old would not be overwhelmed were he to compete in an IndyCar.

Mears told Motorsport.com: “Besides talking to Roger [Penske] and Tim, I don’t get involved in the decision-making end of things but it would be cool to see Scott get a shot in an IndyCar race. You know Roger, he always likes to have someone in the wings. Just like when he had Paul Tracy in part-time [in 1991 and ’92] it was perfect timing for when I decided to step out. And you know, God forbid one of our full-time drivers got injured or sick but it’s always good to have someone available that you can count on to do a very good job, and who you’ve worked with. And to me, Scott fits that description on both fronts.

“I’m sure the test was also a thank you from Roger for a job well done in Supercars – a little bonus, as it were. But it’s typical Roger that that wasn’t all the test was about. He’s always looking down the road and looking at possibilities, weighing them up.”

Said Mears: “Scott did a really good job. There was so much for him to get used to in a short amount of time and at a track he’s never been to. The sharpness in handling, the lack of bump absorption compared with the Supercars that he’s used to, the amount of car movement you get from those Sebring bumps, the much shorter braking zones, how soon you can get to full throttle, and so on.

“But he just stepped right into it and looked under control the whole time – and he was very smooth, which is hard around a track with all those bumps and surface changes and different curbs.”

Mears, who remains a driver consultant at Team Penske but who for many years served also as advisor for Indy Lights drivers and IndyCar rookies, also approved of what he heard from McLaughlin in discussions with the team’s engineers.

“His feedback was really good,” said Mears. “I left about an hour before the end so I didn’t hear his final debrief, but I was listening on the radio while he was out there and then his feedback between runs, and he was very strong. He had a good handle on describing how the car was behaving. When the team was making changes to the car, he had a good feel for what was happening to the car’s handling and what the changes did.

“Obviously at the start of the day he was just sneaking up on the limit and he admitted he still had a lot to learn but he kept chipping away at it. That was smart. He knew he couldn’t afford to step over the limit and then come back to it; he had to go the opposite way and just gradually push harder and harder. And that’s how he’ll do it if he gets to race IndyCars. He’s switched on.”

“Top talent is top talent, whatever the car”

Mears, as ever, insisted the best racecar drivers should be able to adapt to all circumstances. He drew comparisons between McLaughlin and Jimmie Johnson – who admits he’s interested in open-wheel racing when he quits NASCAR full-time at the end of this year – and between McLaughlin and Power, who joined IndyCar with just one oval race to his name but who’s now scored nine victories on left-turn-only tracks.

“Just as we talked about Jimmie being able to step into an IndyCar and pick it up quickly, I think the same is true of Scott,” said Mears, “especially because in Supercars he’s picked up so much road and street course experience.

“Sure, the cars are very, very different, but to me, it all boils down to just talent in general: that’s how I judge drivers. Top talent is top talent, whatever the car, and the best talent can drive whatever he sits his butt in. Some may take more laps to figure out the last one percent, but at the end of the day the talent will come to the top and they’ll figure it out.

“I think about Will [Power] and how little oval experience he had when the merger happened in ’08, the year before he joined Penske. I was watching the oval rookies at the first race [Homestead] and after three laps I could see from his natural line that he knew what he was doing. I thought, ‘Oh, he’s fine, he’ll be alright.’ He just had that natural ability to pick the correct arc into the corner and drive with smoothness.

“So then when Will joined us it was only a matter of time before he got his first oval pole nailed and got a first oval win under his belt. He had picked up ovals right away, even though his results were not as good as he was. As far as I was concerned, he had the ability almost instantly: then it was a matter of getting the confidence and dealing with all the other things that a race can throw at you.

“Now I’d say the same for Scott in adjusting to IndyCars. He hasn’t done what he’s done in Supercars without a heck of a lot of talent. I mean, it’s not like his wins have been here and there one-offs; he’s spent a lot of time winning over the past few years! So you’ve got to classify him as one of those top talents.

“But I like the fact that he’s not just looking at trying to set the greatest Supercars statistics of all time. He wants to go out and get experience of as many things as he can, and to me that’s the sign of a true racer. It would be really cool to see him in IndyCar.”