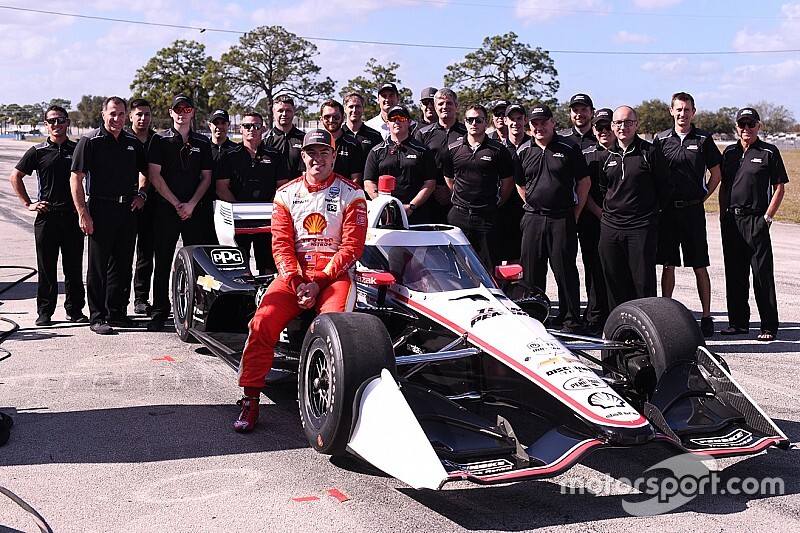 DJR Team Penske’s two-time and reigning Supercars champion was left awestruck by his first ever taste of IndyCar when he tested a Penske Dallara-Chevrolet at Sebring today.

The 26-year-old New Zealander said he completed “around 140 laps” of Sebring Raceway’s short course today, in a rare opportunity for a tin-top ace to try out a high-powered open-wheel car.

McLaughlin, who showed startling aptitude when he drove an IndyCar on Penske simulators last year, told Motorsport.com: “It was awesome – a really great day.

“For any driver preparing to drive an IndyCar, the simulator is such a good tool, because when I jumped on Sebring today, it was the first track I’d driven in an IndyCar for real but it was really good preparation.

“The only thing different was that my neck was getting absolutely torched with the G-loads. I was getting bashed from pillar to post, so that was a bit of an awakening experience. But it was really cool.

“I trained pretty hard and I was pretty good laterally with the loads. The team had put extra padding around my head, which I think is pretty normal for a new driver.

“But the first time I drove out of the pits and hit the brakes for the first time, I swore my helmet was going to hit the steering wheel! Unbelievable. I think I had been trying to just hold my neck up and not lean on the headrest.

“Once I started to actually use the stuff that was put in there to look after me, I was good.”

McLaughlin, who has scored 35 of his 43 Supercars victories behind the wheel of a DJR Team Penske Ford Mustang, said that as well as sampling an IndyCar for himself, he was also trying to contribute feedback that would be useful to the squad’s open-wheel regulars, Josef Newgarden, Will Power, and Simon Pagenaud.

“We definitely tried a few different things that altered the car’s handling, things that they would use,” he said. “They gave me different balances that some guys would like, some don’t. Whether my feedback tallied with what the other guys think, I don’t know.”

McLaughlin says he doesn’t know how fast he was because the team kept the timing monitors away from him so he didn’t keep pushing beyond his limits.

“I think I was there or thereabouts speed-wise,” he said, “but the team guys kept their cards pretty close to their chest about lap times because they didn’t want me to go too hard. The main thing for me was getting a decent feel.

“So I think I was putting down some pretty decent times but I’m not really sure. They literally hid the times from me which is pretty smart, because I’m a bit competitive.”

McLaughlin has made no secret of his interest in racing in America, but the talk has always been about his prospects in NASCAR. Asked if he would consider open-wheel racing, despite having never raced a single-seater more powerful than Formula Ford, McLaughlin was cagey.

“I’ve always said I’d race a wheelbarrow if there’s a Team Penske sticker on the side!” he chuckled. “But I think the opportunity today to have a sample, to have a crack at an IndyCar was amazing, and it definitely answered a lot of questions for me regarding strength, regarding fitness. And it didn’t feel too dissimilar to how I thought it was going to feel, which is good.

“But for me, I’d love the opportunity to be over here in the U.S., and I’ve always said that. The opportunity I had today was something you can’t really turn down, and I was just trying to enjoy myself and not look like a dick!

“I had a couple of little moments while I was just trying to find the limits of the car, but apart from that it was all good, and I didn’t rip a corner off – that was the main thing.”

Given the different driving styles required for a 750-horsepower open-wheel car compared with his regular Supercars Ford Mustang, a 650-horsepower touring car, McLaughlin admitted he now had a greater appreciation for why guest open-wheel drivers usually struggle to get the most out of the Aussie tin-tops.

“Oh yeah, absolutely,” he said. “It’s easier to go to high-grip, high-braking performance, compared with going the other way where you’ve got to get used to braking distances that are 100 yards longer and so on.

“IndyCar drivers are all decent drivers who could get on top of things if they had the chance, but when Alex Rossi and James Hinchcliffe went over to Bathurst last year, that was a tough initiation: Driving one race – at Bathurst, probably the toughest track of them all – I think they actually did a pretty good job in the circumstances. Supercars are just a difficult beast to get used to, and the way you’ve got to drive them is completely different.”