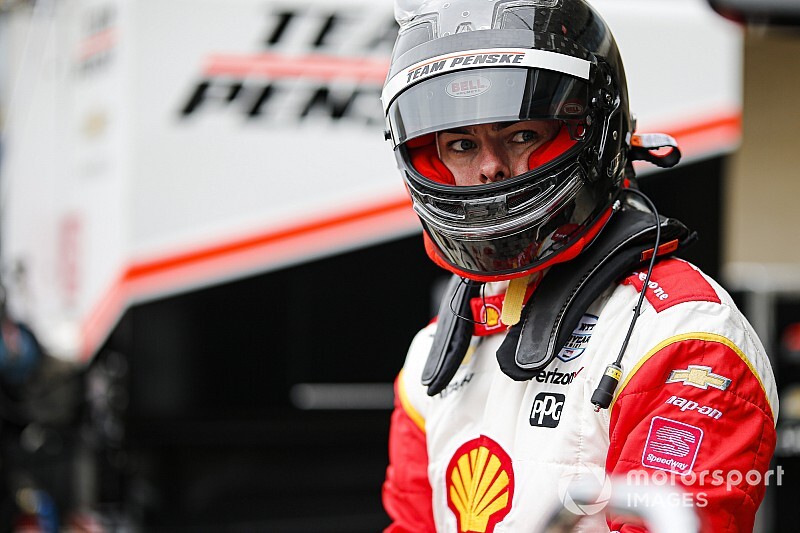 Just two days after his startling performance in IndyCar Spring Training at Circuit of The Americas in Austin, the DJR Team Penske ace was 200 miles north in Dallas-Fort Worth, learning about ovals at TMS.

“I successfully went the fastest I’ve ever gone in a racecar – on my out-lap!” he told Motorsport.com. “I loved it. I can only imagine what it’s like with 25 other cars around you…

“You have to be so precise, but it was really interesting how you have to slowly creep out [from the apex] and get a later arc exiting onto the back straight, and how you use the banking. I just really enjoyed it; it was a great day.

“I had to be very wary but the team were great with me, and put me out on a very high downforce setup and then just slowly trimmed it off as the day went on and I got more comfortable. Team Penske are the best to be with as a rookie because they know the car very well and are very smart about it all.

“So I was really calm before my first run because I knew they’d given me a pretty safe setup to let me acclimatize to my surroundings.

“It was a bit intimidating knowing there’s no room for error but I guess that’s what makes IndyCar drivers so good. I have a tremendous amount of respect for everyone who can run so close at those speeds.”

To prepare for his outing, McLaughlin said that he found onboard footage more helpful than simulator work.

“I watched 150 laps of Josef’s footage from last year’s Texas race,” he said. “Obviously I knew I wouldn’t have turbulent air today, which is obviously a whole other thing, but I watched the laps where he was by himself and watching that footage probably correlated best to what I experienced.

“The simulator was good too, but there’s no risk on that, so you get up to speed straight away! I’d rather just study Josef because he had plenty to risk, plenty to lose, and the onboard cameras are great because you can see the drivers’ hands and what he’s changing.”

McLaughlin said that just as the team had trusted him whereby they could free up the car as he became acclimated to the oval, so he trusted himself to experiment with the in-cockpit tools.

“I worked the weightjacker a fair bit and also the front bar,” he said. “I didn’t play with the rear bar.

“I could definitely feel the tools working – but it’s easy to lose confidence, which is interesting. If you suddenly don’t get a good feeling in the car, it can take you a good 10 laps to get the confidence back again.”

The area where McLaughlin most needed work were his pit stops, which are difficult on an oval given the reduced steering lock, and the lack of differential.

“Yeah, it’s a shame because I was starting to nail them at COTA, but I had to get used to them here [at TMS],” he admitted. “I need to work out the turn-in points a little better, because I came in a little crossed-up each time which made it hard for me to get out of the box again. But I’m learning.”

With the Supercars season starting next week in Adelaide, no further IndyCar test has been set for McLaughlin, so his next time in an open-wheel car may be opening practice for the GMR Grand Prix of Indianapolis in May. Understandably, therefore, the 26-year-old was playing down his expectations for his debut.

“The caliber of driver in IndyCar is so good, and the times are so tight,” he said.

“I’ve got a lot to learn but I’m just glad I got in the car and felt comfortable, I wasn’t too far off the pace, and I’m there or thereabouts.”