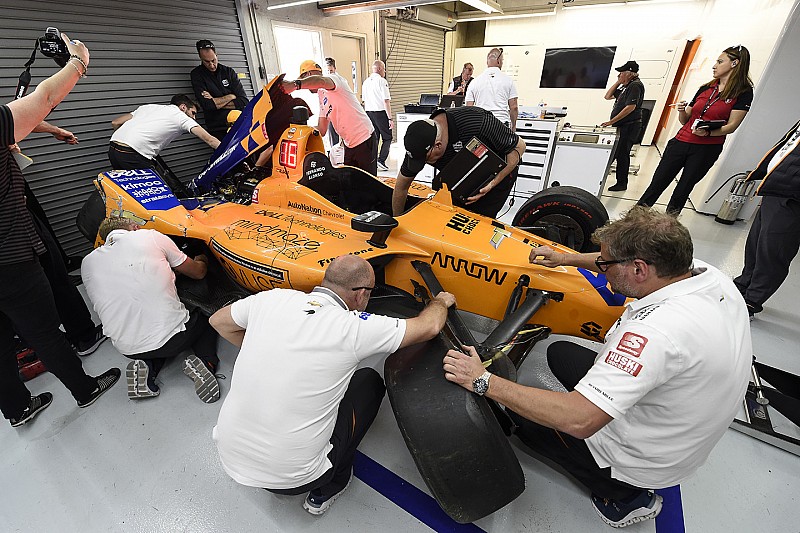 McLaren CEO Zak Brown says the atmosphere within the McLaren Racing IndyCar team is calm despite Fernando Alonso being left with just one practice day before qualifying for the Indianapolis 500 begins on Saturday.

Alonso has completed just 96 laps over the past three days of practice, with electrical issues on Tuesday restricting his running to 50 laps, before he crashed at Turn 3 on Wednesday having run 46 laps. By contrast, the busiest driver, Spencer Pigot of Ed Carpenter Racing, has turned 302 laps.

Following the shunt, McLaren has switched from its UK-built chassis to the Carlin/John Cummiskey-built car, fitting it with a fresh Chevrolet the original having suffered damage.

According to team sporting director Gil de Ferran in an official release, that engine change was “an additional workload.”

He went on to admit: “Not running today was a serious setback to our Indy 500 program, but all is not lost. We should have a full day of practice and preparations for qualifying tomorrow and our goal will be to have a nice, clean day.”

Brown told Motorsport.com: “We’re not allowed to have a true spare car [chassis and engine] so we’ve got to build it up and it’s important we get it right. It’s not ideal.”

Asked if there was a sense of panic that the team and Alonso are inadequately prepared for Fast Friday – where the BorgWarner turbos are turned up to 1.4-bar (from 1.3) and the cars are trimmed for qualifying simulations ahead of Pole Day and Bump Day at the weekend – Brown denied it.

“No, no, they’re relaxed,” he said. “Fernando is a little sore from his accident – his legs bent the steering wheel – but he’s fine.

"But you know what Indy is like. If you panic, that’s when you make a mistake so you’ve just got to keep your cool and build rhe car and get it right and make sure you get the setup right. It takes a long time on the setup pad to get the configuration, and I don’t think you can rush it."

Brown admitted that in this circumstance, being a separate entity and not just being part of the Andretti Autosport multi-car effort as McLaren was back in 2017 – and also doing Indy 500 as a one-off – is hurting the squad.

To put it in perspective, Felix Rosenqvist crashed his Chip Ganassi Racing-Honda 4.5 hours after Alonso’s shunt, but his new car was rolled through tech inspection at 10am this morning and was ready to hit the track when it opened at 11am.

“Being a new team is certainly a disadvantage as it takes time,” said Brown. “The guys are all very experienced but they’ve not worked together as a team before. So this is the first time they’ve had to rebuild a car overnight and you’re always going to do it a second time or third time or fourth time.

“But the only way to get through that is to be a new team once, learn from it. But they’re cool, calm and collected.”

Regarding the plan for car setup on Fast Friday – to either get Alonso’s confidence back with raceday downforce, or to launch into qualifying simulations with the car trimmed out – Brown said: “We don’t know yet. They want to see when we roll off where the car’s at, so I think tonight we’ll decide what tomorrow’s plan looks like.

“Fernando will be back on it from the first lap. But we’ve just got to make sure what the racecar’s like. None of them are identical – they should be, but… Once we get it on the track he’ll want to put his foot down right away but you need to go through the right system checks and show some patience.”