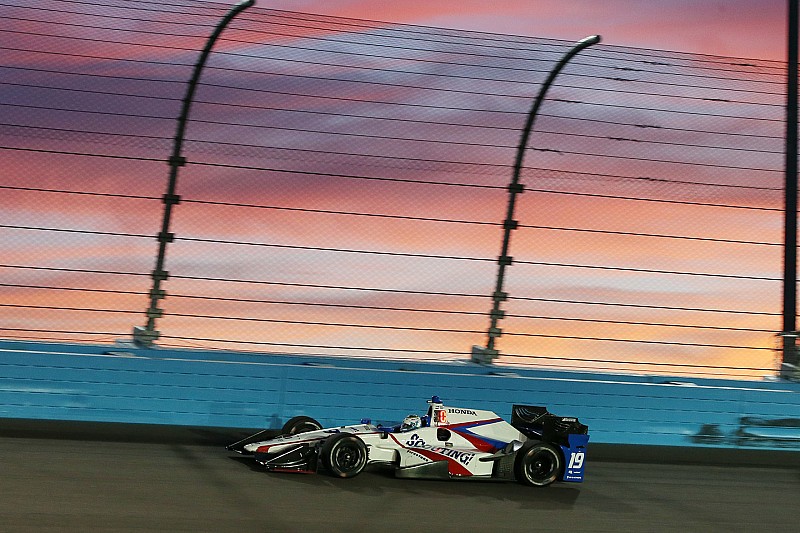 Dale Coyne Racing’s Luca Filippi says he is looking forward to oval races as part of his first full season in the Verizon IndyCar Series.

The versatile Italian, who entered four races for Bryan Herta Autosport in 2013, four for Rahal Letterman Lanigan Racing in ’14, and last year raced Ed Carpenter’s #20 car in all road and street course events, is set to make his oval racing debut at Phoenix International Raceway next month.

Last weekend’s test at PIR was only his second experience of ovals, and he said he enjoyed the outing.

Filippi told Motorsport.com: “It was good to have a test at Iowa Speedway [June 2015], so it wasn’t such a shock coming to Phoenix. The G-load you get into the corner is similar, but Phoenix is for sure a lot smoother, less bumps, and so less work with the steering wheel. But the effort is quite big.

Asked if he was intimidated by ovals, Filippi replied: “We all are, a little. But I’m a huge fan of motorsport in general, I follow every single category in the world in every single country in the world and I want to try every type of racing in my career – if I have the time! I’ve already tried several different specialties in motorsport – sports cars, open-wheel, GTs, Formula 1, rallies…

Filippi, who ended the final test session with the sixth-fastest time, said: “Oval driving is not easy at all. Like everything, you have to learn, and you have to be committed to learn to do it well. And that is how I am – totally positive about ovals.

“We have five ovals in IndyCar this year, and none of them are very similar to another. So there will be a lot to learn. I am still at the start of a long learning process, but we have limited time, so at a certain point I have to just go and make it up. But it’s looking good.”

Having come from a road racing background, Filippi might have been expected to prefer the IndyCars to have substantially less downforce on short ovals as, traditionally, 'European-style' racers like the grip limit to be progressive and for the car to offer more feel. However, Filippi admitted he was undecided on the topic.

“Honestly, it’s hard for me to say,” he shrugged. “I don’t have enough knowledge of the ovals to give you a good comment. All I can say that I like it as it is and I can also say it’s not easy. And for sure the race is not going to be easy.

“I will have two mentalities this year; just going to do my best on road and street tracks and then, on ovals, I will be learning the whole art of racing.”

Although Filippi has not yet been confirmed in Dale Coyne Racing’s #19 car, a deal is thought to be close. Filippi confirmed there will be “some Italian sponsors coming, but it’s not going to be a title. It’s more a group of smaller sponsors. I think you will see mainly [established DCR sponsors] Boy Scouts of America and Sonny’s BBQ on the car.”

IndyCars to qualify and race as tested at Phoenix