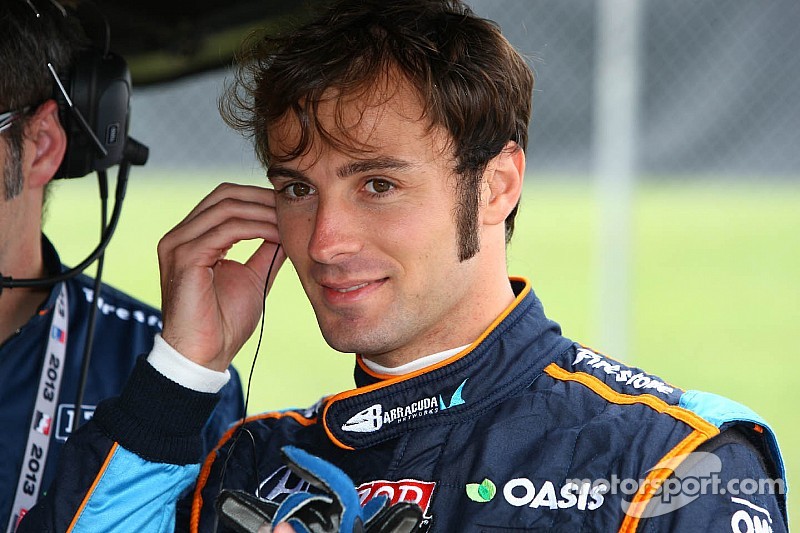 When Toyota Racing confirmed Mike Conway as one of its six drivers for two World Endurance Championship entries, the onus was on CFH Racing to make known their road/street racer for the 2015 Verizon IndyCar Series.

Team co-owner Ed Carpenter relinquished his ride in the No. 20 Fuzzy’s Dallara/Chevrolet/Firestone Indy car for the twisties last year, with Conway taking over and winning two races in the process. It was a good arrangement for both and Carpenter, who won in Texas last season, was hopeful it would continue into the coming campaign.

But Conway’s 2014 success in the World Endurance Championship as both test- and race-driver for Toyota Racing scotched those plans, leaving CFH Racing looking for someone who knew the DW12, could work with the team and didn’t have any conflicts during the short INDYCAR season. They tested quite a few drivers and decided the best fit was Italian Luca Filippi, who will also partner with full-season driver Josef Newgarden’s No. 67 racecar. Filippi, 29, will drive 11 of the 17 events on the current calendar.

Not the first time

This won’t be Luca Filippi’s first foray into Indy cars; he first competed with Bryan Herta Autosport in 2013 and worked with Rahal Letterman Lanigan for four races last year, with a best result of 10th in 2013’s first Houston doubleheader race. He’s raced on the two street venues where Conway took his brace of victories in 2014 - Long Beach and Toronto - lending credence to the choice.

Filippi, like many Europeans began his career in karts and worked his way through the maze of European formula cars. He was a Formula 1 test and reserve driver in 2005, 2007 and 2008 for a variety of teams and has second place finishes in the GP2 (Auto Nova, 2011), Auto GP for Super Nova (2011) and GP2 Asia championships, the latter secured with MalaysiaQi-Meritus.com in 2010.

“I am very excited to announce that Luca will be joining the team and driving the No. 20 Fuzzy’s Award Wining Vodka Chevrolet for the road and street courses in 2015,” said Carpenter, who co-owns CFH Racing with Sarah Fisher and Wink Hartman. “We have seen the potential that Luca has shown over the past two seasons in his limited races and we feel that he will allow us to continue to compete for wins. I cannot wait to get the season started so we can work towards our goal of claiming the entrants points championship.”

Sebring testing is not far off

Filippi and the CFH Racing team officially begin their pre-season testing together early next week, joining Newgarden at Sebring International Raceway. Additional testing takes place throughout the next two months, preparing for the season-opener on the streets of St. Petersburg, Florida on March 29.

“It’s a great feeling,” Filippi said of his new adventure. “I can’t wait to race and share the No. 20 with Ed this year. I look forward to the successes we will enjoy this season.” Newgarden, who will have a teammate - actually two - for the first time in his Indy car career finds the addition of Filippi “very exciting. He brings such a wealth of open wheel experience and talent.

“It’s critical to have a fast driver in the seat next to you that pushes you every weekend and you can learn from,” Newgarden continued. “He’s going to be a tough guy to beat and that’s exactly what we need to elevate our street and road course game.”

As did Conway, Filippi will be on-hand at the ovals where Carpenter has the wheel of the No. 20 Fuzzy’s Indy car. He’s looking forward to working with his car’s co-owner and with Newgarden. “Josef will be a very strong teammate to work with on the road and street courses. I’m looking forward to learning from him and watching Ed on the ovals as well. I’m really excited.”

More on the cancellation of IndyCar's season-opener

IndyCar strikes out in search for Brasilia replacement