Simon Pagenaud and Tristan Vautier head to 'Charm City' this weekend for the Grand Prix of Baltimore.

INDIANAPOLIS (Aug. 28, 2013) - Simon Pagenaud and Tristan Vautier head to 'Charm City' this weekend for the Grand Prix of Baltimore, and the teammates may need to rely on their natural French charm in addition to their driving skill to conquer the unforgiving street circuit that has gotten the better of even the most experienced IndyCar veterans. 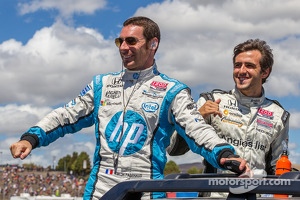 Baltimore was nicknamed 'Charm City' in 1975 by a group of advertising copywriters looking to improve the city's public image by highlighting its hidden gems. While Pagenaud and Vautier enjoy many of Baltimore's offerings, like crab cakes and the Inner Harbor views, they will have more of a challenge dealing with the 12-turn, 2.04-mile street circuit's unforgiving chicane and bumps.

"I enjoy street circuits in general, but Baltimore takes a lot of concentration and precision," Simon Pagenaud, driver of the No. 77 Schmidt Hamilton HP Motorsports Dallara/Honda/Firestone car said.

IZOD IndyCar Series rookie Tristan Vautier, who will be driving the No. 55 Schmidt Peterson / Environmental Rail Solutions Dallara/Honda/Firestone car at the Grand Prix of Baltimore, believes the difficulty lies in the variety of the track.

"This is one of the rare street circuits that mixes slow corners, very fast corners, smooth asphalt, bumpy concrete and even a rail road crossing!" Vautier said. "It takes so much focus to put a good lap together with all of those elements to overcome in Baltimore."

Neither driver was daunted by the course in 2012, however. Vautier led every lap and won the Indy Lights race en route to winning the championship, and Pagenaud recorded a strong third-place finish.

"Last year Schmidt Peterson Motorsports gave me a great car and we managed to control tire degradation pretty well which enabled me to win," Vautier said. "This year the bigger car is going to be sketchier over the bumps and move around more, so I expect to be much busier inside the car than last year!"

Pagenaud believes his HP team can be strong in Baltimore for a second year in a row, but in addition to winning the race his focus is also on the bigger championship picture. He currently sits fifth in the IZOD IndyCar Series Championship with 380 points.

"As the season gets closer to ending drivers get aggressive running for valuable points," Pagenaud said. "I expect that we'll see that escalate in Baltimore this weekend. At the end of the day we're running top-five in the championship, and we just need to win this race to move up."

The most recent IndyCar race at Sonoma Raceway featured flaring tempers and a record-setting seven caution periods as drivers fought for every available championship point. Tristan Vautier was involved in contact on nearly every re-start as cars vied for position around him.

"You always try to survive, but you also have to push and try to move forward every chance you get," Vautier said. "Staying out of trouble in Baltimore is going to be about making the right decisions at the right time and having things go our way that are out of our control."

Practice begins for the Grand Prix of Baltimore on Friday, Aug. 30. Tune in to NBC Sports Network to watch the qualifications broadcast at 6 p.m. ET on Saturday, Aug. 31. The Grand Prix of Baltimore will be broadcast live on NBC Sports Network Sunday, Sept. 1 at 2 p.m. ET. Follow @SPMIndyCar on Twitter for the latest team updates from the street circuit.

Ed Carpenter: Sonoma to Baltimore is a big contrast