Lisa Davidson’s take on the IndyCar race in on the historic Milwaukee Mile - the third oval of the season.

The Big Picture: The world’s oldest race track, opened in 1903, has been an open wheel Mecca since 1954. So, a person should show some respect. This place has enormous tradition so it’s very important that the Milwaukee Mile remain on the IZOD IndyCar schedule.

Event: It appears that Andretti Sports Marketing has done an excellent job of filling the stands and providing plenty of entertainment for its “Indyfest”. Is it worth the cost? You be the judge. The current contract with the track demands that there be no race at the legendary Road America, a premier world track. And, the tradition of scheduling is thrown out the window. As Paul Newman’s character said in the 1969 film “Winning”, “Everybody goes to Milwaukee after Indy”. Not anymore!

Qualifying: As exciting as single car qualifying ever is, which is to say, not at all. However, Marco Andretti ran at the front nearly every practice so his pole was “deserved”. 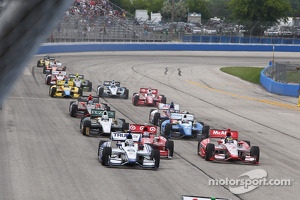 Race: I give it a 7 out of 10, which is pretty darned good for a short track oval race. There were plenty of changes for the lead and a good amount of passing behind the leaders. It wasn’t edge of your seat racing but it also wasn’t a snore-fest.

Track: For a 110 year old track it was pretty great.

Start: Not as orderly as I’d like, but far better than some of the abominations green flagged earlier in the season.

Surprise of the Race: Andretti slows…. Marco Andretti was clearly the class of the field all 2 days of the event, so it was a bummer that electrical problems removed him from contention before the race was half way over. Oh, and two Penskes were on the podium.

The Villain of the Piece: No one for this race!

Hunter-Reay: I don’t understand why Ryan isn’t on every Wheaties box and all over television with commercials. He’s an American racing champion, good looking, with a pretty wife and adorable baby. Maybe it’s because I’ve been covering his career so long? At any rate, Ryan did a great job of defending his championship and his 2012 Milwaukee title. He raced cleanly all day and won before a US crowd to celebrate his first Father’s Day ever! How awesome is that?

Castroneves: He’s almost the stealth championship leader who finished second at the Mile. Helio has raced up front all year, but has only won a single race. Because there have been so many different race winners this year, all those less than first but near the front finishes have made the veteran a strong contender for the championship. 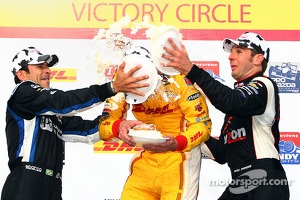 Power: For the past two years, Will has dominated road and street courses and missed winning the championship by a pair of false eyelashes and only because he didn’t do well on ovals. This year, that’s been turned upside down. He got his first podium of 2013, a third place, on the Milwaukee mile, an oval, and has zero road and street car podiums, let alone wins. So we are glad Will got his third.

TV Guys: It was good to have the NBC guys back as compared to having the ABC hosts and commentators. Will Buxton and Robin Miller did the track walk at the race, which the ABC people do not do. Also good to see was David Hobbs, who normally covers Formula One.

Next Race: IndyCar’s Midwest sweep takes us to the Iowa Corn 250, on Sunday, June 23rd. The ABC guys will be back. Who do I have to sleep with to get a consistent TV race schedule for IndyCar? My husband says it’s him but I don’t see any changes happening. Yet.

Dixon on the hot seat

Katherine got her ride in Monterey – It’s the DeltaWing!