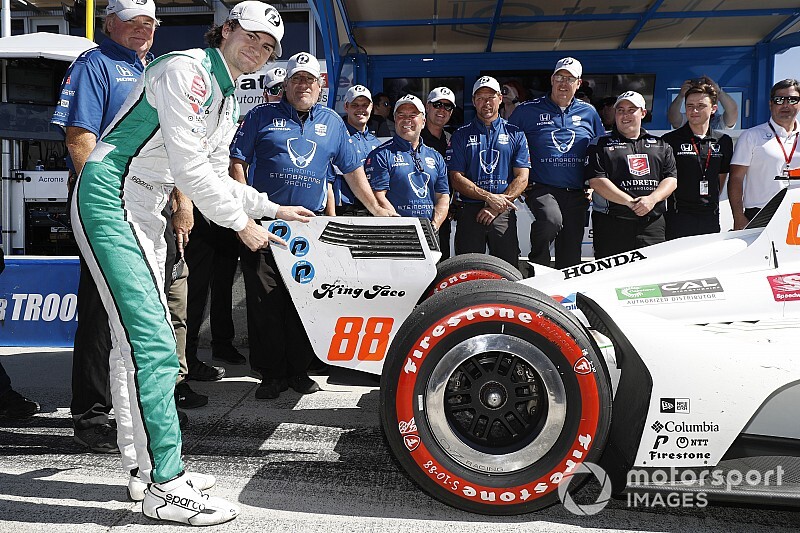 Colton Herta eclipsed the best efforts of the four NTT IndyCar Series contenders to score his third pole position of the season at Laguna Seca, as all four title contenders reached the Firestone Fast Six for the Firestone Grand Prix of Monterey.

Herta, who earlier this afternoon was confirmed for Andretti Autosport next year, lapped the 2.238-mile WeatherTech Raceway Laguna Seca in 1min10.141sec, beating Chip Ganassi Racing-Honda’s Scott Dixon by just 0.0426sec, to take his and Harding Steinbrenner Racing’s third pole of the season, and second in a row.

Alexander Rossi was only 0.0274sec further behind, and will start alongside Team Penske-Chevrolet’s points leader Josef Newgarden who blew his last effort with an off at Turn 2.

James Hinchcliffe did a fine job to get his Arrow Schmidt Peterson Motorsports-Honda through to Q3 and will start fifth, on the same row as Simon Pagenaud’s Penske, which also had a wild moment through the Corkscrew on his final shot.

Teammate Will Power got knocked out at the end of Q2 by last-gasp efforts from Rossi and Pagenaud, and will line up seventh, alongside Graham Rahal in the Rahal Letterman Lanigan Racing-Honda, while another driver expected to excel was Ryan Hunter-Reay who was fastest yesterday but will start only ninth.

Max Chilton excelled with 10th place in his Carlin Racing-Chevrolet, ahead of Marcus Ericsson in the second Arrow SPM-Honda and Santino Ferrucci’s Dale Coyne Racing-Honda.

One of the pole favorites, Felix Rosenqvist in the second Ganassi car, lost his two fastest laps and was not allowed to advance from Q1 Group 2 as punishment for qualifying interference.

He spun out of the uphill Turn 6, although he didn’t bring out a red flag and was able to restart without aid. His best lap would have put him top, and even his third best lap would have left him fourth and therefore advancing. Rosenqvist was disgusted and described the penalty as “unfair”.

Other disappointments within that group was RLLR’s Takuma Sato which failed by hundredths of a second to get through to the Top 12, while Marco Andretti who had looked strong in practice also failed to advance.

Conor Daly’s last-gasp effort left him just outside the Top six in Q1 Group 1, while Spencer Pigot was also disappointed not to get into the top half of the grid in the Ed Carpenter Racing-Chevrolet #21.