Kurt Busch, driver of the Furniture Row Racing Chevrolet in NASCAR, took the plunge at Indianapolis Motor Speedway when he climb into the cockpit of an IndyCar.

NASCAR's 2004 champion took laps at Indianapolis Motor Speedway this morning. That by itself isn't big news; but, arch intrigue lies in the fact that the test was in a rear-engine open-wheel machine--not a tin-top. And with one of IndyCar's top teams, and in the month of May.

Busch powered impressively around the Brickyard, logging a 218.2 mph mark in 83 laps en route to acing the Rookie Orientation program all drivers must complete before racing in the Indianapolis.

"One thing I noticed in the car is that you just have less time to look at things," he said. The IndyCar he drove in Thursday's test is capable of speeds 40-50 mph faster than the stock cars Busch usually drives. "Halfway through the day things started to slow down. You have to believe in the car and get a whole new comfort level. One thing is for sure, though: It was a treat that couldn't be equaled." 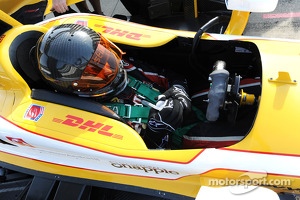 Could Kurt Busch be preparing to join Penske's NASCAR ex-pat AJ Allmendinger for a run at the Borg-Warner trophy on Memorial Day? Or possibly a Coca-Cola 600/Indy 500 marathon in 2014?

Busch down-played both scenarios, but didn't rule out either. “I wouldn’t call this an audition,” he said of the mid-morning session at The Speedway. “I think the most important part is to have fun first, and then let the business side take care of itself.”

Busch has previously tested in an IndyCar at the 1.9 mile road circuit at Sebring International Raceway, over ten years ago in February of 2003 as part of pre-season preparations for the Rahal Letterman Racing team. He has raced at Indianapolis 12 times in the NASCAR series.

"I was really looking forward to this test and experiencing IMS at the speeds the Indy cars run," Busch said. "Now I can look at the opportunities that could be out there. Running the Indianapolis 500 would certainly be a highlight of my racing career, and doing another 600 miles in a Cup car on the same day would make for a special weekend."

This isn't the first time top-flight drivers from other racing series have flipped seats at Indianapolis. Stock car and open-wheel stars Jeff Gordon, Tony Stewart, Juan Pablo Montoya and Lewis Hamilton have all "traded paint" on the legendary oval and its former Formula 1 infield circuit in recent years.

Nor is Busch the first driver to contemplate making an attempt at racing both the 500 and the 600 (held annually on Memorial Day evening in Concord, NC) the same day. John Andretti, Tony Stewart and Robbie Gordon have all tackled the mental and physical challenges of "doing the double" in recent years.

"I don't even know off-hand how the schedule works out to do it this year, or know if you can do it logistically," said Busch. "But there's faster planes and faster helicopters now than there used to be."

NASCAR stars have in the past discounted one-off runs at Indy, often citing a lack of competitive rides with the best racing teams as a factor. That's not the case for Busch. 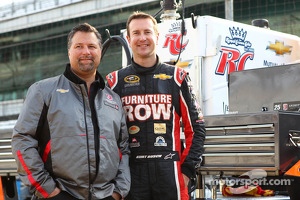 Busch flew in to Indy on Wednesday to cast a body-molded seat to fit reigning IndyCar Series champion Ryan Hunter-Reay's No. 1 Dallara DW12. The car is fielded by arguably IndyCar's hottest team right now, Andretti Motorsports. Team owner Michael Andretti was on hand to monitor the proceedings on Thursday at the track, accompanied by driver James Hinchcliffe fresh from his win at the Sao Paulo IndyCar 300 on Sunday.

Andretti was non-committal on a Busch entry to this year's Greatest Spectacle in Racing, but like Busch, he refused to rule it out. "Let's see what happens," Andretti said. "That'd be cool if he was racing one of our cars. That'd be really cool."

Busch did his homework, reportedly contacting former IndyCar and Indianapolis 500 champ Sam Hornish, Jr for pointers on how to drive al fresco at the 2.5 mile Brickyard.

"Nothing can really prepare you for going into Turn 1 at Indianapolis wide open," said Busch. Hornish pointed out that the technical qualities of the open-wheel machine offer up awesome cornering and straight-line speed, and told Busch to let the car take him around the track in excess of 220 miles per hour.

"You have to lift off the throttle at Turn1 in a big, heavy stock car," admitted Busch. "What I learned today is there’s a speed side of it and then an experience aspect of learning how to trust the car to do things that ought not to be possible.”

Busch last navigated the big oval only a week ago, in his Furniture Row NASCAR Cup car, as part of two day-long sessions testing at the Speedway for Goodyear tires.

"It was a dream come true" - Kurt Busch