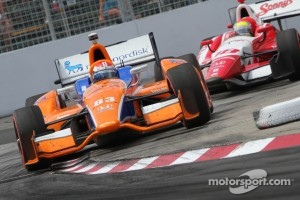 Starting 13th, Kimball gained two positions in the opening laps, and was up to eighth place on Lap 30. Fifteen laps later he had climbed to sixth. After the final round of pit stops on Lap 55 became embroiled in the battle of the race, fighting for what was then third place with fellow Honda-powered drivers Simon Pagenaud, Justin Wilson and Josef Newgarden, along with Team Penske’s Ryan Briscoe.

A brush with the wall sent Wilson to the pits on Lap 67, and five laps later Kimball was able to successfully pass both Pagenaud and Tony Kanaan in a single move at the end of the Lakeshore Blvd. straight to jump from fourth to second, where he finished behind race winner Ryan Hunter-Reay. Now in his second season of IndyCar competition, the second-place finish is the best of Kimball’s career, following a trio of eighth-place runs earlier this season.

Conway’s race played out in a similarly dramatic fashion. Running 11th with 15 laps remaining, he took advantage of a strong-running Honda Dallara package in the closing laps to capitalize on passing opportunities and the mistakes of others to move to fifth by Lap 80, and then third on the final race restart on Lap 82, when multiple incidents at Turns 1 and 3 resulted in the race ending under caution.

Wilson started third and ran at the front until a brush with the wall ended his day. Pagenaud led 23 laps mid-race, but later made contact with Newgarden as the pair battled for position, resulting in Newgarden making minor wall contact and a penalty for Pagenaud.

Panther Racing bounces back in Toronto