Kimball: Pocono race will be about balance, not power 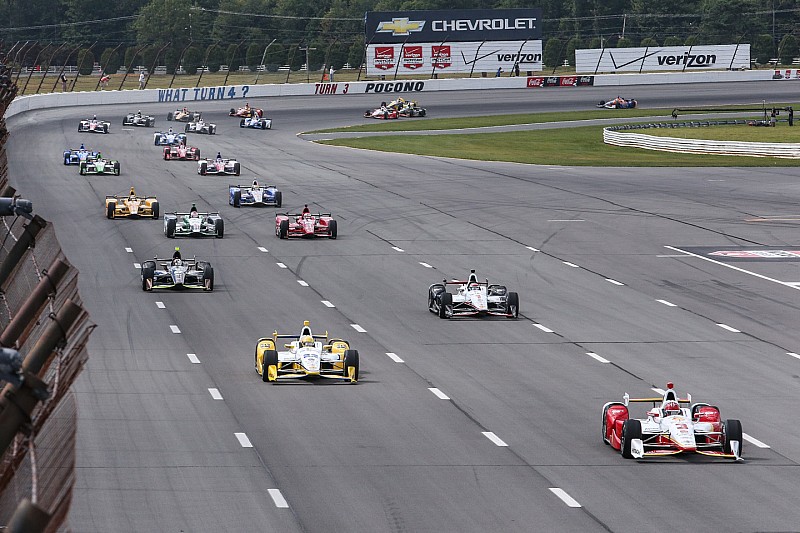 Charlie Kimball is expecting that this year’s ABC Supply 500 at Pocono Raceway will put greater importance on the handling of the car, largely thanks to the addition of the domed skids on superspeedways.

The Chip Ganassi Racing-Chevrolet driver, who completed over 100 laps of Pocono’s tri-oval in testing today, told Motorsport.com: “My impression from watching times today was that the engines were less of a factor than aero balance. Early in the afternoon, the wind picked up and the track got greasy and the cars were a handful.

“If you were good in those conditions then when it cooled off you just got quicker and quicker. So if you didn’t get your setup right, if you didn’t have good balance in the car, that was what determined lap speeds, rather than it being a manufacturer battle between Chevrolet and Honda.”

Kimball, said that the domed skid plates, which are a safety measure to severely slow a spinning car on the superspeedways, were having a greater effect on handling at Pocono than at Indianapolis Motor Speedway, where they were introduced this past May.

He said: “I think domed skids makes a bigger difference at Pocono because there are a couple of bumps in corners that are a little more impactful here. We definitely had to work with the car a little bit – it didn’t roll off the truck great. But I feel we were able to make mechanical grip improvements.

“It’s hard to say because the aerodynamics are so different. But by the end of the day, I think we had something where the car felt as strong as it had last year [without the domed skids].

“Speed-wise, we didn’t do a whole lot of looking at last year’s data. But this year I think you may not see people trimming out quite so aggressively, especially in qualifying, because it is harder to get that mechanical balance. When you’re trying to trim off the drag and compensate for that with mechanical grip, I’d say the window for getting it right is narrower this year with the domed skid than it was last year.”

Kimball, who scored the second podium finish of his IndyCar career when the series returned to the so-called ‘Tricky Triangle’ in 2013, said that the progress made over the course of the morning was slow due to the rubber left by the NASCAR cars.

He said: “Because the NASCAR boys ran as late as Monday [due to the Sunday rain-out], their rubber this morning was still pretty thick and they run a fairly different line around here. It took a while to get our Firestone rubber over the Goodyear rubber and it was almost worse than a green track. We’d go from off the NASCAR line, then onto it and then off it again, so you had these grip changes. A lot of inconsistency.

“But we were able to build up speed eventually and by the end of the day I was fairly happy with the car. At Ganassi, we did some aero work based on simulations, but didn’t do a whole lot of work in traffic. We spent a lot of the day just making the car better mechanically and then evaluating aero changes so that when we go back in two weeks, we’ll know which direction we’re going for qualifying and which direction we’re going for the race.”

Kimball suggested that the quality of the racing will again depend on how many yellow-flag laps they get over the course of the 500-mile race. Both 2013 and ’14 Pocono races turned into fuel mileage-dominated events, the latter being particularly dull for the first two-thirds of the race as the drivers cruised around some 8mph off their potential lap times. The result was fewer mistakes because the cars weren’t at their limit, and only one caution period.

In stark and ultimately tragic contrast, last year’s race saw several shunts – 12 cautions amounting to 74 of the 200 laps. And with each yellow, the drivers had more fuel to ‘go for it’. Sage Karam’s hard impact with the wall while leading created the debris that cost the life of Justin Wilson.

Said Kimball: “It’s hard to say how any race will develop. I can’t tell you how many times I’ve gone into a race and thought, “Oh, there’s going to be chaos today,” and it’s absolutely clean all day. And yet last year I thought Pocono was going to be one of the cleaner races, and yellows kept breeding yellows.

“Part of that, I think, was because people had spent two years here stuck behind people, saving fuel and not challenging. But as a result last year on restarts they pushed their limits, got overly aggressive and like I say, as a result yellows bred yellows.

“If the fuel considerations are lessened by a yellow or something, especially in the final stints, I think this year you’ll see really good racing because I don’t think you’ll be able to keep people behind you. But honestly you can’t tell beforehand.”

Carlin aims for IndyCar “when we can do it right”

Rossi positive about progress and about IndyCar