Kimball: “A lot of people will be impressed by Carlin in IndyCar” 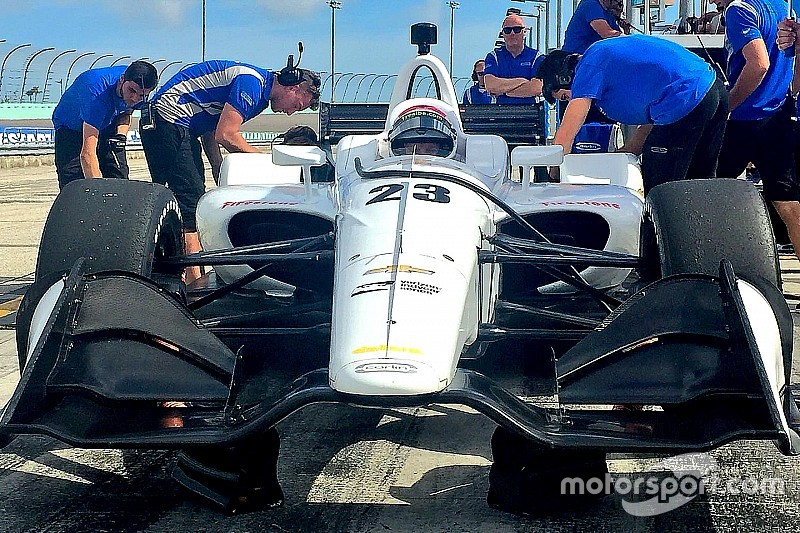 Charlie Kimball says he’s expecting Carlin Racing to cause a stir in its first season in the Verizon IndyCar Series.

Carlin is entering IndyCar this season with a two-car squad for Kimball and Max Chilton, each of whom have arrived from Chip Ganassi Racing, as the latter downsized from four cars to two for 2018.

Following the team’s first two days of testing at Homestead road course, Kimball said he thinks Trevor Carlin’s team can perform at a level that will startle some fans and rivals.

“I think a lot of people will be impressed and surprised at the level that Carlin brings to the IndyCar paddock,” Kimball told MotorsportTV. “That’ll be the biggest shock to a lot of teams and probably a lot of fans.

“To them it’s this new start-up team when in fact it’s a successful, established tradition of a race team – just in a new formula.

“The biggest challenge for both myself and for Carlin as we get ready for the start of the year is how little time there is. There’s very little track time, very few calendar days to work through all of the many, many details – some of them very small but very important to the on-track result…

“But I have every confidence that the team is up to that challenge – myself as well. None of us is afraid of hard work or long hours; we just need to make sure that we check every box possible and do as much learning before we get to the first race so we can perform as best as possible.”

Kimball drove the car for half a day on Monday and the full day on Tuesday at Homestead, while Chilton took over for Sebring testing today and tomorrow. The American said he hoped that his seven years at Ganassi would speed up the team’s learning process, but also saw this year as a chance to modify his own methods.

“[The] change of landscape is really good,” said Kimball. “I will be able to reevaluate a lot of what I do as a driver, how I work with the team, what the team needs from me, how I’m able to contribute.

Kimball, who finished second in the 2005 British Formula 3 championship while driving for Carlin described his return to the squad as “like coming home.

“Having raced with them in 2005 and 2007, I know a lot of the people here. My race engineer Matt [Greasley] was on the same World Series team as I was in 2007 so we’ve been around each other for over 10 years, off an on, at different racetracks around the world.

“So that’s been pretty easy to assimilate, get back up to speed, start working with them and start building a foundation for when we get to the racetrack.”

Conditions at Sebring “too good to learn much” says Rossi