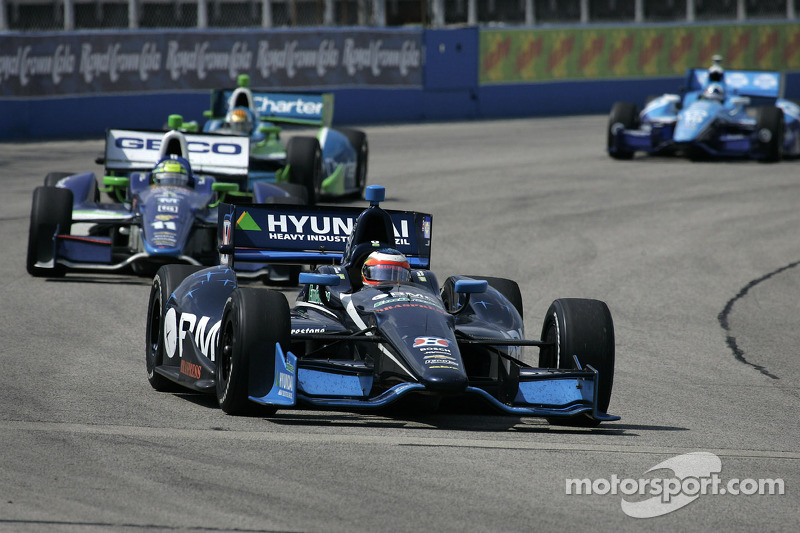 KV Racing Technology driver Tony Kanaan recorded his second consecutive podium finish with a third place performance last night in the Iowa Corn Indy 250 at Iowa Speedway in Newton, Iowa. Teammate Rubens Barrichello finished seventh while E. J. Viso, the third of the KVRT trio, was having an outstanding race when he became the victim of an on-track incident.

Kanaan, in the No. 11 GEICO | MOUSER ELECTRONICS – KV Racing Technology Chevrolet/Firestone machine, qualified ninth, but due to a 10 position penalty because of an unauthorized engine change, started 19th. Kanaan picked up two places before the race ever went green when Alex Tagliani spun off on the opening lap under yellow and Dario Franchitti’s Honda engine failed on the second lap, also under yellow.

When the green flag finally fell, on lap 10, Kanaan, demonstrating the skill and determination that are his trademark, immediately began to move through the field. By lap 34 he was in the top-10 and in the top-five by lap 88. Following his final stop on lap 182, Kanaan engaged in fierce seesaw battles with first Ryan Hunter-Reay, then Helio Castroneves and finally Simon Pagenaud for a spot in the top-three. On lap 244, Kanaan got by Scott Dixon, who had fallen from first place and then on lap 246 he passed Pagenaud for good taking position of third. One lap later the final yellow flag of the race came out ending any hope of a victory.

“It was a great day for us,” Kanaan said. “I wished we had started further up the field, but the GEICO | MOUSER guys gave me a great car. We don’t take the podium finish for granted, but I think we had a car that could have won the race. There were lots of dodgy moves out there. People were driving kind of crazy. I hope the fans liked the race. Now we have to capitalize on what we have done so far, the championship is getting tight. Hopefully we can get a win soon.”

Kanaan, who finished a season-high second last week in Milwaukee, had his second straight podium performance and earned his third top-three finish of the year (finished third in the Indy 500). The 37-year-old Brazilian has collected five top-six showings in the first nine races of the 2012 season with his best performances coming on ovals, a second and two thirds (was also running in third at Texas when he was hit by Will Power and dropped to 11th). Kanaan, who has finished eight of the first nine races this year (DNF at St. Petersburg due to a non-team related component failure), also has a fourth and sixth on the street circuits in Long Beach and Detroit respectively.

Last night’s third place finish in Iowa is Kanaan’s third podium in six starts on the .875-mile short oval and includes a win in 2010 (the 15th and most recent of his 15-year career) and a second last year. The perennial championship contender earned 35 points and moved into seventh place in the championship race with 235 points, just 51 points out of first place. Tonight’s performance places Kanaan in a tie for the lead in the A. J. Foyt Oval Championship with Ryan Hunter-Reay both with 136 points. However, Hunter-Reay holds the tiebreaker with two wins. The championship will be determined at Fontana, the final oval race on the 2012 schedule, unless there is an oval replacement race for China.

Barrichello in the No. 8 BMC | EMBRASE – KV Racing Technology Chevrolet/Firestone entry, qualified 13th, but started 11th after penalties were assessed to other drivers. He gained the two spots in the opening two laps putting him in ninth place and from that point on drove a solid, consistent race avoiding the mistakes that some of the more experienced oval drivers fell victim to. Barrichello, who made his debut on the challenging Iowa short oval, ran in or near the top-10 the entire race dropping as low as 14th only during pit stops. He gained confidence throughout the course of the race and following his last pit stop on lap 182 he rejoined the race in ninth position. He moved into eighth place when James Hinchcliffe crashed and then made a pass late in the race to move into seventh.

“I must say I am happy with this seventh place finish,” Barrichello said. “I started the race on a completely different set up and for two stints my car was pretty loose. We managed not to lose a lap and once the car got better after the changes we made in the first two pit stops I was able to race. It's still such a different experience on ovals, but like I said, I am pleased with the result.”

Barrichello made his third career oval start (he did not start in Texas because of a non-team related component failure) last night. The 40-year-old Brazilian and Formula One veteran, who had never turned a wheel on an oval prior to this year, has adapted quickly to oval racing in his rookie IndyCar season. In his three starts he has tonight’s seventh place finish, his first top-10 oval performance placing 10th last weekend in Milwaukee and finished 11th, earning the Chase Rookie of the Year Award, at Indy. Barrichello, who has finished seven of the nine races this year (both his DNFs, Detroit and Texas, came as a result of non-team related component failures), has five top-10 performances, the seventh tonight, the 10th on the oval at Milwaukee, an eighth on the permanent road course at Barber Motor Sports Park and a ninth and 10th respectively on streets circuits at Long Beach and Brazil. He earned 26 points tonight and currently sits15th in the championship standings with 164 points, just 29 points out of 10th.

Viso, driving the No. 5 CITGO | PDVSA – KV Racing Technology Chevrolet/Firestone car, qualified 16th, but started 24th after receiving a penalty for an unauthorized engine change. He picked up the two positions during the opening yellow flag laps and, like Kanaan, was on the move with the drop of the green flag setting up and passing other competitors almost at will. By lap 60, Viso was in eighth place and clearly had a car that could win the race. Unfortunately, while working lap 68 he got a run on Will Power and moved low to make the pass. Power, who later admitted that he did not see Viso moved down forcing Viso below the yellow line and onto the apron of the track. As Power kept coming, the two made contact ending both of their races.

Commenting on the incident, Viso said, “Will (Power) was off the pace. I got a run on him going in to the first corner and he just blocked me. I couldn’t go any lower, I had my front left tire on the apron , under the yellow line, and he just kept coming down on me and I had nowhere to go. It is very disappointing. The CITGO | PDVSA – KV Racing crew gave me a great car. I believe this race was ours. It is just a shame.

Viso, who made his fifth appearance at Iowa, has a best finish of third, his IndyCar career-high in 2010. The 27-year-old Venezuelan, who has been solid in qualifying this year, has also showed patience and solid race craft this season. He has finished seven of the nine races and neither of his DNF’s were his, or the team’s fault. At Texas, he was running in the top-six when he suffered a non-team related component failure and the incident tonight with Power was clearly not his fault.

Viso has scored three top10 finishes so far this season including a season-high fifth last weekend at Milwaukee, an eighth at St. Petersburg and a ninth place performance in Brazil. However, he has been in contention for top-five finishes in several other races most notably Detroit, where he was running in eighth late in the race when he was hit from behind and at Texas. Viso earned 12 points tonight and is 17th in the standings with 160 points, just 33 points out of 10th place.

Penske Racing suffers a pair of retirements at Iowa