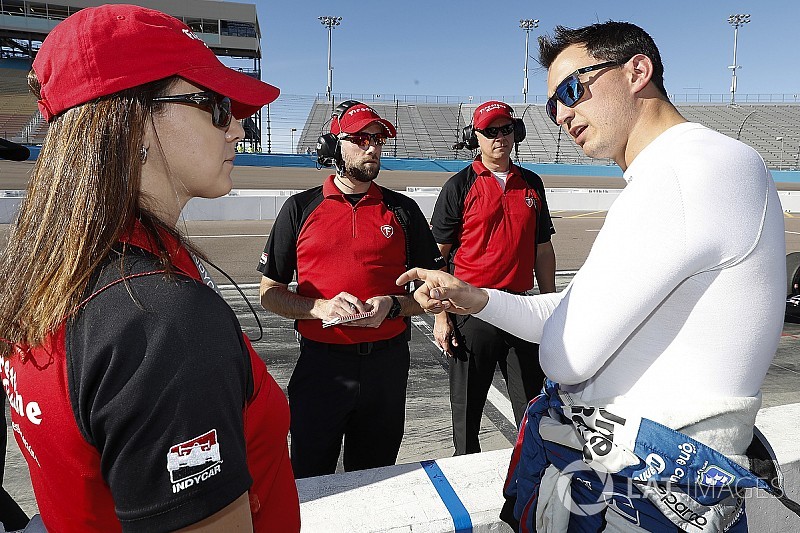 Next week’s Firestone test day for Graham Rahal and Tony Kanaan at Sebring will be to evaluate potential new street course tires that may be introduced to the IndyCar series as soon as the Toronto race in mid-July.

Based on feedback from drivers over the past several seasons, Firestone has long sought to increase the gap in durability between its primary tires, and the softer red-sidewalled alternates that offer more grip but have a higher rate of degradation.

Now the company has committed to testing four different street course compounds with Kanaan (AJ Foyt Racing-Chevrolet) and Graham Rahal (Rahal Letterman Lanigan Racing-Honda) at Sebring on Feb. 26, as the new aerokit is expected to induce a higher rate of degradation in general. The heavy reduction in downforce means there is less lateral load being put through the tires but the cars are more conducive to ‘skating’ across the track surface, causing a greater wear rate.

Cara Adams, Firestone’s chief engineer and manager of race tire development, told Motorsport.com: “We’re testing four different street course compounds to try a few different things. One is to try and limit the amount of drop-off on the primaries for tracks like Detroit and Toronto, tracks where there are different surfaces. You have a lot of concrete in addition to the asphalt.

“So we’re looking to see if we can find a primary tire that is more endurable over an entire stint and testing various compounds. Some may be in the range of what a primary would be and some may be a little softer, could be used as either a primary or an alternate, depending on what we see from the test results.”

While Firestone intends to introduce a new rain-tire at the Dual in Detroit double-header, June 1-3, the new street course tire would not come on line until mid-July – if then.

“The earliest we might use them is in Toronto,” said Adams, “but it depends on what feedback we get from the very first race of the year regarding current tires. The introduction may wait until 2019.

“We’d like to see how the current tires run in the first and second street course races of the season – St. Petersburg and Long Beach. Based on our own data and feedback from those two events, along with what we learn at Sebring next week, we can then decide what we introduce and when.”

There are only five street-course races (four venues) on the 17-race IndyCar calendar in 2018, with Toronto being the last of these. Nonetheless, Firestone is ensuring no advantage would be conferred to the Rahal or Foyt teams by its drivers being the first to experience the new rubber.

“We always try to share the amount of testing we do and limit the amount of times we use any one team in a season,” said Adams. “In fact, that’s written into the rulebook that we can only test with a single team twice. So what you might see is that someone who tests at Texas Motor Speedway for us will be someone who hasn’t got to test for us at Sebring, and we might have someone different again to test at Iowa Speedway.

“If it’s something like an alternate compound, we won’t tell the teams that tested it for us which specific compound we’ve gone for. So they’ll have tried several and won’t know any sooner than the other teams which one of them we chose to put into production.”

New IndyCar team Carlin Racing will share the Sebring track with Firestone on Feb. 26, with several other cars joining over 27-28.