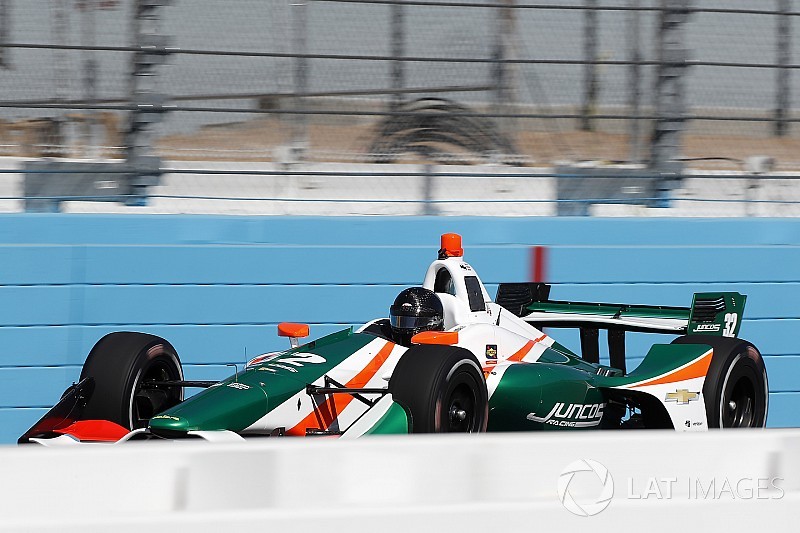 Following the rookie oval test, and one day of action in the Open Test, team owner Ricardo Juncos has hailed a “fantastic” first IndyCar performance by Kyle Kaiser and the team at Phoenix’s ISM Raceway.

The team's and driver’s previous experience at Phoenix had been in Indy Lights two years ago when they took pole, fastest lap and victory. On his first IndyCar run at the venue last week Kaiser completed 114 laps in his rookie test, then 62 in the Friday afternoon session, and 78 that evening.

The team elected not to run on Saturday, in order to preserve a test day, which may yet be used by the team’s other driver, Rene Binder. The two rookies will share the part-time #32 Juncos Racing-Chevrolet entry, with Binder racing at St. Petersburg, Barber Motorsports Park, Toronto and Mid-Ohio, and Kaiser taking the wheel at Phoenix, Long Beach, the Indianapolis GP and the Indy 500.

Kaiser, the reigning Indy Lights champion, said: “We had a list of objectives and goals and checked a lot of boxes off that list. We gathered a lot of data to go over so when we come back in April we’ll be ready.

“It’s a steep learning curve for the team and myself, but if we keep focusing on our program and making consistent progress, I’m confident we’ll be competitive come race day.

“I’m also very grateful to all the guys on the team for making this test possible. I know they have been working very hard to get the car ready to run with no issues.”

Juncos Racing, has powered three Indy Lights and three Pro Mazda drivers to the championship – and won both titles in 2017 thanks to Kaiser and Victor Franzoni respectively. The squad made its IndyCar debut in the Indy 500 last year as a one-off with two cars, and this year has committed to eight races for one car.

“I am so happy to be back in the Verizon IndyCar Series for the 2018 season,” he said. “It was a challenge for us to get everything ready on time, building with the new Dallara aerokit and electronics, and building pretty much a new team!

“The test at Phoenix went fantastic for us, we did what we wanted to do. The strength of the Chevy engine is amazing and I am thrilled to be partnered with them for 2018. We are very pleased with Kyle’s results and how he handled the test after not being in a racecar since the last race of the 2017 Indy Lights season.

“He exceeded our expectations and I am confident he will be ready for his first race when we return here to Phoenix in April. I cannot thank the crew enough for all their hard work this past month. This was our first chance to be together entirely as a team.

“We still have a long way to go, but by staying focused and meeting our goals I know we can achieve a lot this year.”