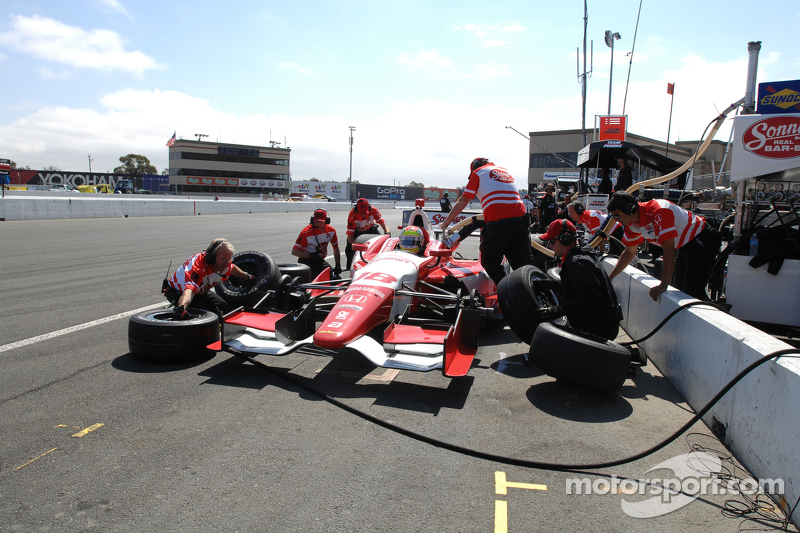 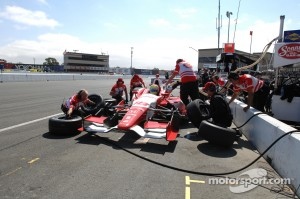 Justin and Dale Coyne Racing put in a strong performance in the Indy Grand Prix of Sonoma to finish 11th in the #18 Sonny’s Bar-B-Q Honda, making up almost all of the ground lost through a 10-spot grid penalty for an unapproved engine change. Starting from 20th, and with overtaking notoriously difficult at the North California track, Justin made several passes for position and benefited from attrition elsewhere in the field to salvage a decent points haul. Ryan Briscoe led home a Team Penske 1-2 from team-mate Will Power, with Dario Franchitti (Chip Ganassi Racing) rounding out the podium. James Jakes finished 12th in Dale Coyne Racing’s #19 Boy Scouts of America Honda.

Justin gained several positions at the start, but then lost them when he was forced wide into Turn 7, but by Lap 3 he was back up to 20th and made up one further position over his first two stints (Lap 1 to 16 and Lap 17 to 38), both of which were on the harder Firestone tyre. From half-distance onwards Justin’s race came to life, helped by a new set of the softer, red-sidewalled tyres during his third stint. On Lap 47 he passed EJ Viso for 16th and on Lap 58 he took Mike Conway (AJ Foyt Racing) to move up to 13th, before pitting for the third and final time on Lap 61 for scrubbed reds, emerging in 14th.

Having stayed comfortably on the lead lap throughout, Justin suddenly found himself a lap down on Lap 64 after the race’s first yellow caution flew. The two cars in front of him lifted unnecessarily, allowing the race leader to exit the pits in front of them, ruining their own prospects and Justin’s in the process. With only the first 9 cars on the lead lap in the closing stages, Justin and Tony Kanaan (KV Racing) were left to fight over a best possible finish of 10th, but the #18 car didn’t have the grip needed to complete the move and Justin was forced to settle for 11th at the chequered flag.

“Overall it was a good day for the No. 18 Sonny’s Bar-B-Q Honda,” said Justin. “I’m very happy with 11th place after having to start from 20th. The track was very slick today and the car was sliding all over the track, but everyone else had to deal with it as well. I got a great start and passed lots of cars, but got hung out at Turn 7 and lost about 8 positions so had to start all over again. The caution helped us at the end of the race on fuel mileage, but we got behind a couple of cars that slowed down when the first yellow came out just as the leader was coming out of the pits, which put us a lap down. If that hadn’t happened we would have had a top 10 finish today.”

Chevrolet Racing has a banner weekend at Sonoma