This is the first time Ivy Tech has partnered with a race team or been on the car of an Indianapolis 500 driver.

INDIANAPOLIS -- Ivy Tech Community College is partnering with Chip Ganassi Racing Teams (CGRT) and their rookie Indianapolis 500 driver, Sage Karam. Karam will be driving the No. 22 Brantley Gilbert/Comfort Revolution Chevrolet of Dreyer & Reinbold Kingdom Racing that will carry Ivy Tech branding for the 98th running of the Greatest Spectacle in Racing, on Sunday, May 25, 2014.

“We’re excited about this new opportunity to bring Ivy Tech to the Indianapolis 500,” said Ivy Tech President Thomas J. Snyder. “In addition to making his Indy 500 debut, Sage is also a high school student, making him the perfect driver to represent Indiana’s top college choice for high school graduates. The Indy 500 is the largest single-day sporting event, and as the largest college in Indiana, we’re thrilled to be a part of the greatest spectacle in racing.” 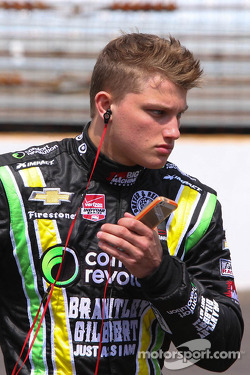 This is the first time Ivy Tech has partnered with a race team or been on the car of an Indianapolis 500 driver. Before the race, Karam will visit Ivy Tech’s Central Indiana campus, meet with students, and tour the Automotive Technology Center, which houses a Technical Certificate program in Motorsports to prepare students for careers in the racing industry.

“Having great partners is always important to having great success on the race track and I am very happy about our partnership with Ivy Tech,” said Sage Karam. “The fact that I am just graduating from high school this spring makes the partnership all the more important to me as continuing my education will certainly be a priority. I think this partnership can help me both on and off the track.”

Karam is a 19 year-old driver from Nazareth, PA, and the youngest qualifier in the 33-car 2014 Indianapolis 500 starting field. He started all 12 races of the 2013 Indy Lights series, winning three times on his way to claiming the 2013 Indy Lights Championship, making him the youngest Indy Lights Champion in history at 18 years old. He signed with CGRT last month as a development driver but will be racing in the 2014 Indianapolis 500 through an alliance with Dreyer & Reinbold Kingdom Racing.

Ivy Tech Community College is the state's largest public postsecondary institution and the nation's largest singly accredited statewide community college system serving nearly 200,000 students annually. Ivy Tech has campuses throughout Indiana. It serves as the state's engine of workforce development, offering affordable degree programs and training that are aligned with the needs of its community along with courses and programs that transfer to other colleges and universities in Indiana. It is accredited by the Higher Learning Commission and a member of the North Central Association.

DeltaWing goes where it has never gone before: A street course