The 88th Indianapolis 500 Mile Race began with rain and ended the same way, after 180 of the scheduled 200 laps at the 2.5- mile Indianapolis Motor Speedway. At the end of the day it was raining Rice, as polesitter Buddy Rice won in a wacky race, ...

The 88th Indianapolis 500 Mile Race began with rain and ended the same way, after 180 of the scheduled 200 laps at the 2.5- mile Indianapolis Motor Speedway. At the end of the day it was raining Rice, as polesitter Buddy Rice won in a wacky race, fraught with stoppages for wet weather, plenty of contact and lots of lap leaders. 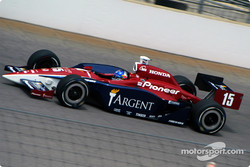 Buddy Rice.
Photo by Earl Ma.
At the end it came down to Rice, who stalled his #15 Argent Mortgage/Pioneer Panoz G Force/Honda when he pitted on lap 97, falling back to eighth place in the process. He put the bit between his teeth and worked his way back to the front, becoming the first American driver since his former team owner Eddie Cheever in 1998 to win the Greatest Spectacle in Racing.

"I have to thank the guys up here, Bobby [Rahal], Dave [Letterman] and Scott Roembke (team manager). Filling in for Kenny [Brack] hasn't been the greatest situation, but we've talked a lot since Phoenix and he helped me and my teammates this month," Rice revealed. Rice knew "traffic would be a problem today, but Scott and Todd [Bowland, his engineer] made all the right calls."

Rice stayed out longer than his pursuers before making his final stop for methanol and four Firestone Indy tires "and I knew fuel strategy and pit stops would be crucial. The pack was tight, top to bottom but I knew Tony [Kanaan] would be at least a lap down after his stop," which he was. "These guys had it all worked out."

Kanaan said the obvious: "It was a long day for everybody." For him it was "a fun race. I never had so much fun in my life with a teammate that I had with Dan today. Winning races is important and winning championships, too, but the relationship on the track when you can fight that hard between each other and still get out of the car and be able to laugh about it that, for me is priceless." Kanaan led 28 laps in three times pacing the field.

That comment flummoxed Wheldon for a bit but he recovered to note, "I had probably my most enjoyable race ever from a driving standpoint. I think we did an absolutely fantastic job, with three of the top four. That speaks volumes of Andretti Green Racing. I'm very happy." Wheldon led 26 laps on three occasions and they diced the whole race long.

Wheldon has proper respect for the Indy 500 in his second try for the wind. "The Indianapolis 500 is the best race in the world. People respect and race one another real hard around this track."

Herta only led only three laps and called his result "great for our team. The right guy won today. Buddy Rice had the fastest car and he won the race. That's the way the Indy 500 is supposed to be." Herta made his way forward pretty quickly. After the red flag he'd never go any lower than sixth place (twice) and that was on pit stop exchanges.

Bruno Junqueira rode the roller coaster all day long, starting the #36 PacifiCare Panoz G Force/Honda in fourth place and, for the most part running in the double-digit end of the field, never lower than 19th though. Lacking practice time of the other teams on-site all month, his Newman/Haas team didn't have the chance to pace him through different situations. Perhaps that is why "we didn't have the best car in traffic. We were good by ourselves and on a different strategy from the leaders." He did lead once for 16 laps.

Rice's teammate Vitor Meira, too, was up and down the lap charts in his #17 Team CENTRIX Panoz G Force/Honda, ending up one spot better than his start in sixth. A penalty for running over a hose put the competitive Brazilian far to the back by lap 80 but he persevered. "We made 27 positions from Lap 100 to the end of the race."

Adrian Fernandez had been extremely quick in practice with the #5 Quaker State/Telmex Panoz G Force/Honda. His nine years away from the Speedway seemed to melt away and he finished seventh, leading once for three laps on pit stop exchanges.

"It was a good day for everybody and I am very proud of the guys. We just seemed to not have the breaks, but I think the biggest bad break was when Helio (Castroneves, who took ninth for the #3 Marlboro Team Penske Dallara/Toyota) overshot his pit and I really had no space to come into my pit."

First in the Toyota class went to Scott Dixon's #1 Target Panoz G Force for eighth. His frustration was palpable; it's been building. "We did the best we could with the car we had and tried to battle with the guys out front and was in fifth place 20 laps from the end. "We might have been able to finish a little better if the race had gone full distance but Buddy deserves the win. He was strong all day and battled hard."

Castroneves paid for his faux pas in the pits with ninth for the afternoon with ninth place and he knew it: "We had a solid car today and could have finished in the top three." His wasn't the only Penske problem. A problem with a hose coupling dropped Sam Hornish Jr.'s #6 Marlboro Team Penske Dallara/Toyota out of third from when he first pitted to mid-pack after two added stops.

Roger Yasukawa completed a trifecta for Rahal Letterman Racing as the sophomore IndyCar Series driver coaxed his #16 Sammy Panoz G Force/Honda to tenth. Yasukawa called it "a long race for me." Losing a few spaces before the red for rain, he also suffered from a couple of cut Firestones. "I kept going backward but then I kept working myself back up. It was a great team effort."

Alex Barron was best in the Chevy camp with 12th in the #51 Red Bull Cheever Dallara. Starting 24th after "an up and down month, my car was good all day today." His biggest problem was re-starts and there were a lot of those with eight yellows for 56 laps. "I just didn't have the timing down, but when we were running, we had no problem overtaking."

Scott Sharp's #8 Delphi Dallara/Toyota in 13th and Dario Franchitti, who started third in the #27 Arca/Ex Dallara/Honda for Andretti Green in 14th were the final cars on the lead lap. Their days resembled a pendulum as one came forward - Sharp from 20th - and the other went back. Before the rain delay Franchitti had some gearing problems. Afterwards, they went a bit too far on an adjustment. "We just kept going backward all day and it was pretty frustrating."

Felipe Giaffone was a lap down in the #24 Purex/Aventis Dallara/Chevrolet 15th, up from 25th and a higher finish had to be blamed on his missing the marks during his next-to-last pit stop. Otherwise, "We had a better pace in traffic and the car was OK toward the end." Rookie Jeff Simmons drove his first IndyCar Series race in Mo Nunn's #21 Pioneer Dallara/Toyota from 29th to 16th, an excellent result for a complete first-timer.

Al Unser Jr. and his new Patrick Racing #20 Dallara/Chevy had a tough day for Indy sponsor Subway. Tomas Scheckter looked on the pace to make a charge, at one point passing 4-5 cars around lap 135 or so then fading to18th, the final car one lap down after starting 10th. Tora Takagi took 19th in his #12 Pioneer Dallara/Toyota, Richie Hearn soldiered to 20th from 30th, Sarah Fisher fought her #39 Bryant Heating & Cooling/TrimSpa Dallara/Toyota into 21st and Robby McGehee, who started last in the #18 Burger King Dallara/Chevy from PDM Racing was the final car still running in 22nd, three laps down.

Twenty-two drivers finished this endurance race, which began just after 1PM EST and finished - albeit with a two-hour stoppage - well after 6PM. There were seven caution flags, the final one being the yellow that preceded Rice's trot to the checkered flags.

The first yellow came on lap 11 for A.J. Foyt IV who spun his #14 Conseco Dallara/Toyota in Turn 1 after brushing the Turn 4 wall en route. He tried to get back on the track after the red flag for rain that stopped the race on lap 27 for more than two hours, but was unsuccessful. His uncle Larry Foyt was the next to exit due to an accident in Turn 2, on lap 55.

Rookies Mark Taylor and Ed Carpenter brought out caution when they connected in Turn 3 on the 63rd lap, ending both of their days. Taylor, driver of the #2 Menards/Johns Manville Dallara/Chevrolet went to Methodist Hospital for x-rays on his right foot; Carpenter was unhurt but his #52 Red Bull Cheever Racing Dallara/Chevy could not continue.

PJ Jones' rookie encounter with the 2.5-mile Indianapolis Motor Speedway oval where his father Parnelli won the 1963 Indy 500 came to an end on lap 95 when he got in the marbles and crashed coming out of Turn 2 in his #98 CURB Records/Agajanian/Beck Motorsports Dallara/Chevrolet. Jones escaped without injury.

The next incident came on lap 105 when Darren Manning (#10 Target Panoz G Force/Toyota)and Greg Ray's #13 Rent-A-Center Panoz G Force/Honda came together at the exit of Turn 4. They did a quarter-spin and collected Hornish after the 2-time IndyCar Series champion had made two pit stops to repair an errant fuel hose. All three were done on the spot; none were injured.

Marty Roth was the final driver to cause a yellow period with a single car incident in Turn 4 that caused him to retire his #25 Roth Racing Dallara/Toyota. Buddy Lazier retired the #91 LifeFitness Dallara/Chevy with fuel system woes after 164 laps; his brother Jaques, substituting for Robby Gordon who had to leave to go to Charlotte for the Coca-Cola 600 left competition after 88 laps with a broken half-shaft.

Today marked the first Indy 500 victory for Honda and the second consecutive win for American chassis builder Panoz G Force, who won last year with Gil de Ferran in the #6 Marlboro Team Penske Toyota-powered G Force. It was also the longest ABC Sports live broadcast in the history of the network - other than Olympics - at eight hours, 22 minutes.

The Indy Racing league's IndyCar Series reconvenes at the 1.5-mile Texas Motor Speedway oval on June 12th for the Bombardier 500K, race #5 in a 16- event campaign.