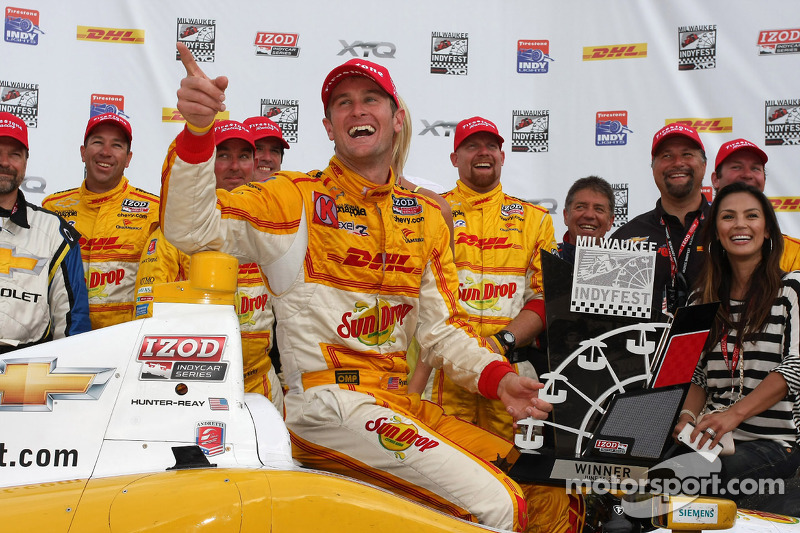 Andretti Autosport put in a full day’s work during testing at Iowa Speedway a couple of weeks ago, and that work paid off with a night full of dominance in the Iowa Corn Indy 250.

“This is a difference maker for sure,” Hunter-Reay grinned after the race. “I have to thank Marco, he came here and tested and we used the setup tonight that he worked on during that test. He did a great job in the test and on the track tonight and it’s great to have a teammate like that.”

Hunter-Reay ran in the top five all night but didn’t make his charge to the front until the last 30 laps of the evening. He powered past Helio Castroneves with 28 laps to go around the .875-mile oval to take the third spot, slipped inside Andretti five orbits later for second, then pulled a slide job pass of a fading Scott Dixon with 13 laps to go to take the lead he would never relinquish.

Andretti got past Dixon on that same lap to claim the second spot, while Tony Kanaan wrapped up a spirited charge from 19th on the grid to finish third. Andretti was chasing Hunter-Reay in hopes of challenging his stablemate for the lead, but his hopes were dashed when Katherine Legge clubbed the wall with three laps to go, forcing the race to end under caution.

“It was a great team effort tonight and while I really wanted the win, it was a statement that Andretti Autosport is the team to beat.” Andretti said.

The race had more twists and turns than a John Grisham novel, with one of the biggest shockers coming before the race event started. Polesitter Dario Franchitti never got to take the green flag as his Honda engine grenaded on the warmup lap.

“It was making a very strange noise on the warmup laps,” Franchitti relayed. “Just as I called in on the radio to ask if the engine was making noise, it let go. It’s a real shame, but it’s just one of those things.”

Points leader Will Power appeared to take himself out of the top spot in the standings as his day ended in a shower of carbon fiber due to a Lap 68 crash. EJ Viso was coming to the inside of Power, but the Penske driver never saw Viso and pinched him down low, causing contact that took both cars out of the race.

Power’s crash opened the door for James Hinchcliffe to slip into the series points lead as the Canadian driver led early after a tight pass of Castroneves. Hinchcliffe ran in the top five for most of the night, but lost his opportunity to assume the championship lead when he spun and crashed on a restart with 46 laps to go.

Aside from the Andretti Autosport dominance, the drive of the night came from Simon Pagenaud, who came from dead last in the 25-car field at the start to finish fifth. Pagenaud struggled in the qualifying heat races and gave up 10 grid spots due to an engine change, but powered through the field in what was just the fourth oval race in the Frenchman’s career.

After leading much of the second half of the race, Dixon dropped back to fourth at the checkered flag, allowing Power to maintain the top spot in the championship standings. Hunter-Reay’s second consecutive win allowed him to close to within three points of Power, while Dixon slots into the third position.