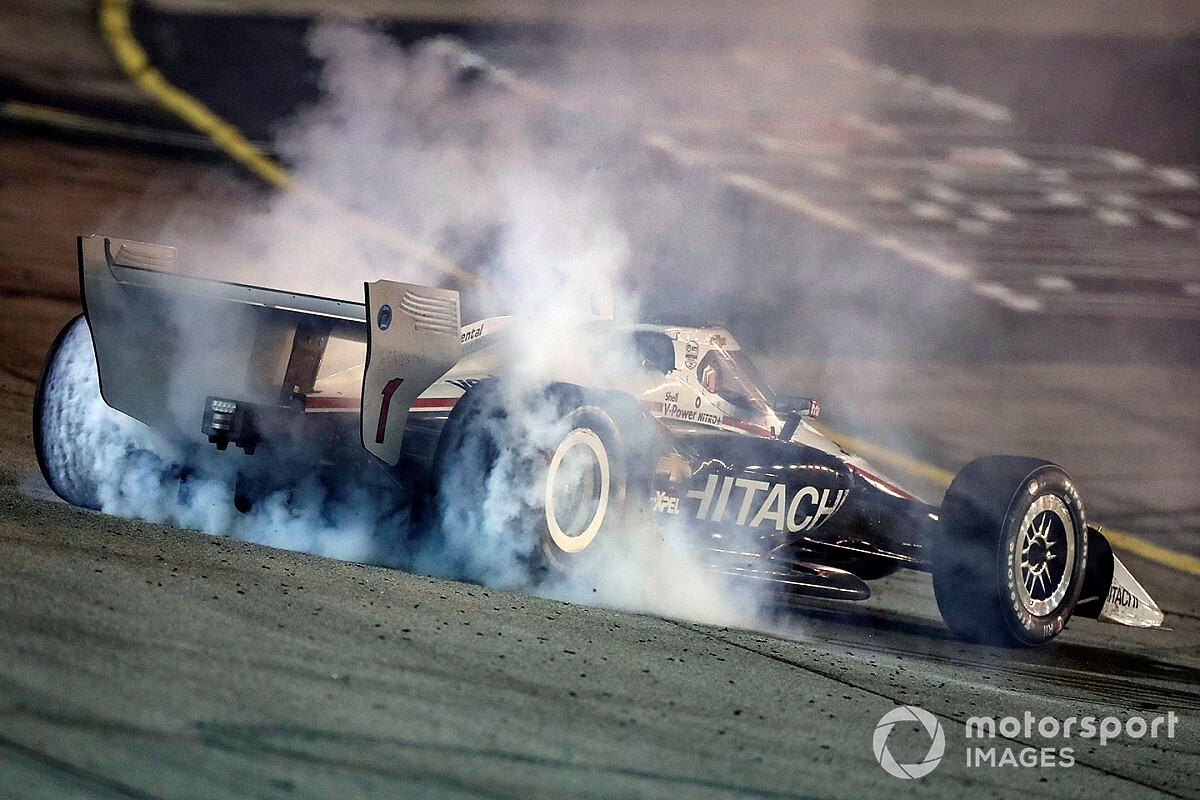 Meanwhile at the back, Scott Dixon swiftly moved up to 14th, but Friday night winner Simon Pagenaud spent the first 15 laps buried down in 21st, just ahead of Alexander Rossi’s Andretti machine.

Newgarden was lapping final runner Zach Veach just past the 20-lap mark, looking well able to deal with Power who ran 1.5sec behind, and who in turn wasn’t coming under threat from Daly. On Lap 34, O’Ward finally moved past Herta to take sixth. Herta kept slipping down, Ferrucci and Kanaan also deposing him before Lap 40, with Ed Carpenter and Ericsson then moving ahead five laps later.

Daly, O’Ward and Hunter-Reay pulled in from positions third through fifth on Lap 57, while Newgarden, Ferrucci and Harvey stopped next time by. Power stopped on Lap 59, and Newgarden’s slightly earlier stop paid off, retaining his lead. In fact, Power came under pressure from new third-place man O’Ward who duly passed him on Lap 67.

Daly continued in fourth, while fifth was now occupied by Ericsson, ahead of Hunter-Reay, Harvey and early stoppers Pagenaud, Askew and Kanaan.

O’Ward had nothing for Newgarden, but continued to pull away from Power who was struggling to hold off Daly for several laps. Finally the Carlin car made it by on Lap 88, although he was now nine seconds behind O’Ward. The next move within the Top 10 was Harvey’s pass down the inside of Hunter-Reay on Lap 94, but this was swiftly followed by Askew driving past Pagenaud around the outside. In fact, Askew was flying as he soon demoted Hunter-Reay with ease to grab seventh. RHR took the hint and pitted, and so too did Pagenaud.

On Lap 104, Power re-passed Daly before pitting, and next time by it was Newgarden who pulled down the track to come for fresh tires and fuel, and O’Ward went one lap longer. Daly held onto top spot for a few laps before heading to pits on Lap 112. Then out came the yellow for Ed Carpenter who slid up into the wall and then half spun down to the inside of the track and stalled. This came right after his ECR teammate Rinus VeeKay had stalled in his pits.

IndyCar took the opportunity to clean the track while Pagenaud, erstwhile leader Rahal – who’d made his first stop late and hadn’t made his second when the caution flags flew – Ericsson, Dixon and Sato all stopped. This worked out well for Rahal and Pagenaud who thus cycled through to fourth and fifth, and Dale Coyne Racing with Team Goh’s Alex Palou.

Those who had suffered with their pitstop timing being out of kilter with the fall of the yellow included Askew who had now fallen to 13th and a lap down. Following the Lap 126 restart, his attempts to get his lap back were fun, involving touching his teammate O’Ward who was still trying to pursue Newgarden, and also getting very brave with Alexander Rossi who had been similarly unfortunate with his pitstop timing and gone a lap down.

Rahal was looking feisty too, taking third from Power who was just about staying clear of Pagenaud, Hunter-Reay, Kanaan, Palou, Daly and Harvey. In 11th ran Dixon.

By Lap 160, Newgarden found himself struggling to get around Herta to put him three laps down, and found his mirrors full of O’Ward. Once the Penske champion succeeded, however, he pulled out a 1.5sec lead. O’Ward stopped on Lap 173, but the right-rear tire wasn’t tightened and he had to suddenly stop as he was leaving his pitbox. The car was dragged back for his crew to finish the job.

Unfortunately during the flurry of pitstops, for the second consecutive night Hunter-Reay half spun as he departed pitlane and smacked his left-front against the wall, this time bending his suspension beyond immediate repair.

The timing of this full-course caution left Askew and Rossi in first and fourth but needing to stop again, and just waiting for the pits to open. They sandwiched Newgarden and Power. Daly, who had stopped earlier than the others, had taken full advantage to move from ninth to fifth (soon to be third) and jump Rahal and Pagenaud. Harvey, Dixon and Kanaan completed the top 10 at this stage. Sadly for O’Ward, the timing of the caution and his dreadful pitstop had left him 13th and a lap down.

The Lap 192 restart would see Newgarden leading Power, Daly, Rahal, Pagenaud, Harvey, Dixon, Kanaan, Ericsson. Initially Newgarden soared away, with the lapped O’Ward and Palou as his buffer back to Power, who had to work hard to keep Daly behind at first. Then he pulled out a 2sec margin, while Daly’s mirrors were full of the battling Rahal and Pagenaud. Daly ducked into the pits on Lap 219, his early final stop costing him on this occasion.

With Daly out of the way, Rahal was able to use the clean air ahead to pull away from Pagenaud and close down on Power in the closing 30 laps, but stalled out around 0.6sec behind as the worn tires wouldn’t allow him to run in the dirty air with any confidence.

No one had any answer for Newgarden who led 214 of the 250 laps, won by 2.7869sec and worked off some of the frustration of the night before when he lost out to a caution flag. For Power, a decent result was a relief, while Rahal who hadn’t finished top three on an oval since Texas last year was content with third.

Pagenaud fell 2.5sec short of making it a 1-2-3 for Team Penske, but kept championship leader Dixon behind him for a second straight night.

Askew salvaged sixth for Arrow McLaren SP ahead of Harvey, Rossi, Ericsson and Marco Andretti, who passed Kanaan for 10th on the final lap.

Newgarden feels redemption after anger of night before