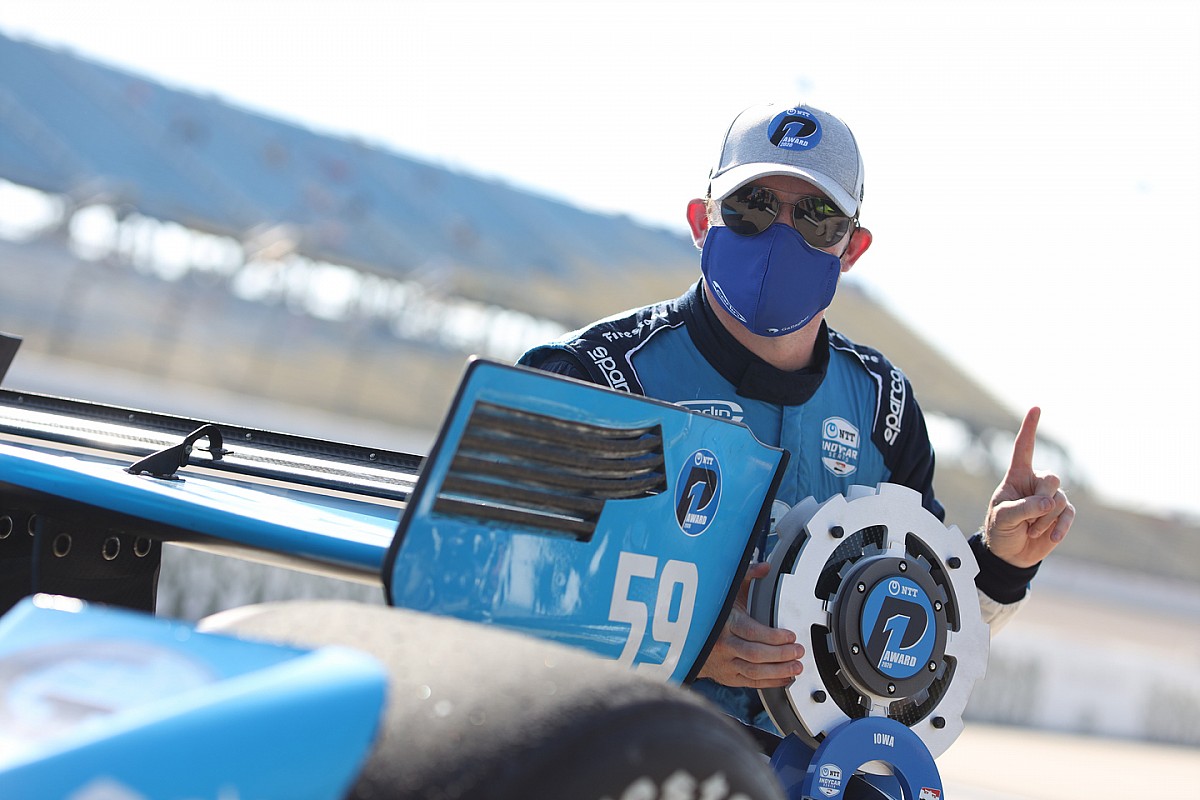 Conor Daly scored his and Carlin-Chevrolet’s first ever NTT IndyCar Series pole position for tonight’s Iowa 250 race and was only pushed down to third for the second by the Team Penske-Chevrolets of Josef Newgarden and Will Power.

Daly set a brilliant first lap of 175.188mph that was unmatchable even by Newgarden and Power, ensuring he kept top spot for Race 1, while the second lap – which decides Race 2 – was a 174.9, which eclipsed all but those two Penske drivers.

Daly, who had never started inside the Top 10 on an oval before, thus delivers Carlin its first IndyCar pole in the squad’s third year in this series.

“Man, it’s just way better than last weekend, that’s for sure," he said afterward. "I’m just super happy to be here. I’ve struggled at Iowa, personally; and I’ve learned a lot lately. Carlin and this team has done an incredible job. We’ve improved exactly where we needed to from last year. We did the same at Texas. So mission one is accomplished; obviously starting up front is super, super helpful. So, we’ve just got one more mission left tonight and hopefully we can come out of here with some trophies.”
"I’ve started on the last row here pretty much every time I’ve run here. So, that’s quite a difference. If I have the car to do what I just did, I thrive it seems to be like. So, I’m super thankful that these guys have worked with me and have listened to what I’ve said, and we’ve all worked together as a team. And, we’re the only one-car team out here, so it’s nice to have us up front.”

Colton Herta’s Andretti Harding Steinbrenner Autosport machine bottomed out at Turn 4 on his qualifying run but he held on to claim fourth, ahead of Andretti Autosport teammate Alexander Rossi whose first lap was brave and wild.

Takuma Sato, a former Iowa polesitter, was sixth for Rahal Letterman Lanigan ahead of the fastest Chip Ganassi Racing-Honda of Felix Rosenqvist who, as in last week’s second race at Road America, just eclipsed the Arrow McLaren SP-Chevy of Patricio O’Ward.

The 2016 and ’19 Iowa polesitter Simon Pagenaud in the third Penske had the worst day of anyone, unable to take his qualifying run reportedly because of no fuel pressure, and he is thereby consigned to the final row for both races.

Champion Scott Dixon also struggled after using the whole track, and will line up 17th.

For tomorrow evening’s race Newgarden and Power have locked out the front row while Daly will start alongside Andretti Autosport’s Ryan Hunter-Reay and Herta.

Like Hunter-Reay, Meyer Shank Racing’s Jack Harvey felt out his first lap and then laid it on the line in Lap 2 to grab sixth on his first ever qualifying run at Iowa.

Rookie Alex Palou was also impressive for Dale Coyne Racing with Team Goh, taking seventh, just ahead of the most experienced man in the field, 45-year-old Tony Kanaan in the AJ Foyt Racing-Chevy.

Marcus Ericsson and Rosenqvist rounded out the Top 10 for Ganassi, while teammate Dixon’s poor first lap led to only 18th on the second.

The same was true of Zach Veach, whose Andretti car had a huge moment in Turn 4 at the end of his first lap, killing the speeds for both laps.