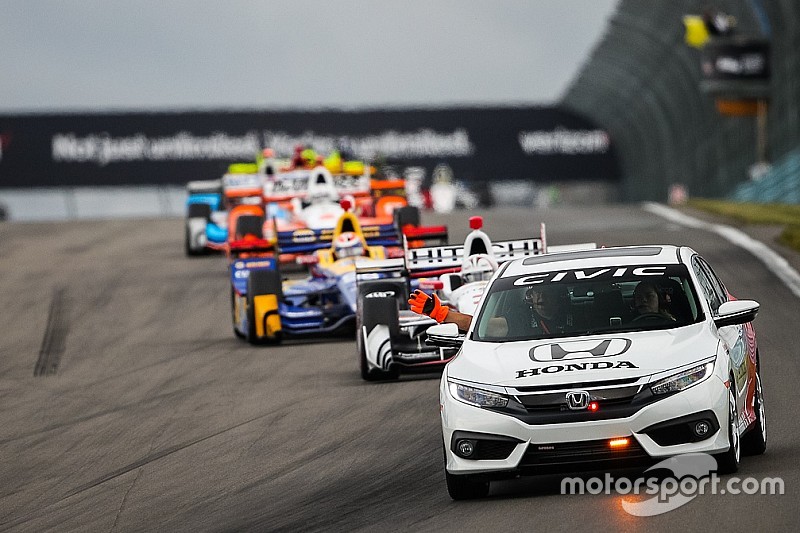 Revising the rules regarding closed pits under full-course caution periods and deciding on a new procedure for oval qualifying are under discussion by IndyCar and its teams, following last week’s meeting between the series and team managers.

Jay Frye, president of competition and operations at IndyCar, has pledged to try and change the procedures that can harm the “purity” of the races, and to try and ensure the best teams and drivers at any given event, rather than the lucky ones, are rewarded.

One of the regular topics of debate over the past decade and more has been the automatic closing of the pits under full-course cautions. Even at its best, this eliminates the gaps between cars, but at its worse it can upend the running order.

If some drivers have pitted already and then the yellows fly, those who haven’t pitted  – perhaps because they’ve been better at going fast while fuel saving – are left stranded on the track at pacecar speed, allowing those who have pitted already to pack up behind them, and then hit the front once the pitlane is opened and the leaders go for their fuel and tire stops.

Frye told Motorsport.com that he wishes to alter this procedure so as not to punish the best drivers.

“Every offseason we look at what we did in the prior season and examine what we can do better,” he said. “We check out what technology is out there for 2018 that maybe wasn’t there going into ’17, and figure out how that might help what we’re currently doing from a procedural process.

“And closing the pits under yellow falls under that discussion topic. Anything we can do to make track position and running order less random, the better. We owe it to our teams, drivers and our fans to come up with a solution that doesn’t randomize things, doesn’t leave people asking questions and wondering what just happened.

“So I’m going to COTA for the Formula 1 race this weekend to see what technology they have that could help us, what would fit for us. Having Cosworth and Pi electronics for all teams and engines in IndyCar should make it possible to come up with a solution.”

Although Frye wasn’t yet prepared to discuss how they might impose speed restrictions – via Race Control, virtual safety car, fixed speeds past accident scenes, etc. – he did say that protecting drivers and safety crew members would remain the imperative part of any new procedure. The main reason for currently closing the pits under caution is so those who haven’t pitted won’t continue at racing speed past an accident scene in order to pit and regain the track without losing their on-track advantage over those who’ve stopped already.

“Maybe we do it differently according to the type of venue. Some of our limitations have been imposed by the diversity of the series’ tracks, so for example, when we go to street courses, there are certain things we can’t do. Timelines on city streets or runways can become an issue.

“But we are looking different technology to see if we can find a solution that will make a positive difference. We’ll come up with A, B and C options, talk to everybody about these and get their opinions. Then once we decide on the solution and write the rules accordingly, we’ll make sure everybody including the fans understand the criteria going forward.”

Frye's quest to ensure IndyCar racing is a meritocracy also extends to qualifying procedure on ovals. There have been increasing calls from drivers to change how running order is decided – currently achieved by names being picked out of a hat – since the early runners encounter the least favorable track conditions. Team Penske’s Josef Newgarden and Will Power recently told Motorsport.com that this can be so critical when it comes to race/championship outcomes that an alternative method needed to be found. It’s a point with which Frye agreed.

“Yeah, we’re definitely looking at it, again to remove this random element in a race weekend,” he said. “As you’d imagine, there’s probably five or six legitimate ways of doing it differently – practice speeds, going in reverse order of points, and so on – and we’re looking at several different options.

“Over the course of five or six events, the odds are that the order selection will shake out – good draw, bad draw – but it may not. And like I said, I’m a big proponent of procedures and processes, and the less randomness the better.

“But when you throw out to the team managers different scenarios as possibilities, the answers that come back will point out the nuances of each one, good and bad. So we’ll sort through those nuances for each procedure and decide which is the best.

“So in answer to your question, is oval qualifying going to change from last season? Probably, yes, but I’m not sure which direction we’re going to go yet.”