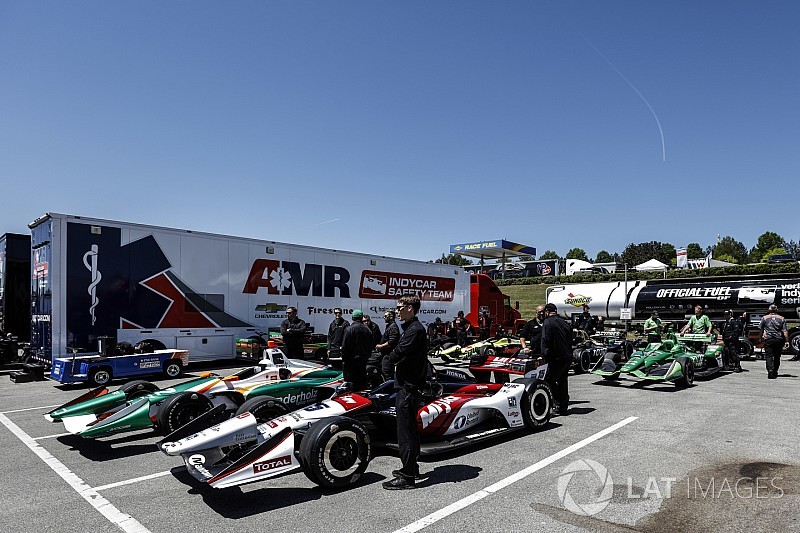 Kevin Blanch, IndyCar’s technical director, says reversion to a universal aerokit in 2018 has made the rules easier to apply, but he expects tech inspection to get more complicated as IndyCar starts to open up development areas in 2019.

Blanch, who joined the IndyCar technical staff 15 years ago, observed that new rules were hard to define with the 2015-’17 manufacturer aerokits, especially given the fact that a general technical rule change could favor one kit over the other.

He told Motorsport.com: “There’s a lot less tooling now, that’s for sure. When we had manufacturer aerokits, we had double of everything, now we have single of everything, and similar to the way we had [pre-2015], you can really adjust the rules to the way the car is built.

“The past three years, everything had to fit in a box. Now if we’re looking at not being as tight on the wing height or main plane angle, it’s a lot easier to free that up for everybody because we’re not favoring Honda’s aerokit over Chevrolet’s aerokit or vice versa.

“So yeah, it’s a lot simpler. We were able to get with the teams and come up with some common sense approaches, whereas with the aerokits, you couldn’t do that. We’d tell them, ‘Here’s the number, you figure out how to fit the number.’ So now we’ve flipped that around, where we are saying, here’s the part, we’ll make the part fit where we think it should fit, and now you all go away and find how that part works for you.

“With the manufacturer aerokits, we’d say that wherever you put your endplate, it has to remain in the box. Now we can tell them, OK, at zero degrees, it needs to be X number and they can then adjust to whatever angle they want.

“And on the rear wing, we made them go from the plus-2 degrees to minus-9 degrees in the rule, so we’re trying to set our boxes, our tolerances, at that point. It’s a lot easier to truly develop the rules to fit the car.”

Next year, he added, with teams allowed to engineer their own parts in certain technical areas of the car, it will get more complicated once more.

“Yeah, any time you open up a rule, you make it a little harder to reinforce,” he said, “because now you’ve got to go back to the whole system of, ‘Here’s the number, you fit the number,’ and it becomes a lot more intense as teams come up with different engineering ideas. At the moment it’s good because there are not that many options to this car; it’s part on, part off. We work really close with Dallara, and I supplied to Dallara a lot of my tooling so they can check the parts before they deliver them.”

Despite the 102nd Indianapolis 500 being the first event for IndyCar teams using the superspeedway version of the aerokit, Blanch said that he hadn’t yet seen a lot of variations in setup – although that’s partly because IndyCar has been more restrictive with the new kit.

“Carb Day [the final hour of practice, on Friday] for sure, you’ll start to see what the teams are truly going to run,” he said, “and that will partly be based on where they’re starting in the field.

“The engineers are learning, same as the mechanics. I don’t think they feel restricted. You’re just always gonna get a little bit of argument about ‘I don’t think it should be that number, it should be this number.’ But as a group we all got our heads together and asked ‘Does it make sense? Are we causing you a lot of work by saying the setting has to be this? Or should it be that?’”

Blanch also expressed confidence that the 2018 car can produce another classic Indy 500, based on what he observed during Monday’s three-hour practice session.

“Going on yesterday, it looks like the racing’s going to be impressive,” he said. “The passing looked good, we’re not gonna lose anything. From what I’ve seen, in the turns, the drivers are back to running half a car up on the car in front, where you hang the wing out to catch more clean air, whereas before they could tuck right up and in line with the car ahead. Now there’s a little offset to try and keep some downforce.

"But there’s passing and there’s going to be more as people make mistakes on worn tires near the end of a stint. The car’s going good, it’s race fit.”

Injured Fittipaldi “living the race” with Coyne's team at Indy