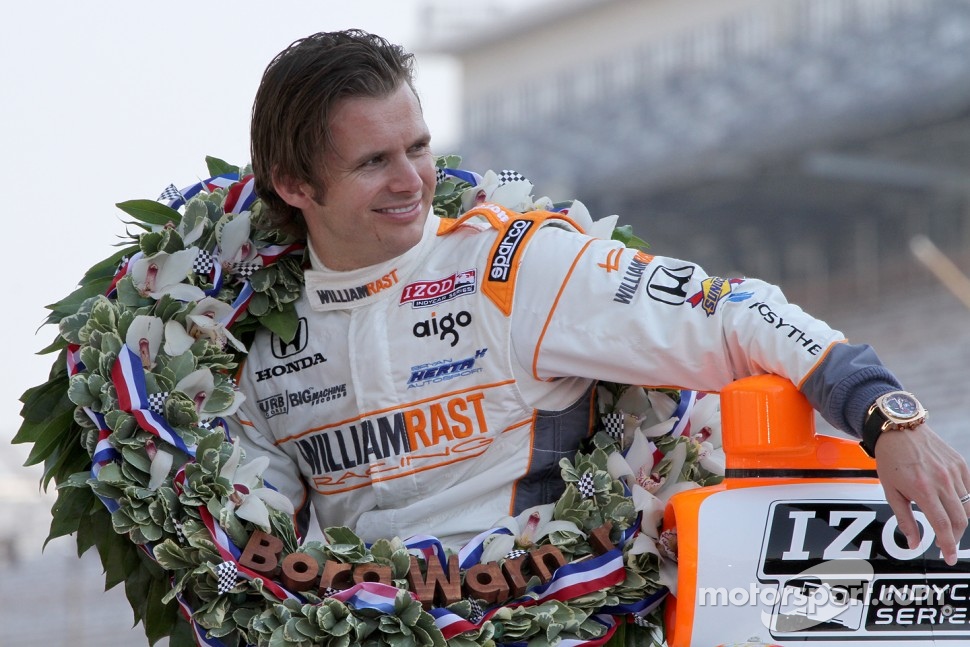 Following is a statement from INDYCAR CEO Randy Bernard:

"INDYCAR is sad to announce that Dan Wheldon passed away from unsurvivable injuries. Our thoughts and prayers are with Dan and his family. INDYCAR, its drivers and teams have decided to end the race. We will run a five-lap salute in honor of Dan."

"We are incredibly saddened at the passing of Dan Wheldon. He was a great champion of the Indianapolis 500 and a wonderful ambassador for the race, the Indianapolis Motor Speedway and all of motorsports. Most importantly, he was a fantastic husband, father and man - a good friend to so many in this sport. His memory will live forever at the Speedway, both through the magnitude of his accomplishments on the track and his magnetism off the track. Our deepest sympathies are extended to his entire family, team and fans."

GP Sports Management is deeply saddened by the tragic loss of our dear friend and client, Dan Wheldon.

Dan was a winner. For the past 11 years we were privileged to watch Dan become a champion on the track and a devoted family man off it. He loved the Indianapolis Motor Speedway and was immensely proud to have his name etched twice on the Borg Warner trophy alongside some of the Indy 500 greats.

He touched so many people in racing and around the world with his warm smile, his charming personality and his genuine good nature. Dan loved his fans and always took that extra bit of time to take a photo, to sign an autograph, to make some young kid smile at the racetrack. Everyone wanted to be around Dan. His passion and his enthusiasm for life was infectious. We will all miss him...

A true champion of motorsport...

A proud brother to Austin, Ashley, Elliott and Holly...

A devoted son to Clive and Sue...

A loving husband to Susie...

A doting father to his boys, Sebastian and Oliver...

Rest in peace Dan...your memory will live with us forever.

We would like to thank everyone for all of the messages of condolences that we have received and right now our thoughts and prayers are with the entire Wheldon family.

Wheldon was one of 15 drivers involved in the collision, which took place in Turn Two, after relatively minor contact between two cars set off a large, chain-reaction crash. Running in the middle of the field, Wheldon’s car went airborne before making heavy impact with the retaining wall and catch fencing. He was airlifted to University Medical Center, where he succumbed from his injuries.

Wheldon was a mainstay of the Honda IndyCar program from his debut in 2003 with Andretti Green Racing. In 134 IndyCar race starts, he won 16 times, and recorded 93 top-10 results. Wheldon won the Indianapolis 500 for the first time in 2005, going on to win the series championship that year, and won the ‘500’ again earlier this year. He also scored Honda’s first IndyCar victories at Twin Ring Motegi in Japan, winning at the Honda-owned circuit in 2004 and again in 2005.

In addition to his parents and siblings, Weldon is survived by his wife, Susie, and sons Sebastian and Oliver.

Erik Berkman (President, Honda Performance Development) on the loss of Dan Wheldon: “For everyone in the Honda family, this is a day of tragedy and incalcuable loss. For us, Dan was more than a driver, he was a member of the Honda family. But most of all, our thoughts and prayers go out to his family, wife Susie and two young sons. Dan had a passion for motorsports and a wonderful personality that made him a friend to everyone in the racing community. His talent and dedication were an inspiration to us all. We will miss him terribly, and everyone at Honda extends our deepest sympathies to his family, friends and fans across the world.”

Firestone Racing statement on the passing of Dan Wheldon

From Al Speyer, Executive Director, Firestone Racing: "The Firestone Racing team is deeply saddened by the death of Dan Wheldon. We have very fond memories of celebrating with Dan at Indianapolis following his win this year, and he was a true champion. "Recently, we had been working very closely with Dan on the development of the 2012 IndyCar. His passion for the sport was evident every day and he worked endlessly to do the best he could at everything he did. We extend our sympathies to his family, to his team, and to his many friends and fans. He was a talented competitor on the track who will be long remembered by all who had the privilege of working with and knowing him."

Infineon Raceway Statement on the Passing of Dan Wheldon

Statement from Steve Page, president and general manager of Infineon Raceway, on the passing today of INDYCAR driver Dan Wheldon:

“This is a truly heartbreaking loss. Dan Wheldon was a terrific driver and a great champion, but overall he was one of the most engaging, intelligent and colorful individuals in our sport. We were fortunate to work with Dan as a regular promotional partner over the years. We will miss his competitive drive on the track and his energy and sense of humor in the paddock.”

Dan Wheldon stats at Infineon Raceway: Wheldon had six INDYCAR starts at Infineon Raceway from 2005-2010 with a career-best finish of fourth in 2008. Overall, he had three top-10 efforts in the six starts in Sonoma (sixth in 2006 and seventh in 2007). His last race in Sonoma took place on Aug. 22, 2010 at the Indy Grand Prix of Sonoma, where he placed 25th.

JIM MICHAELIAN, PRESIDENT & CEO, GRAND PRIX ASSOCIATION OF LONG BEACH: “On behalf of the Grand Prix Association of Long Beach family, our hearts are saddened to hear the news of the passing of Dan Wheldon. He was a great representative of our sport and personified what the IZOD IndyCar Series is all about. Our thoughts and prayers go out to his wife, Susie, his children and family. He will be sorely missed.”

Along with everyone at Homestead-Miami Speedway and the entire racing community, I am saddened by this news. I offer my condolences to the Wheldon family, especially wife Susie and her two young sons. I had the opportunity to spend time with Dan at promotional events and always came away impressed by his warmth and sincerity.

"We share the sorrow of the IZOD IndyCar Series and motorsports community on the passing of Dan Wheldon. He was a great friend to Kentucky Speedway and recently lent his personality to promoting this season’s 300-mile event at our track by participating in a Macy’s shopping spree with a youth. An exemplary person and competitor will be sorely missed."

Statement from Texas Motor Speedway President Eddie Gossage on IndyCar Series driver Dan Wheldon, who lost his life Sunday after being involved in a multi-car accident during the IndyCar Series season finale:

"On behalf of the entire staff at Texas Motor Speedway, our sincere condolences go out to Dan's wife Susie and their two young boys, Oliver and Sebastian. Dan was a tremendous race-car driver and even more tremendous as a person. I was fortunate to get to know Dan over the years with the series annually visiting Texas Motor Speedway and he always arrived with that infectious personality and charming wit. His outstanding skill in the cockpit and his personality and good nature out of it will be greatly missed by the entire IndyCar community."

“NASCAR offers its deepest sympathies and condolences to the family of Dan Wheldon, his teammates, and the entire IndyCar Series community for their tragic loss today. They will be in our thoughts and prayers during this very difficult time.”

“The world of motorsports and everyone at NHRA is deeply affected by yesterday’s tragedy in Las Vegas involving Dan Wheldon. On behalf of the entire NHRA family, our hearts and prayers go out to the Wheldon family and the entire IndyCar racing community. We are truly saddened by this tragic loss of such a great champion and person.”

Team and driver statements on the passing of Dan Wheldon