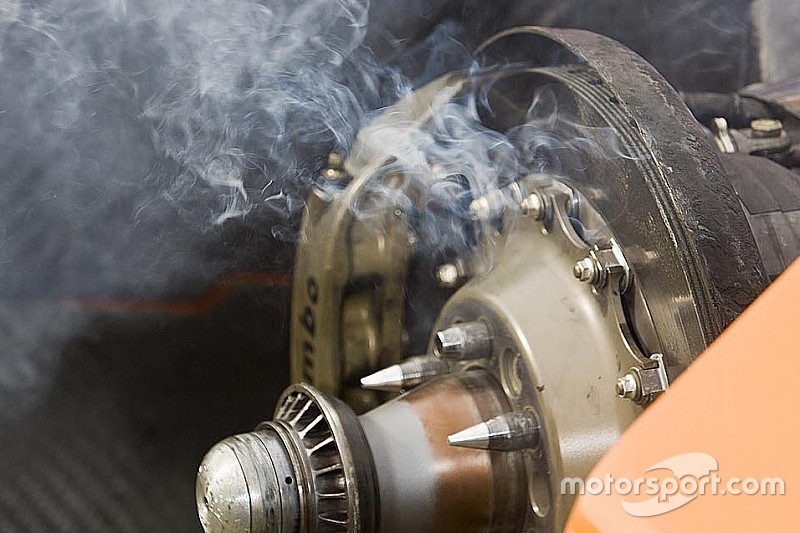 Performance Friction has become clear favorite to replace Brembo as spec brake supplier for IndyCar from next year.

Motorsport.com has learned that Chip Ganassi Racing, Rahal Letterman Lanigan Racing and Andretti Autosport tried brakes from alternative suppliers – along with a revised Brembo setup – in the Road America test in June. As a result of this test, Performance Friction Corporation has emerged as a favorite.

The brake evaluation which was blind – as in the drivers weren't made aware beforehand which manufacturers' brakes they were testing – followed long-standing complaints about heat consistency issues with Brembo’s current package.

Bill Pappas, VP of competition and race engineering, told Motorsport.com: “Nothing has been finalized yet. We tested three manufacturers – Brembo obviously, Performance Friction, and a third company which… I don’t think there’s a need to bring them up.”

Explaining the search for a new brake supply, Pappas said: “Brakes have been such a source of headaches so we need to find something to alleviate the consistency issues that the teams have had through the last four-and-a-half years.

“We’re not looking for a performance change. We just need something the guys can bolt on and know that it will be the same leaving Long Beach and arriving at Barber or however the schedule is constructed. We’re trying to make it more consistent for the drivers and more cost-effective for the teams.”

Pappas said that in the switchover the brakes would remain both spec and single-source, and that the series would be “trying to keep the costs as close to the current costs as possible.”

Although Pappas added that he hasn’t closed the door on Brembo and is “still evaluating various options,” he did state: “Performance Friction pitched for the initial contract for the DW12 and for whatever reason, IndyCar went with Brembo. But PFC rate very highly in terms of quality and in the 20-something years I’ve known them, they deliver what they say they can deliver.

He added: “For the sake of the series I want everyone to have the same equipment. We don’t want brakes affecting performance from one car to the next.”

The problem from the driver’s perspective

Sebastien Bourdais of KVSH Racing was not at the Road America test due to his Le Mans commitments, but has been one of the more regular and outspoken drivers regarding brake problems. He says, for example, that braking issues were what limited him to 12th on the grid in the last race at Road America.

Bourdais told Motorsport.com: “I think it’s one of those things where everyone stopped talking about it, but everyone’s been struggling with [Brembo] brakes – starting to pull and lock and having big differences in temperature from left to right.

“It’s been a recurring problem which is frustrating because brakes are supposed to be bolt-in parts that just work and no one should really have to discuss. You try and tape up the ducts but then you start getting overheating and temps start drifting the other way.

“It’s been an uphill battle, and there’s a reason why the series organized a test with other manufacturers at Road America. Right now, it is what it is, but it sucks when it happens in qualifying, like it did for me at the last race.

“We got to where we thought we’d stabilized the brake temperatures but in qualifying there was a 300degF split across the rear axle, between left and right. So when I jumped on the brakes, the car pulled massively to the right and locked the left-front. Tough to put a lap together with the brakes behaving like that.”