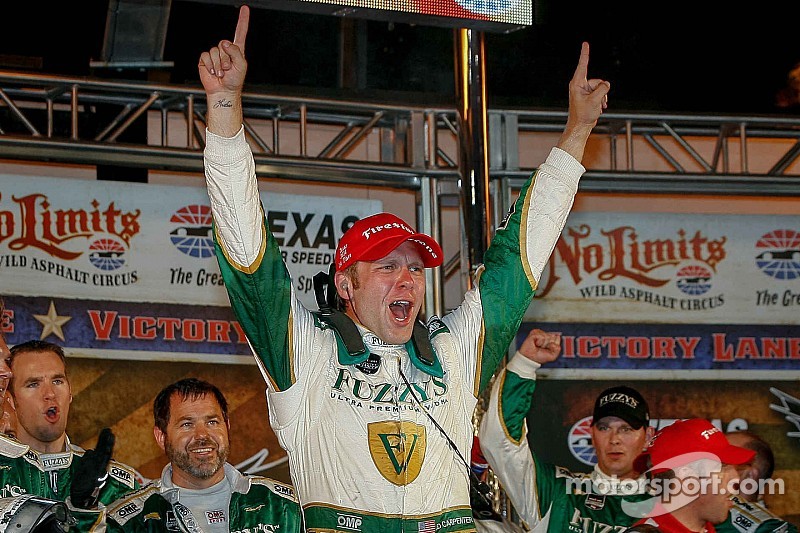 Ed Carpenter is no dummy. When the Butler College business grad started his own Verizon IndyCar series team he rented space in then-team manager Derrick Walker’s shop off Guion Road in Indianapolis. it was an ideal situation for both of them - even after Walker left to be president of racing operations for sanctioning body INDYCAR.

As his team became stabilized in the series with its first victory in Fontana in 2012, the first of two consecutive pole positions at Indy (2013-14), the hiring this year of Mike Conway to handle road/street course racing duties (net, two wins in less than one season) well, the thought of two cars began to grow stronger. JR Hildebrand served as the first Carpenter teammate in the 2014 Indianapolis 500 and did a good job.

Yet there were always challenges with this scenario, not the least of which being money. We all know that’s what powers every form of motor sport and there just isn’t a lot in the always entertaining IndyCar Series right now. Ed Carpenter Racing (ECR) has some stability with Fuzzys Ultimate Vodka decorating his car and palate, but there are many others that lack any true sponsorship dollars (and we don’t know the amount of money that changes hand between Zoeller and Carpenter - it’s really none of our business).

One INDYCAR team that’s needed sponsorship dollars and a proper teammate to their driver Josef Newgarden is Sarah Fisher Hartman Racing (SFHR), led by the strength of former INDYCAR and sprint car racer Sarah Fisher and oil man Wink Hartman. That team won its first race at Kentucky Speedway with Carpenter at the helm in 2011, just before he left to begin racing as the sole owner/driver in the Verizon IndyCar Series, a title Carpenter still holds (now that Fisher has given up her own driving career to take over her team’s operation and start a family).

With Nashville, TN’s own Newgarden racing for SFHR, the team has progressed over the past three seasons. It hasn’t been easy and it certainly hasn’t been terribly lucrative for them as they’ve melded their driver into the fine overall racer he is today. Newgarden appeared to be en route to victory several times in 2014 - most recently at Mid-Ohio Sports Car Course, but things beyond his control negated those opportunities. He looked wicked good at The Milwaukee Mile, where Newgarden was the first Honda finisher in fifth place, driving with Direct Supply colors. No doubt much financial assistance has come from Hartman, who’s stood up for this small group and helped them progress up the INDYCAR ladder.

Last week at Milwaukee these two teams announced they’ll be merging after the season is done - only two races to go - and begin the 2015 as CFH Racing (I guess they did this alphabetically?). While one of the drivers will certainly be Carpenter, Newgarden has repeatedly said he isn’t talking about his future until after this year is done. We can only hope that the fourth year is the charm for the charismatic, hysterically funny and supremely talented in the race car. He’s also got the best hair in the paddock (sorry Helio).

The team will be based at SFHR’s new Speedway workshops within walking distance of Indianapolis Motor Speedway. There’s space enough for two squads to work on two cars and it’s a truly hospitable place, as you’d expect. It certainly has a woman’s touch in decor (and I hope that doesn’t change). No decisions have been revealed on engine choice - Carpenter is in the Chevy camp; SFHR uses Honda engines - and whether the two teams will stay intact as they are now.Because of their relative size, both ECR and SFHR have little waste in terms of human resources and should remain fairly intact.

From this soapbox, the merging of these two teams is a combination of equal parts. Both team owners have similar racing backgrounds, both have hard-working crew members that are extremely loyal and both have aspirations of better results in the series next year. They’ve been friends for a long time, too. At this point it’s not known whether Conway can return to Carpenter’s side of the garage or not, which creates the need for a road/street-course expert. That would be Newgarden, who can likely up Carpenter’s left/right capabilities if he’s smart and sticks around.

However it works out with the merged team’s second driver, and I sure hope it’s Newgarden because I don’t think he’ll find a better group to work with than this merged pack, I think this is a win-win situation for Ed Carpenter, for Sarah Fisher, the entire O’Gara family and Wink Hartman. Two good teams with similar philosophies and a great friendship ought to be milk and honey. Let’s just hope some more money heads their way so they can move up the food chain even quicker.