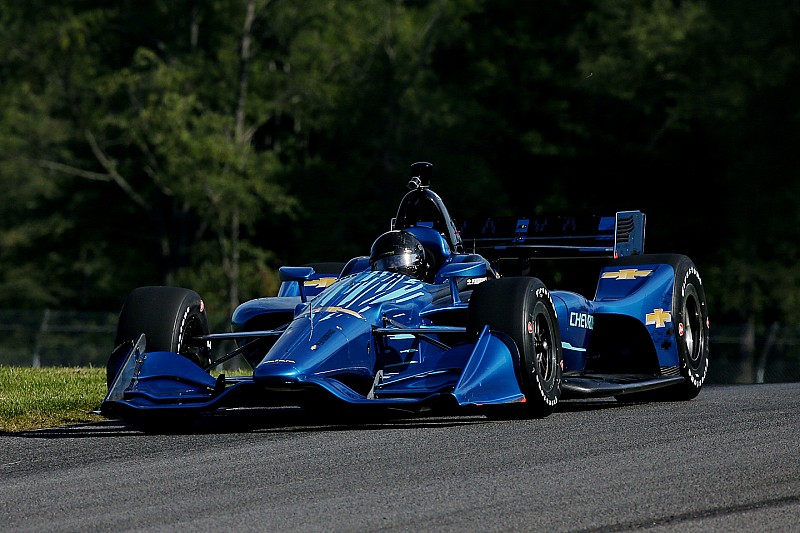 The universal 2018 IndyCar road course body kit made its debut at Mid-Ohio on Tuesday, and it didn’t take long for test drivers Juan Pablo Montoya and Oriol Servia to extol its virtues.

The veteran test drivers both had big smiles on their faces when they got out of their respective race cars, and the word fun' was what was most commonly heard when the drivers talked about the new body kit that generates between 25 percent and 30 percent less downforce than the current manufacturer body kits.

“I think when you really drive the car, people from the outside need to see you are hustling the car,” explained Montoya.

"Things that normally used to be a gimme, with this car it’s like “Oh My God!” Going over the crest in the back [Turn 9] your spinning the tires, you’re sideways through there. Even out of the last corner it will be easy to get in trouble."

“In qualifying [at Mid-Ohio last weekend], I’m pretty sure these guys were almost flat in Turn 1," he said. "You can’t do that with this car.

"You have to lift, touch the brake a little bit, and you’re still not sure if you’re going to make it, so it’s definitely more challenging.”

Servia even went as far as comparing the 2018 test car favorably to the Toyota-powered Reynard he drove in his 2000 CART rookie season.

“You definitely feel the power,” explained the veteran Catalonian pilot. “The car accelerates more on the straights because there is less drag, so it keeps accelerating, and you keep shifting gears.

"It reminds me a little bit of my rookie year in 2000, where it’s not only how much it accelerates out of the corners, but it keeps accelerating - fourth, fifth, sixth - it keeps going - it feels a little bit like that. Just fun! I think it’s going to create more overtaking too. It’s a lot of fun!"

Predictably, Montoya asked for more power, but did concede that with the reduced drag and downforce, the potential to get into trouble with the throttle has returned.

“The next step, needs to be a little more power, but you can really tell the power now with this lighter downforce,” said the two time CART champion. "You can get in trouble easier. With the higher downforce, the throttle is pretty much like a switch.

“The speed is quite a bit higher in the straights. I think more than 4 or 5mph than the current kit.”

The fastest trap speed recorded in the trap on the run between Turn 2 and Turn 4 during Sunday’s Honda Indy 200 at Mid-Ohio was 179.741mph by Simon Pagenaud on Lap 52.

If Montoya is correct, that means that IndyCars could top 185mph before getting hard on the brakes in the downhill run to the right-hand Turn 4.

The day of testing took place in perfect weather conditions, and started out when Montoya took his Penske-prepared, Chevrolet-powered Dallara onto the 2.258-mile, 13-Turn natural terrain road course just after 8:30am for an installation lap.

The Honda-powered Dallara test car prepared by Schmidt Peterson Motorsports, and piloted by Servia quickly followed his fellow veteran to begin a full day of testing.

Both drivers did a number of shorter runs when the track was still green, but both ended the morning session with two longer runs, not wasting anytime getting going.

“You do a couple of smooth laps to make sure everything runs good, and just go for it, explained a non-plussed Montoya, adding: “It’s a car.”

Both drivers did a number of shorter runs to start the afternoon, but quickly switched to race runs a little later.

Lap times were not shared and are all unofficial, but an unofficial stopwatch did have Montoya under the fastest lap of the 2017 Honda Indy 200 at Mid-Ohio of 65.9698 seconds, set by Andretti Autosport’s Alexander Rossi on Lap 41.

The day ended with the two test drivers running nose-to-tail for a race run. The two drivers did switch who was leading and were able to run closely through Turn 4, Madness, and The Esses.

Being a little more predictable, you can be a little more aggressive, explained Montoya, when asked about the aerowash with the 2018 body kits.

“The current car, really doesn’t have the diffuser, so when you’re behind people you lose a lot of the rear downforce that you shouldn’t," he said. "You normally you just get understeer [when you are too close] with the 2018 car. With the current car you just get oversteer, and that’s not good.”

Montoya and Servia will be back on track for testing at the Iowa Speedway short oval on August 10 and Sebring International Raceway on September 26.

Urrutia claims to be close to IndyCar deal for 2018