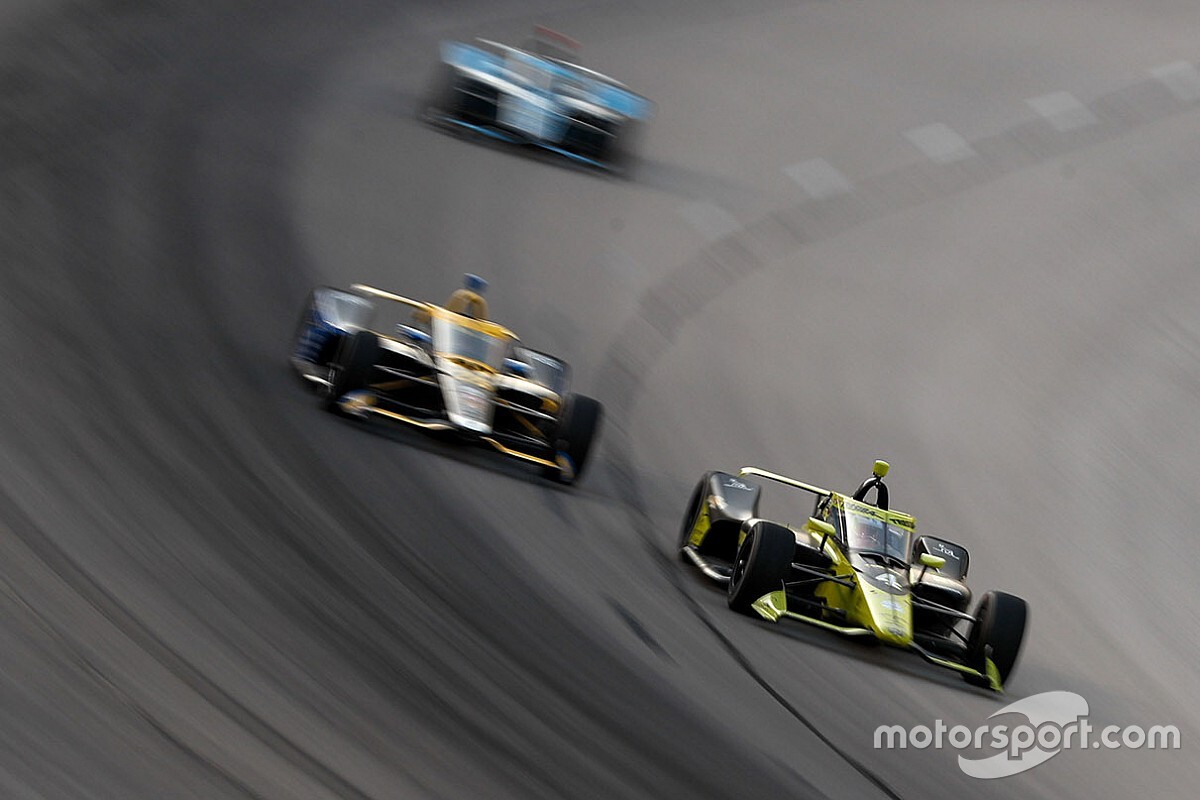 Texas Motor Speedway president Eddie Gossage says that the NTT IndyCar Series’ return to action in the Genesys 300 was a success, and explains that the knock-on effect of a traction aid substance affected the cars’ abilities to use all the track.

The synthetic resin PJ1 TrackBite has been used in the turns at various tracks to increase the grip offered by the surface, thereby helping to improve the racing in NASCAR by allowing cars to run multiple grooves and creating more side-by-side action.

PJ1 was applied to Texas Motor Speedway last November ahead of the AAA Texas 500, and while its effect should have long since dissipated over the past seven months, it did have a knock-on effect for IndyCar last Saturday where several drivers felt they were dealing with a ‘one-groove’ racetrack due to the slippery nature of the areas where PJ1 had been applied.

Gossage explained to Motorsport.com: “PJ1 usage is determined by what used to be the NASCAR’s drivers’ council and NASCAR. They determine if it will be used and where it should be applied. If more is added on race weekend, which happens at some tracks, it is determined by that group. The track doesn’t have much say in it…

“Texas has three year old asphalt and new asphalt does not develop multiple lanes. Since drivers stick to the bottom, no rubber gets worked in higher than the bottom groove. So they prefer the PJ1 be used higher in the turns to help them stick higher up.

“From what they tell me, heat activates PJ1, whether that be the sun or hot tires. None has been applied to the track since November and we used a tractor with a brush on it extensively last week, which is always the case with the entire track. It’s routine for us to clean and prep the track.

“But [PJ1] stains the track. James Hinchcliffe suggested to me that it was the color and not a substance on the asphalt that was the difference. He said the untreated area is much lighter, so it remains cooler than the dark, treated surface.”

Asked if it would be a huge cost to resolve the issue, Gossage replied: “We never let something like cost stand in the way of a race. However, I don’t know that we could have gotten the black stain out of the asphalt, regardless. That may simply require time to oxidize or bleach the color of the asphalt.”

Despite that, the absence of fans, and the fact that Chip Ganassi Racing had a clearly superior setup to its principal rivals on the night, Gossage felt the Genesys 300 had been a success.

“Going into Saturday was risky,” he observed. “No off-season testing here, first race with the aeroscreen, no tire testing… If someone – say, Scott Dixon – hit on a great setup, the race could be a blowout. But if no one had a perfect setup it could’ve been a barn-burner. You never know.

“But the only safe way to do it due to Covid-19 was to not have a chance for drivers to get seat time and to rely on past data on tires. Practice, qualifying and the race had to be compacted into one day.

“And in the end, to the credit of everybody, we had a successful event. Maybe it wasn’t an artistic success, but it was a success. We got commerce flowing back through the sport and that was why we did it; that was the point. Even with these unknowns, we all had to jump off the cliff together. Even though we didn’t know what the outcome would be, we jumped, for the good of the sport.

Round 2 of the 14-race season will be the GMR Grand Prix of Indianapolis, on the IMS road course on July 4, a double bill weekend with NASCAR.

Five lessons and questions from IndyCar in Texas