HILLIARD, Ohio (August 9, 2011) – IZOD Indy Car Series rookie Pippa Mann knew she would have Rahal Letterman Lanigan’s top-flight mechanics and technicians working on her car in her debut with the team this weekend, but the British driver today gained the support of thousands more qualified automotive professionals through a partnership with NTB - National Tire and Battery®.

NTB will be on the #30 Honda/Dallara/Firestone entry for this weekend’s MoveThatBlock.com Indy 225 at New Hampshire Motor Speedway, while Big O Tires® will be featured on the RLL car at Kentucky and Las Vegas. NTB, which is part of the TBC Retail Group, has sponsored Rahal Letterman Lanigan Indy Car efforts in the recent past with Graham Rahal and Jay Howard with not only NTB, but fellow TBC Retail Group partners Big O Tires and Service Central®. 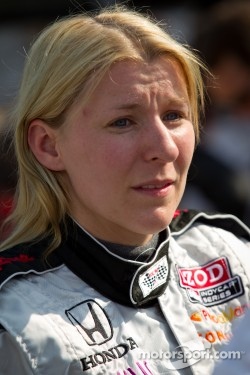 “We are thrilled to have Pippa represent the NTB brand in New Hampshire. Not only is she a fine young lady with outstanding skills behind the wheel, she is building a solid reputation as being a go-getter,” said Orland Wolford, President and CEO of TBC Retail Group. “We look forward to watching her climb the ranks of racing.”

“NTB and all of TBC Retail Group have been great partners to work with in the past, and we are pleased to continue our relationship with this program,” said RLL co-owner Bobby Rahal. “We have high expectations for this program and we anticipate that Pippa will work very hard to represent NTB and the TBC Retail Group as professionally as possible.”

Pippa will be making her maiden voyage with RLL this weekend at Loudon’s one-mile oval, although the former Firestone Indy Lights frontrunner tested there with the team last month. A winner last year at Kentucky in the Lights series, Mann is looking forward to making her debut with a new team and a new sponsor.

"Rahal Letterman Lanigan Racing introduced me Orland Wolford of TBC just under a week ago now. As we were admiring my new car, I think we both thought that the National Tire & Battery Red #30 was already looking pretty racy in her new color scheme, but that there was a little something lacking! Luckily, Orland agreed with me, and I can't thank him, TBC Corporation and Service Central enough for coming on board! I am extremely excited to be added to the roster of Indy Car drivers whom they have supported and I am looking forwards to representing National Tire & Battery and Big O Tires out on track for the remainder of this season!”