Indianapolis, IN (August 9, 2011) - Last weekend took an unexpected turn for Dreyer & Reinbold Racing. Justin Wilson, driver of the No. 22 Roll Coater machine, was involved in a single-car incident in practice for the Honda Indy 200.

During the Saturday morning practice session in Mid-Ohio, Wilson ran off on the exit of Turn 1. As a result, he dropped two wheels off the asphalt and then went hopping through the grass, which then sent the car airborne.

Wilson was transported from Mid-Ohio Sports Car Course to MedCentral Hospital in Mansfield, Ohio by ground transportation and was kept overnight. He was transported to Indianapolis last Sunday to meet with Dr. Terry Trammell and today, he was released from the hospital. Wilson has a stable burst fracture of the T5 with no spinal cord injury. He will be treated with bracing and serial x-rays. Wilson will be unable to drive for a minimum of three months. 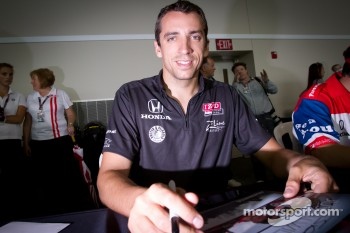 "Obviously, I have a little bit of a backache, but I'm just frustrated to not be at the racetrack. I think that we just started to get our season turned around and the car was really good at Mid-Ohio and I'm disappointed about that. I know that I'm going to miss the ovals and I think we've found some good stuff that was going to help our oval performance. So, I'm just disappointed to not be the car, but my back is the most important thing. I'm going to try and get that to heal and get back to 100 percent as soon as possible and get back in the car. As for myself, I'm feeling good and I'm already thinking about getting back to racing. Also, the response has been incredible and it's really nice to see that rather it's on Twitter from the fans, or drivers and ex-drivers. Everyone has been really supportive, so thank you to all of them. I also want to thank the Safety team, medical staff and AirMed that did the transport from Ohio to Indianapolis. It's been great treatment all the way around. I want to wish the team good luck this weekend and I'm looking forward to see how they do," commented Wilson.

Tomas S will substitute for Wilson this weekend. He will pilot the No. 22 entry. The South African was the sensible choice for Dreyer & Reinbold Racing as he has a lot of experience on ovals and with DRR as well.

"We wish that Justin could be with us this weekend, but right now we are happy that he is okay and we just want him to have a speed recovery. For us, Tomas made the most sense because we had great runs with him last year and he has a ton of oval experience," stated Dennis Reinbold, Dreyer & Reinbold Racing co-owner.

Scheckter came on board with DRR in 2009 competing at ten races for the team. He earned three top-ten finishes (6th- Iowa, 8th - Chicago, 9th- Miami). He ran with DRR last year for four events, including the Indianapolis 500.

The native of Cape Town, South Africa made his way up the racing ladder starting out in go-karts in South Africa and then going on to compete in various racing series in Europe from 1997-2001, driving in the British Formula Vauxhall Junior Series, the Formula Nissan Championship, won the Formula Opel Euroseries, and was runner-up in the British Formula 3 Championship. In 2002, Scheckter drove for Red Bull Cheever Racing, winning his first race from pole at Michigan. That year he also won MBNA pole awards a Texas, Kansas and Michigan and was named the Bank One co-Rookie of the year at the Indianapolis 500. The veteran driver finished career-best seventh in the IndyCar Series standings for Target Chip Ganassi Racing, earning five top-five and 10 top-10 finishes and won MBNA Pole Awards at Texas and Michigan. Scheckter competed for Panther Racing in 2004 and 2005. He finished ninth in the IndyCar Series standings for Panther Racing, earning three pole positions (Homestead, Texas, and Nashville) and his second career victory at Texas Motor Speedway. In 2006, he competed for Vision Racing and finished 10th in the IndyCar Series, recording nine top-10 finishes overall. He ran for Vision Racing again in 2007 finishing 10th in the IndyCar Series and recording two top-five and nine top-10 finishes. In 2008, Scheckter competed in six races for Luczo Dragon Racing.

"Obviously, it's not the circumstances that you want to get in the car, and I want to wish Justin a quick recovery. It will be great to be back with Dreyer & Reinbold Racing and it will also be good to be back on an oval. It looks like a really cool oval that's new to everybody. I'm looking forward to it and I feel at home with the team and I can't wait to get back in the car," said Scheckter.

Decisions have not been made on a driver for the remainder of the 2011 IZOD IndyCar Season.