Sam Schmidt Motorsports driver Dan Wheldon was killed in an accident early in the Las Vegas Indy 300 at Las Vegas Motor Speedway on Sunday. Wheldon's No. 77 Dallara/Honda was caught up in a 15-car accident that sent the Englishman's car into the catch-fence above the SAFER barrier between Turns 1 and 2 of the high-speed oval raceway and back onto the track in a flaming wreck. Safety crews removed the stricken driver immediately to the racetrack's infield medical center for resuscitation and Wheldon was shortly thereafter transported by helicopter to University of Las Vegas Medical Center where he was pronounced dead.

The accident left the large IndyCar field with only 19 drivable cars and a huge debris field on the racing surface that took over 90 minutes to clear. A sense of dread began to settle in over drivers and crews within minutes of the incident as medical updates on Wheldon's condition failed to arrive from the infield care area. A drivers meeting shortly after 5:30 PM EDT concluded with an announcement from IndyCar Series President Randy Barnard that said, "Dan Wheldon has succumbed to unsurvivable injuries incurred in the accident." 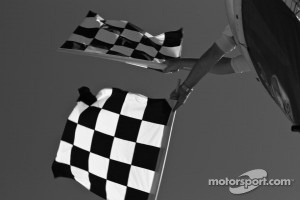 The green flag was unfurled over the field at 3:47 PM EDT and red-flagged at approximately 4:00 PM EDT. After a drivers' meeting, IndyCar officials later cancelled the remaining laps of the race out of respect to Wheldon. The remaining drivers and crews gathered on pitlane, many of them openly weeping, and performed a simple five-lap salute to the reigning Indianapolis 500 champion to conclude the race event and weekend.

Wheldon was a resident of St. Petersburg, Florida and began his IndyCar Series career at Panther Racing in 2002, then moved in 2003 to the Andretti Autosport team. Wheldon won his first IndyCar race at Motegi, Japan in 2004 while at Andretti Autosport. Wheldon went on to win the Indianapolis 500 in 2005 and claim the IndyCar Series season championship for the Ganassi Racing Team. He finished second in the great race for Panther Racing in 2009 and in 2010. Wheldon won the Indy 500 for the second time in 2011, driving for Bryan Herta Motorsports. Overall, he posted 16 victories in 134 IZOD IndyCar Series races.

Wheldon is survived by sons Sebastian and Oliver, and his wife the former Susie Brehm who worked with Wheldon as his personal assistant during much of his career prior to their marriage in 2008. Wheldon, who hailed from Emberton, England, was 33 years old. He left behind also his parents Clive and Sue, as well as three siblings.

“Dan Wheldon was a tremendous competitor, a great racer and an even better person. It was an honor to have him be a part of our team. All of us at Sam Schmidt Motorsports are deeply saddened by his passing. On behalf of everyone at Sam Schmidt Motorsports, our prayers go out to all of his family, especially his wife, Susie, and their two children.”

The 200-lap race on the 1.5-mile oval also determined the IndyCar Series champion as Ganassi Racing's Dario Franchitti was awarded the title after rival Will Power of Team Penske was sidelined by the accident. Neither title contender, Franchitti nor Power, had an on-track advantage going into the event as they started next to each other on Row 9.

"Right now I'm numb and speechless," Franchitti said. "One minute you're joking around in driver intros and the next he's gone. He was 6 years old when I first met him. He was this little kid and the next thing you know he was my teammate. We put so much pressure on ourselves to win races and championships and today it doesn't matter."

"There was a huge accident, and we weren't thinking about the championship race (when the crash happened)," said Chip Ganassi, owner of Ganassi Racing. "I don't know what to think about (a situation like) this." Wheldon drove for Ganassi until 2008 when he was replaced by Franchitti.

“Dan was an Indy 500 champion and IndyCar Series champion with Andretti Autosport -- and one of our closest competitors,” Michael Andretti said in a statement. “Dan brought such enthusiasm and passion to the sport not often seen in motorsports. We will remember Dan’s tremendous racing accomplishments with our team as well his infectious personality. We would like to express our deepest sympathy to Dan’s family, racing team and friends today. Dan is one of IndyCar’s greatest champions.”

A feature tribute on the life of Dan Wheldon will be posted on Monday. 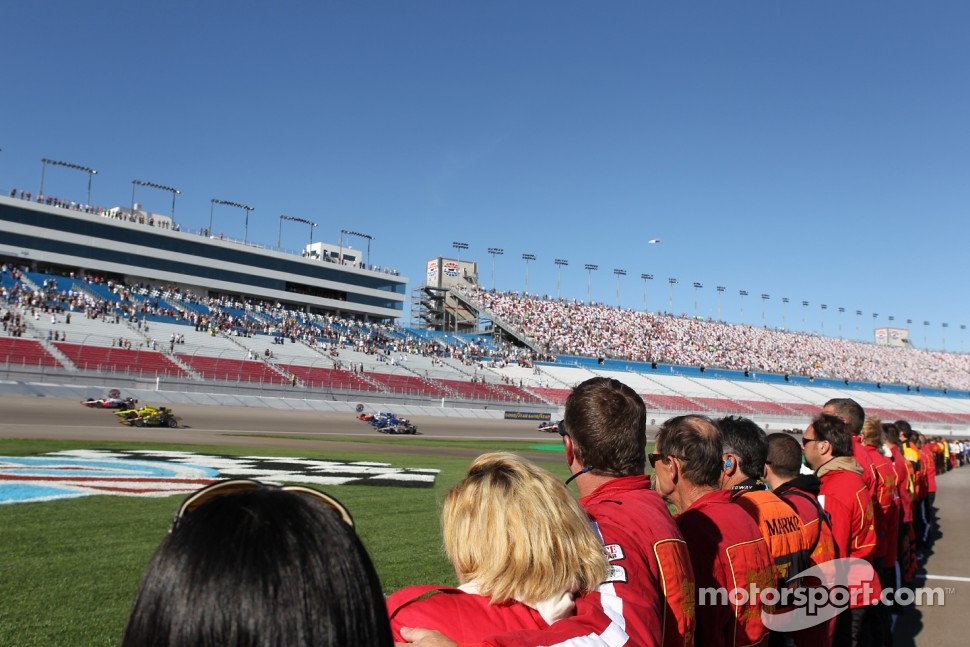