IndyCar aeroscreen's first test – the verdict from the expert 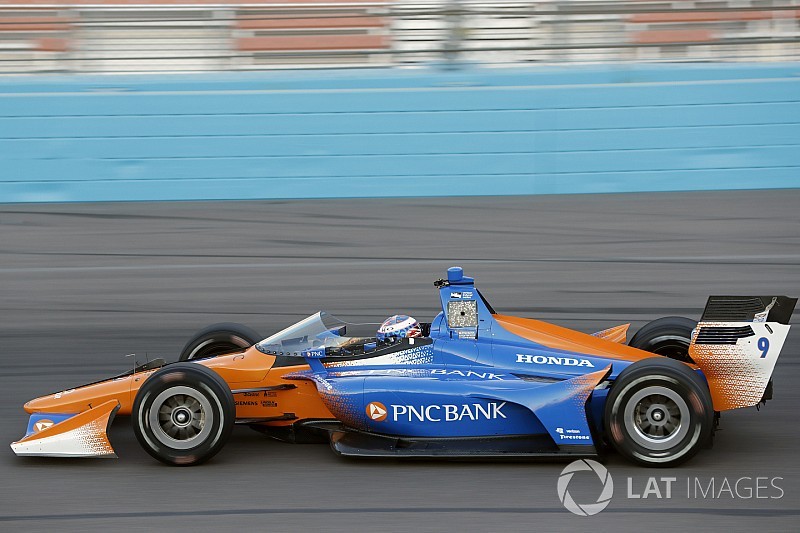 Jeff Horton, IndyCar’s director of engineering/safety, tells Motorsport.com what’s been achieved with the new deflecting windscreen and the next steps in its evaluation.

DM: Following Scott Dixon’s generally positive comments after his test, did the screen fulfill your expectations in its first time on-track?

JH: It probably exceeded our expectations. Scott said there were no big deal-breakers. As we anticipated, the screen prevents the airflow hitting the helmet, so it was really quiet, but it could very hot in the cockpit. We understood that from the CFD studies we’d done, and we also understand there will be some helmet buffeting at some of the faster tracks like Indy because there’s no air on the face of the helmet. So we may have to pump some air into the cockpit to fix that.

This is a prototype screen so PPG hasn’t created a final mold for it yet. Scott picked out a little area of focus change, really minor, and we are sure that will go away when PPG make the final piece for us. We haven’t ‘blessed’ the configuration yet: we needed to get through this test first.

And what is that area of focus change you referred to?

Well like I say, this is a prototype – we have two actually – and when PPG built them, they built a jig and the background had crossection on it so you can see any deformation as you look through the glass. We cut off one of the parts at the front, but there turned out to another slight one down to the left which Scott spotted from the cockpit. But that will be fixed in the final piece. When they do a proper machined aluminum mold, the thickness will be 100 percent consistent.

Is there a way to vary the thickness of it to lose the fish-eye lens effect?

Well, there is no fish-eye effect. The PPG Opticor material is really good and clear, and the information we got from PPG is what decided our shape for the screen. And the most important part of that was to keep a constant radius on the piece – no sharp edges, no big bends. You can look through all angles and you won’t get distortion.

Scott took part in the Rolex 24 driving a closed sportscar and I asked him the difference in feel between the Ford GT’s screen and this. And the difference is the fact that in the Ford, he’s got a roof overhead, so he can’t tell what ‘reality’ is! By that I mean he’s only able to look through glass. In an IndyCar, up above him is visual reality so when he looks through the screen again, he registers that it’s different, and whenever you do that, there will be some magnification, but it’s minimal.

But as Scott said, after 17 years of driving an IndyCar with nothing in front of him, it was always going to feel different running this screen, but you adapt to it.

So what differences do you expect to make to the production version?

The rivets that you see as attachments are something we’re still investigating. We think it may be stronger to put the flange on the outside of the windscreen, so you’d see a smooth shape rather than the boltheads. Actually PPG said they’re not sure if it’s any stronger – fighter jet canopies are mounted the same way – but it’s something worth looking at. We need to make an update with the flange and we’ll examine that next week.

We took one of last year’s nose/shock-covers and modified it to fit this screen. With the production screen, once we’ve finalized the flange, the cover will have a nice shape to it that comes up to meet the screen more smoothly. Dallara helped us with the flange and we’ve given them the criteria of making it look nice, to get rid of the slight step that you see from the side on the test fitting.

You haven’t yet had the aeroscreen-equipped car run behind someone to see how well it responds to track debris being fired at it, and you haven’t run it in the wet yet. How would you expect it to perform?

We think the answer to the abrasion issue will be tear-offs, just like on a driver’s helmet visor, which are made by Race Optics. They’re a really good company that can provide tear-offs for the screen, and at every pitstop, a crew member can tear it off.

With regards to rain, there are so many rain-repelling coatings out there, and we have to decide if the tear-offs stay on, or come off for rain. But the screen sits at about a 25-degree angle and at speed, we’re sure it will dispel rain.

So what’s the plan in terms of the next test?

We will keep this prototype piece intact, and we’ve discussed internally running it on a street course. Time’s limited but we’ll figure out how to do that. It doesn’t take long to fit – we’re talking about 15-20mins. So we may decide in the upcoming races to have a special session to go and run it – we don’t have it nailed down yet though.

Then we’re going to start building our crash-test pieces, with a proper frame. This one was 3D printed, but we’ll build a proper one from carbonfiber and get going.

Sato, Power on top again in Phoenix, as Dixon shunts